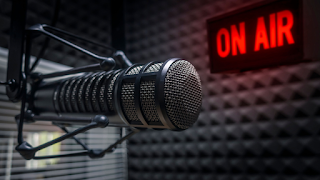 I am increasingly intrigued by the idea of starting a podcast. Apparently it's a relatively simple process. I learned from listening to Cocaine and Rhinestones that Anchor makes it so easy, anyone can do it. I have no qualms about my speaking voice (one of my few attributes!), but I'm only in the early stage of pondering content.

Obviously there are only two or three topics in which I'm proficient, and at the top of the list is country music. One of the few pluses of my advancing years is that I've heard and lived it all. A HUGE drawback of producing a music podcast is that one cannot actually play music. That's an issue.

I'm not afraid of long-form script writing. My little blog posts notwithstanding, I can ruminate on country music ad nauseum. No offense to Tyler Mahan Coe (and I'm a fan), but two-plus hours per episode digs a bit too deep into minutiae. One hour would be ideal.

It's just a spark of an idea at this point. The lack of music is the sticking point. I could sing a capella into the mic, but that's really just not the same. Plus I'd still have to pay for the rights. Those guys are sticklers.

The proprietor of Saving Country Music has recently started his own podcast, which he uploads to YouTube. Not ideal, and his episodes are significantly shorter than Coe's, but it's an option. Again though, he has his own website with which to promote it. I'm nobody.

Everybody needs diversions. This is one I'm going to think about for a while.