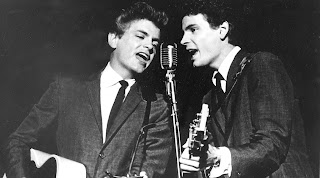 When I was nine, I along with my two closest cousins took accordion lessons (it was something our dads wanted). Music lessons, regardless of the instrument, are a valuable tool -- studying an instrument enhances brain development and memory and concentration, as well as coordination. And it can be fun if the kid is matched to the right instrument. Accordion wasn't for me, but learning how to play pleased my dad, so that was a net plus.

Our teacher decided it would be fun for the three of us to form a little trio. I don't know if it was simply a fun diversion for her or if she actually saw something in us (it was the former, no doubt). Thus, I got moved to the drum (yes, drum, singular -- a snare drum), my cousin Paul stuck with the accordion, and his sister Karen got to learn some guitar chords. For the life of me, I don't remember what we called ourselves -- something Ramblers, I think. Our moms were excited. They outfitted us in fringed felt skirts (not Paul), plastic boots and matching black bolero hats. We memorized our meager repertoire and showed up to entertain at nursing homes and street fairs. I liked performing, really liked it. Our appearances were a welcome diversion. I've always been prone to boredom, and these little entertainment moments stirred up a bit of excitement.

What does this have to do with Don Everly?

Well, our trio's big "hit number" was Bye Bye Love. Though my teacher favored my cousin Karen, she inexplicably gave me the first verse to belt out. I felt like a star. And our version of the song was a hit, at least with the geriatric crowd and later with my uncle's bar patrons, who proffered dollar bills or a couple of quarters to have us sing it again.

So, Bye Bye Love has always held a special place in my heart.

There goes my baby with someone new

He sure looks happy, I sure am blue

Frankly, at nine, the Everly Brothers were a little bit before my time. I'd of course heard them on my mom's kitchen radio, but Bye Bye Love was the only track of the brothers that actually registered with me. My brother, who was nine years older then me and owned (it seemed) every album in the world, possessed their greatest hits album, and I eventually, after I got done secretly borrowing every other LP he owned, got around to listening to the Everlys.

Little kids don't like ballads. Their musical taste is sadly unsophisticated. So I was drawn to more peppy, simpler tracks, like this:

This one, though, written by Don, might be my favorite:

Later, of course, I was introduced, sometimes in a roundabout way (hear me, Nazareth and Krauss/Plant?) to their phenomenal ballads.

(best quality video I could find)
As my tastes (and I) matured, I grew to love the Everlys' ballads, like these:

Their hits that were written by Felice and Beaudloux Byrant weren't among my favorites (except for Bye Bye Love), maybe because they smacked of novelty songs, although Wake Up Little Susie wasn't bad. (Don's opening guitar riff improved the track by miles).
In 1984, when an Everlys track blasted out of my radio speaker, I was happy. Though this is nowhere near the best song Paul McCartney ever wrote, it's all in the presentation, kids:
What did the Everly Brothers do for music? From The Guardian:
Quite aside from the Beatles, the Everly Brothers were feted by everyone from the Rolling Stones – Keith Richards hailed Don as “one of the best rhythm guitar players I’ve ever heard” and called their voices “almost mystical” – to the Beach Boys. Paul Simon called them “the most beautiful-sounding duo I ever heard”, Bob Dylan claimed “we owe these guys everything – they started it all”, while Neil Young suggested his entire career was based on trying and failing to sound like them.
The duo fractured acrimoniously in 1973 and would remain broken for almost ten years, until a breathtaking reunion concert at Royal Albert Hall in '83 reminded everyone of the treasure we'd all been missing. I can't count the number of times I watched the concert on HBO; then ran out and bought the live album. I'm not sure I really, truly appreciated the brothers until then.

Nobody (nobody) is going to come along to replace the Everly Brothers. And that's okay. Some artists are considered singular for a reason.

And thanks, Don and Phil, for providing me with my short moment in the sun.

I've sung a lot of songs in my life. Granted, most of them were to my reflection in the mirror, but it still counts. When I was a kid, around seven or eight years old, my heart's desire was to be a famous singer. I had no particular talent, but I sounded pretty good to myself in the backyard, performing atop the picnic table. I loved music with my whole heart and if I could only play piano, my career ambitions would be realized. Alas, my dad thought the accordion would be nifty, so off I toddled to lessons downtown. I don't recall having a voice in the ruling, nor any objections. Dad didn't make a lot of the decisions in our household, so when he did, he meant business. Admittedly I was curious about how to make music and if I could actually do it, but oom-pah-pah wasn't my first choice.

Dad's younger brother, always readying to copy whatever Dad did, swiftly enrolled both his kids in lessons, too. Thus I got to be admonished by my teacher, "Karen doesn't drag her basses like that." Accordion solos are supposed to be crisp. I preferred a longer, drawn-out, sound, so I chose not to snap those buttons like they were meant to be snapped. Or maybe I was simply lazy, lethargic; bored.

Our instructor, however, hit upon a great scheme ~ form a trio, Paul, Karen, and poor pathetic me. She broadened her horizons from simply accordion and assigned each of us our own instrument. Paul got to stick with the squeeze box, but Karen (the favorite) was taught some chords on acoustic guitar, and I was given a couple of brushes and tasked with swishing them across a snare drum. We commenced practice in the basement studio, then set off to entertain elderly residents in nursing homes. We were nine, ten, and eleven; so the shut-ins found us cute and strained from their wheelchairs to pinch our cheeks. Our confidence grew. We started to believe our own publicity.

We advanced to street fairs and downtown Crazy Days. Paul and Karen's mom sewed costumes for us ~ fringed black billowing skirts for Karen and me; matching western shirts for the three of us; dime store plastic cowboy hats. I think we may have even had faux-cowboy boots. I sadly can't recall what we called ourselves; maybe something like The Westernaires. Karen could tell me, but she's most likely not reading this.

It wasn't until we moved in 1964 to my bachelor uncle's establishment that we realized some return on our efforts. There, we made serious coin ~ playing just outside the bar for tips. Even then it was sort of a drag, having to change into our costumes after school and dragging out the caved-in snare drum; screwing it into its stand. But money was a motivator. If you're ten years old and can't get anything new without begging your mother for money, being an independent contractor was heaven. And tipsy patrons are exceedingly generous. Each of us toddled down to the local Woolworths and bought amber-tinted glass piggy banks and proceeded to fill them. We were rich!

I learned that performing the same song over and over, though, wasn't all performing was cracked up to be. Even then I could grow bored in a hurry. I wished we could change our repertoire, but without our accordion teacher in close proximity, the three of us were adrift.

My singular claim to fame was that I got to sing the opening verse of "Bye Bye Love". Seeing as how I was the weak link in the chain, I considered it a high honor. I still don't know how I obtained it.

Today whenever I hear The Everly Brothers and that guitar riff, I'm whisked off to those days; and I sing along with pride:

Once upon a time, I was a world-renowned singer.