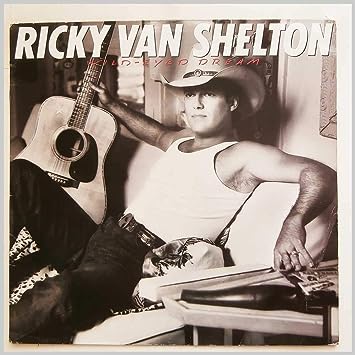 I think it was my older sister who first introduced me to Ricky Van Shelton. Carole was not necessarily a music aficionado; she just liked what she liked. She'd breeze in from Texas once a year and lay down the gauntlet of songs we all needed to hear. As an example, she was an early fan girl of "The Devil Went Down To Georgia", and I thought, well, okay...

Like all music people tell me I need to like, I was naturally resistant to Ricky Van Shelton. I think he had a cover song on the charts at the time, and I was inherently scornful of artists who earned their chops by copying someone else. Grudgingly, however, I went out and purchased Van Shelton's debut CD, "Wild-Eyed Dream". I was buying CD's like they were candy gumballs anyway, so what was one more pointless purchase? Turned out the album had some original tracks that beat the covers all to hell. A hot artist, I'm assuming (maybe naively) should have his pick of songs; so why Ricky recorded so many cover songs perplexes me. Maybe he simply wanted to memorialize the classics. Regardless, I preferred the songs I'd never before heard, like this one (of course the official video is unavailable ~ because we need to scrub the late eighties/early nineties from everyone's consciousness):


Those two tracks alone, never mind all the covers, made the album an A plus for me.

There's myriad reasons why shiny careers fade ~ the label loses confidence; tastes change. Not everyone can be a George Strait, with choice songwriters breaking down their door. Ricky Van Shelton's career suffered from either the lack of good original song choices or his own proclivities. I would have loved to see Ricky perform in a bar setting ~ his natural milieu was stacked speakers, a thumping bass, and a telecaster.

That aside, he recorded a great rendition of "Statue Of A Fool", whose original recording by Jack Greene suffered from the lack of a great singer:


My sister was right. I'll cop to it.

After all these years, he deserves more than a faint memory. Number one, he needs a website that isn't lame ~ Ricky, are you listening? I would link to it, but I don't want anyone to be embarrassed. Wix dot com is essentially free ~ even my band has a site.

Granted, Ricky retired in 2006, which is almost unheard of in the music business. Retire? The brittle-boned Rolling Stones are still touring, for God's sake! According to his pitiful website, he's a painter and a collector (still need a site to sell your paintings, though.) Maybe the good songs weren't forthcoming; maybe he just wanted to enjoy life off the road. More power to him.