Sixty-Four Years of Music ~ The Seventies 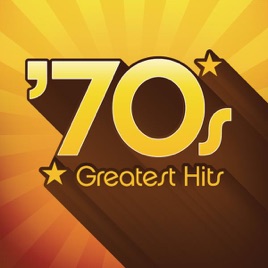 The decade of the seventies was a strange time. It was garish. Color TV was still relatively new and televisions either couldn't quite get the colors right or that's how everything actually looked, which is actually worse. Reds were REALLY RED; orange was flamboyant and pervasive; lime green was somehow a desirable color. It was a visual assault. No wonder everyone was so uptight.

Early seventies TV shows tried to straddle the line between budding social consciousness and corny catch-phrases (Dy-no-MITE!) Hit sitcoms included Sanford and Son ("It's the big one, Elizabeth!") and Alice ("Kiss my grits!"), and everyone was in the doldrums because they couldn't fill up their gas tanks and the usurers were lending money at eighteen per cent interest.

Living room rugs were a thick shag that had to be raked (with an actual rake) and was either burnt orange or avocado green (to match the kitchen appliances). A hit song was all about some dude talking over his CB radio, which no one but long-haul truckers actually owned. My little brother taunted me with his Rubik's cube, which I could never solve nor never cared to; but twisting its sides around acted much like a stress ball, until I got sick of it and tossed it into the dense carpet, never to be unearthed again.

Everyone who was anyone, and those who were no ones had a variety show ~ Tony Orlando and Dawn, Sonny and Cher, Donny and Marie, Flip Wilson; and they all featured the same rotating cast of musical guests ~ Jim Stafford was a mainstay. Ray Stevens showed up a lot. Mac Davis was a pain in the ass, because he was everywhere on TV and never had one song that wasn't boring as a dead fish.

AM radio was the tether that cloistered us.

I was in high school in the early seventies, and I separate the decade into two parts. Because the first half actually yielded some classic tracks. Or maybe I was just seventeen.


Songs that Alice and I sang along to in the car:

It wasn't so much that we liked this one, but we couldn't ignore it. After all, it spoke of the "pompatus of love":


This was pure gospel:


A new guy who seemed to have two first names pierced my soul with this song:

If this man had never written another song, he'd be legion with this alone:

But he also had this one:


In the second half of the seventies, music got away from...I guess, trying. Pop culture was curious. Sitcoms apparently longed for the distant past ~ Happy Days and Laverne and Shirley were set in the fifties. And almost all TV comedies were written at a sixth-grade level, which is why it was a revelation on the rare occasion when a smart one came along.* On Three's Company, poor John Ritter spent the half hour leering, while the dumb one (which is relative), Chrissy naively uttered double entendres. A smash hit when it debuted, Welcome Back, Kotter became famous for stupid lines that became cultural touchstones, like "Ooh ooh, ooh, Mister Kot-TEER!" and, of course for that new guy, John Trav...something. And not content with two hit series, Garry Marshall created another idiotic one about an alien, launching the career of a hairy guy named Robin.

*The smart one was Barney Miller.


In fashion news, polyester reigned! And not today's polyester-cotton blends, but a springy extraterrestrial fabric that could withstand a Chernobyl-like meltdown and still look "pretty". Culottes were also a thing. Sort of shorts, but you could wear them to work. The worst fashions were actually worn by men, who were somehow talked into dressing like a Times Square pimp ~ leisure suits (polyester, of course), gold chains, gaudy flowered (polyester) shirts with butterfly collars. And don't forget the long sideburns.

Voters elected a peanut as president; and not just any old peanut, but a truly hapless legume. Never fear, however; everything he failed at he simply blamed on us (and by the by, I didn't vote for him).

No wonder the music became outlandish. Here is a sampling of hit songs from the last half of the decade. You be the judge:


(And I didn't even know that the late political commentator Alan Colmes had a seventies gig as a soft rock singer!)

It's a giant leap from Gordon Lightfoot to the Village People, but there was a lot happenin' in the seventies. Musically, one could say that the seventies saw the biggest transformation of any decade; not necessarily for the better. Personally, changes proliferated. I went from a high school girl to a mom twice over. I accepted that I had to grow up, although my quest wasn't entirely successful.

I'm still working on it.