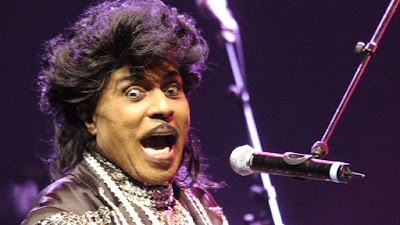 1950's rock was so joyous.It may have had to do with the times. Music reflects the culture that begets it. From what I know of the fifties, the times were bland. Think Dwight D. Eisenhower; Arthur Godfrey; Perry Como. A boxy wooden radio in the kitchen; squiggly lines on a black and white TV with rabbit ears. "How Much Is That Doggie In The Window". White T-shirts and jeans with thick rolled-up cuffs.  Bobby socks and saddle shoes. Felt skirts and Peter Pan collared blouses. Kids were itching to break through the dreary fog, but they had no idea how. Listening to Dad's music -- Pat Boone, Patti Page, Paul Anka, and Rosemary Clooney -- just wasn't cutting it.

Then along came some crazy flamboyant acts -- out of nowhere. A greasy-haired pompadoured guy from Tupelo, Mississippi who could wiggle his hips; a poet from St. Louis who had a way with words and with a Telecaster; a Lubbock, Texas hillbilly with a hiccup in his voice; a New Orleans piano master with a deep voice; a Sun Records phenom with a straggle of blond bangs who set the black and white keys afire. And a Macon, Georgia black eye-lined, lipstick smeared screacher.

What was this? You mean there's life out there? People can be emotional? Show some enthusiasm? Mom told us that was bad. Our priest warned us against it.

Some guys from Liverpool covered the song, but not as well:

I learned that Little Richard employed unknown artists such as James Brown and Jimi Hendrix as members of his backup band. I also know that a Minnesota artist named Prince cut his teeth on Richard Penniman songs. It's rare to be a pioneer -- there's not much to discover anymore. Little Richard was a real one.

Ain't That A Shame

I will be the first to admit that good music existed before I realized there was such a thing as music. The fifties were before my time, but so were the forties, and I am a big band fan. I missed the roots of rock 'n roll -- my sisters experienced it. Chuck Berry, Buddy Holly, Little Richard...Fats Domino.

Little kids have weird fears. Low voices scared me. I remember my Mom and Dad had a '45 record recorded by Lawrence Welk's band (they were big Welk fans) -- I think it was called "Grandfather's Clock". The singer had a deep bass voice -- scared me to death. His voice reminded me of that man who hid behind the tree at night when I had to run out to the little house in back to go to the bathroom. (Oh yes, there was a man who hid out there, just waiting to grab little girls).

I was a flower girl in my cousin's wedding when I was three years old. My cousin's fiance scared me to death. He had big bushy eyebrows. When I would be over at my cousin's apartment and her fiance walked through the door, I would stare in horror at those eyebrows, afraid to take my eyes off them for fear they would attack me. And by the way, making a little kid be a flower girl sounds like a cute idea. She's essentially there as entertainment for the adults. "Ahh, isn't she cute? Oh look! She turned around and walked the wrong way down the aisle! Now she's plopped herself down on the altar steps! So sweet!"  Well, guess what? A three-year-old has no earthly idea what she's doing there and why exactly she's being made to perform. I initially bought into the idea of being a flower girl, because I liked flowers. Unfortunately, the experience didn't live up to its hype. I don't recommend it. And then you have the requisite photo session after the wedding, when you're cranky and all you want to do is take a nap. And Mom's no help, because she's just praying you don't embarrass her. Mom refuses to even claim you as her own.

This is a roundabout way of saying that Fats Domino's voice scared the little kid that was me.

My sisters had this single, which I now acknowledge, especially after finding that Richie Cunningham favored it, is a really good song:

I later caught up with the roots artists. Sometimes I found them when country artists would re-record their hits. I think Hank Williams, Junior did this song:


Fats, of course, had other hit songs, like this one:

The last time I gave a thought to Fats Domino was during Hurricane Katrina, when newscasters announced that he was "missing". I thought, oh, that poor old man. He was later found and all was well. At some point, a bunch of artists got together and recorded a tribute album and I bought it. It introduced me, or reintroduced me, to some great songs. And I was no longer scared. Of course, I was older by then, no longer afraid of bushy eyebrows and men laying in wait behind trees.

I believe Fats Domino was a humble man who stayed true to his roots.

And he made some awesome, pioneering music.

I'm glad I finally caught up with it.

I broke my toe on the bathroom door two nights ago (and they said it couldn't be done!)

So, here's a video to make me feel better.

For someone like me who likes to bitch about the state of music, I have to admit, 2007 was pretty darn good. You just needed to know how to find the good stuff.

I've read a bunch of critics' lists of the best CD's of 2007, and unfortunately, I haven't had the opportunity to hear them all. The critics could well be right. After all, they did list most of my favorite CD's of the year.

Critics whose opinions I value include Chet Flippo (of course) and Jon Bream, who writes for the Star Tribune. I also like to read Entertainment Weekly's opinions, although their demographic is, admittedly, younger. I also perused the list that No Depression Magazine compiled.

So, here's where we agree:

"Magic" - Bruce Springsteen (the prettiest song of the year, "Girls In Their Summer Clothes")

Some mentioned "The Bluegrass Sessions" by Merle Haggard (produced by Marty Stuart).

At least one list included "In A Perfect World" by Gene Watson.

I would also include The Eagles, "Long Road Out Of Eden" and "Goin' Home - A Tribute To Fats Domino".

I'm sure there must be new artists who are great. I hear there's some British gals who are pretty good.

What I know is, the artists who produced the best music in 2007 (in my opinion) have been around since the 1980's or longer:

I don't know what this means. A cynic would say, there are no good new artists on the horizon. I don't believe that. I guess we just don't get a chance to hear the new, good ones.

But thank God for the old ones!

And here's an old one:

Luckily, I read magazines in my spare time, or I would be ignorant to new, interesting CD's.

So, my mission was to find "Goin' Home - A Tribute To Fats Domino".

Luckily, my local Borders had it in stock. Buying music is a pain, which is why I rarely buy any. Face it, most new music is a waste of money and time.

To digress for a minute, do you have a hard time finding good music in your local stores? I do. The closest store to me is Target, which carries the newest offerings by Tim McGraw and Kenny Chesney, et al, but would I find "The Bluegrass Sessions" by Merle Haggard there? No. I never buy CD's at Target, because they don't have anything I would want.

We do have a local, independent record store close by, but their selections are minimal in my categories. My categories being, I guess what you would call Alt Country. What used to be just "country" back in the day. Artists like Dwight Yoakam, Marty Stuart, Gene Watson. My other category is older rock artists who sound more country than the so-called country artists of today. Those would include The Eagles, Neil Young, John Fogerty, Tom Petty.

So, I do most of my music shopping online.

You can find anything you want online (I usually shop at Amazon). BUT what if you want music NOW? What if you don't want to wait five business days to get your music?

Oh, you can download music (again, I use Amazon. And if the song I want is unavailable on Amazon, I go to ITunes or WalMart).

That's all fine and dandy if you want just a song or two. Even if you want a whole album, unless it's an artist you cherish. If it's Dwight or George or Marty, for example, I want the actual physical CD. It's just a personal pecadillo of mine.

So, back to my shopping (returning) expedition today. I headed off to Borders, hoping that I could find "Goin' Home". I returned my two CD's (the lady was rather rude, by the way). Then I went off to flip through the CD racks. Surprisingly, I found it rather quickly. And it was worth it. This is a double CD, with artists such as Paul McCartney, Neil Young, Robert Plant, Willie Nelson, Lucinda Williams, Elton John, Randy Newman, Bonnie Raitt, Norah Jones, and many, many more. Also lots of New Orleans blues.

I am very much enjoying it.

So, here's a promotional video for the CD that I found on YouTube: