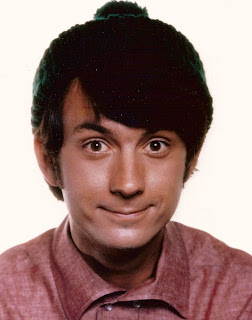 My first teenage crush was the Monkees. But it was an odd crush ~ I claimed the group as my "friends".  At eleven my world was upended when my parents up and moved us to a new town in a new state. I was at that awkward age, and being painfully shy didn't help matters. Barely anyone in my new class talked to me, and I sure wasn't about to initiate a conversation. Thus, the highlight of my life was alighting the bus on a Monday afternoon, tromping up to our cramped apartment, and waiting 'til seven o'clock, when The Monkees TV show came on.

I had a study hall period in the middle of each day, a cavernous hollow room on the second floor of my turn of the century school. It held approximately one hundred desks, with the study hall teacher perched at his own desk high up on a stage in the front. I don't know what any of the other kids did (I suspect "studying" wasn't one of those things), but as for me, I whipped out a spiral notebook and my multi-color pens and wrote letters to each individual Monkee. I think Mickey got the green pen, Davy the red, Peter was assigned the blue, and Mike the purple. Of course I didn't actually mail any of the "letters" (duh); in hindsight I think they were a way for me to spill my guts and my loneliness. I took them very seriously.

I didn't even particularly like the TV show, except for the songs. But these guys were my friends, so I sat through a half hour of silliness in solidarity.

Most girls favored Davy Jones, but Mickey Dolenz was my favorite. Peter Tork was just a goofy guy who sometimes plinked the piano. Mike was a puzzle. He never got to sing lead on any of the hits. He just stood there strumming his guitar, wearing his green knit hat, but he seemed happy enough to be doing what he was doing.

I read later that Mike didn't like being part of The Monkees, that the formulaic tunes picked for the group cramped his style. This turned out to be a myth.

Nesmith's roots were apparently in country rock, but to be honest, after the group broke up I didn't follow his career. I do know that Linda Ronstadt grabbed this Mike-penned song after the Monkees' producers nixed it for the group:

The last performance of the two remaining Monkees:

Hi! How are you? I'm in study hall right now. It's really boring. I don't really have any homework to do. I'm supposed to be working on math problems, but they don't make any sense. Math is stupid.

My school is really old. I think it was built when the first settlers came to Mandan. It's kind of dark. Every sound bounces off the walls. You should see this room. It's huge! A teacher I don't know is sitting at a desk on top of the stage. I think this must have been an auditorium in the olden days. Some boy just dropped his textbook and everybody jumped from the racket.

I hate this school. Sometimes I have nightmares about its big wide staircase. Stupid boys like to make fun of shy girls and pull their hair or make mean comments when I'm just trying to go up to the second floor to my stupid earth science class.

How's Hollywood? I wanted to come out and visit your psychedelic pad, but if I miss school my mom will be mad. Maybe this summer.

I really like your new song "I'm A Believer". Mickey, you really play groovy drums and I love your singing! Thank you for asking me to sing on your next record!

Davy, your tambourine playing is so cool. Peter, you are so funny! I laugh a lot at all the funny predicaments you get into. Mike, I really like your hat. I watch your show every Monday night.

If you get the time, could you come and visit me? I haven't actually met any friends yet.

Well, the bell's gonna ring so I'd better finish this up. I just wanted to say hi.

I learned yesterday that Peter Tork passed away. Unless you were a twelve-year-old girl in 1967, Peter's passing probably doesn't mean a whole lot to you. Especially if you weren't a twelve-year-old girl who'd just moved from the only home she'd ever known to a new town, a new state; had a supremely dysfunctional home life and no friends. The Monkees were my 1967 lifeline.

I don't know why I glommed onto The Monkees, except that they were accessible ~ there they were on NBC television, reliably, every Monday night at seven p.m. We lived in a cramped apartment behind my mom and dad's newly purchased motel. I shared a cupboard-sized bedroom with my three and four-year-old siblings and aside from the spare minutes during which I could drop the stylus down on a 45-rpm record and spin Neil Diamond before my little brother and sister wandered home, my only refuge was the broiling console TV squatting in our living room.

The Monkees were my lifeline. I did sit in a cavernous room with about a hundred other kids I didn't know, whiling away my time. And instead of completing my homework assignments, I wrote letters to each of The Monkees. I had different colored pens I used for each of the four band members ~ red, green, blue, and purple. Each of The Monkees received personalized letters that I never mailed.

The me that exists today would say those letters were a means of working out my feelings. That sounds good. I did have a lot of emotions I was not allowed to express, because what did my problems matter, really, when Mom and Dad had so many issues to sort out ~ prime among them that they were both crazy?

I think my first cognizance of The Monkees was "Last Train To Clarksville", which was included on an LP that my big brother gave me as a birthday gift.

As a marketing concept, it was prescient. Much like with the Beatles, I was primed for what was yet to come. I'd not even yet laid eyes on The Monkees, and already I was a fan.


The Monkees had superb songs. And here's a tip that you can only glean from a twelve-year-old girl: We didn't give a F if Mickey, Davy, Peter and Mike didn't play their own instruments on their records. How would we even have known that?? Music was magic that emanated from our transistor radios. Magic. If I'd learned that someone called The Wrecking Crew had cobbled these songs together, it would have made zero difference to me; and twelve-year-old me wouldn't have bought into it anyway. After all, I saw with my own eyes Mickey beating on the drums and Davy banging his tambourine. And Peter doing something on the piano and Mike Nesmith strumming a guitar and looking bored (Mike was, needless to say, my least favorite Monkee).

I don't think I was even cognizant that the group was pre-fab. Subliminally I knew the four of them didn't actually share an abandoned flophouse. But before their TV show had debuted, they were just another pop group on the radio like The Beau Brummels or The Buckinghams, only more exciting.

The Monkees came along at about the same time my family was making the move to our new life. The reality of my new existence did not match my initial euphoria. I was too shy to even know how to begin to make new friends, and frankly, I needed to scope these strangers out first to know if I even wanted to be friends with them. When you go to the same school from kindergarten through sixth grade, you don't worry about making friends. Your friends are always just there. Friendship doesn't require any thought or effort. Kids don't react well to a new shy person. They just avoid you ~ you're weird; there's something wrong with you. Maybe you are developmentally disabled.

So, I sat in study hall from 11:00 to noon and wrote letters to The Monkees in my spiral-bound notebook...with different colored pens.

The Monkees TV show only lasted two seasons. By the end of its run I'd found a best friend and the group's significance to me had faded. Mickey, Davy, Peter and Mike had filled my friendship void, though, when I desperately needed someone.

To celebrate Peter's life, here are some of my favorite Monkee songs:


My personal favorite (thanks, Carole King):


Like most memories, I guess you had to be there. "Being there", though, wasn't too much fun. The Monkees, however, made it at least endurable.

Thanks, Peter, for being my pen pal. Say hi to Davy for me.