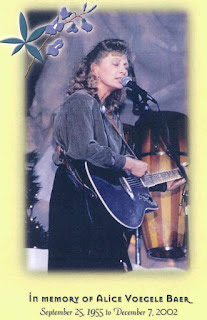 So, I flipped my calendar over before I left work today, and noticed that Monday is September 25th. That’s Alice’s birthday.

Alice would have been 51 on Monday. Wow, a lot of time has passed!

I met Alice when I was 11. Our family had just moved from the farm in Minnesota, since my mom and dad had decided to get the hell out of farming and buy a business. At first I was excited to move, until I realized that I was leaving behind all my friends, and would be thrust into a new school situation, where I would be the “new kid”. Yikes! Bad age for that, too. You’re all self-conscious about yourself anyway at that age.

It was creepy that first day - and of course, it was in the middle of the school year, so all the friendship ties, if they weren’t already established years ago, were at least established by the time I got there in December. It was sixth grade, so we still had recess. So, I sort of tagged along behind some people who seemed semi-friendly, but it was really excruciating, especially for a shy girl like me. That kind of went on for a couple of weeks, and it didn’t get any better. I just sort of hung around on the perimeter of whatever group would let me stand there with them, while they gossiped about people I didn’t know.

As I became a bit more comfortable in my class, or at least at the point where I felt like people weren’t staring at me when I walked in, I noticed this girl who seemed to react to stupid things the teacher said with the same sense of amusement that I did. It was sort of like Jim and Pam on “The Office”, where no one else got it, except for the two of us. And I guess she noticed that, too. So, we struck up a conversation, and she was really nice and really funny. We both shared that observational type of humor that was a little bit off-kilter, so we’d always be cracking each other up, pointing out other people’s actions or things that they said and sharing an inside joke about it.

I soon found out that she was really out of the mainstream as far as music was concerned (for our peer group, that is.) She told me in no uncertain terms that she liked country music, and in fact, she was in a band with her brother and her uncle. Well, that was cool! I liked music and singing and stuff like that. I was still listening to The Rascals and The Monkees, etc., etc., but there had been a time in my life when I’d listened to the music that my mom and dad liked - which was country. So at least I didn’t come across as a complete moron when she talked about music (and one did NOT want to be a moron at age 11.) So, I quickly switched my loyalties to country music - ha ha. You know the song, “I Was Country When Country Wasn’t Cool”? Well, it was NOT cool to like country music at that time! But I had a friend!! So there!

So, things quickly became better for me. We entered junior high together, and continued on our merry way. I would go over to her house a lot, and I liked watching band practice. I liked her family, too. They always had lots of people over and there would always be lots of music and fun. So, I decided I would save up my money and buy a guitar. I cajoled her into teaching me some chords, and she’d come over every Saturday for awhile and show me stuff, and I practiced a lot, ’til I got to where I could play along with the songs on my…….oh, I guess they were “albums” then.

And yea, this part from “To Talk To You Today” is totally autobiographical:

All those Merle Haggard songs

Man, he had a way

And the intro to “Detroit City”

I remember it today

Well, we went through junior high together, then high school, and we had a blast. We laughed a lot in the school library, and got a few dirty looks. We were supposed to be studying or researching or something, but it was all too boring, so we just had fun.

On Friday nights in our little town, all anyone did was “drag Main”. There really wasn’t anything else for a teenager to do, so we’d put a dollar’s worth of gas in her car and drive up and down Main Street, me smoking, her tolerating it. And we’d meet up with people in the Big Boy parking lot, sometimes jump in their cars and drive up and down Main again, get out, get back in Alice’s car and repeat the same procedure over and over.

We didn’t even care, because we were out of our parents’ houses and off on our own. We met some boys, had some dates (usually double dates). Usually, either I’d like the one I was with and she hated her date, or vice versa, so it never really worked out too well - ha ha.

We sang along with “Drift Away” by Dobie Gray, and I’d laugh whenever an extra person joined us in the car, because I’d always end up in the middle, and whenever “Stuck In The Middle With You” came on the radio, I’d get to sing, “Clowns to the left of me, jokers to the right; here I am, stuck in the middle with you.”

When we graduated, we thought, oh, time for an adventure. So, the best place we could come up with was Winnipeg, Canada. What a lousy trip that turned out to be - ha ha. We had very little money, so we drove up there, found a real fleabag motel, got some Molson Beer, and basically just drank and watched TV, because we were in a seedy part of town and were too afraid to go out after dark. We found this diner nearby that was frequented by bums and other undesirables, and we ate really, really fast. It was so pathetic, I’m laughing about it now. So, that was our big GRADUATION TRIP. The part I remember the best, though, was just driving down the highway and singing along with the radio and laughing, having a good time.

After that last summer, things started to change. We got jobs and I ended up getting engaged, so our lives went in different directions. She continued singing with the band, so her weekends were full. Once I was married and had my first child, we really were on different life paths. So, we never really reconnected after that.

We’d go out to see her band once in awhile, and we’d talk a bit, but it wasn’t like the old times.

So, a big part of my life ended really, and a whole new chapter began.

Flash forward to a phone call I got in December of 2002. Alice had suddenly taken ill and had died.

Hmmm……….tough even thinking about that now.

So, I just wanted to write something about her, but I didn’t want to make it maudlin. I wanted to remember all the fun we had.

My husband says if it wasn’t for Alice, I wouldn’t even be doing music now. I’m not sure. But “To Talk To You Today” was the first song I ever wrote, in December of 2002. It’s still my sentimental favorite. We recorded that song on September 25, by the way.

She was a really cool person, and she really got a kick out of life. It’s nice to say I had a friend like her.