Have You Been Affected By Alzheimer's?

Most of my blog posts tend to be humorous. There's a method to my madness. It's better to be funny than to face up to things that one doesn't like to think about.

I watched the PBS program, "The Forgetting" yesterday and today (I'd recorded it).

My dad had Alzheimer's.

If you've had a close family member afflicted with Alzheimer's, then you know how I feel.

Do you question yourself a lot? When you do something stupid or forget something that seems elementary, do you start to wonder? I do.

I'd moved to another state by the time my dad was diagnosed with Alzheimer's. He'd been forgetful for awhile, and we'd all made jokes about it. We never thought it was anything more than Dad's "eccentricities". He'd always been a "go my own way" kinda guy.

We went back for a visit in 2000. My mom told me that she had to set a place at the table every night for Dad's imaginary friend.

It wasn't as bad as I'd expected. He repeated himself a lot, but that was kind of the norm for my dad.

When my husband and I went to bed that night, I laid awake and listened to Dad talking to his "friend" in the living room. It didn't upset me. He talked in a real soothing voice, explaining things to "her". It was sort of comforting in a way. It was the way my dad had talked to me when I was a little girl. I fell asleep that night, drifting off to the sounds of my dad's reassuring tones.

Stupidly, I didn't give thought to the strains that my mom faced on a daily basis. She was a saint. Really. She dealt with my dad's illness every single day. He'd get up in the middle of the night, shave and get ready for "his day". She'd have to wake up and follow him around to make sure that he didn't do anything dangerous (he was a smoker).

I was going to go see him in 2001. By then, he was in a nursing home. My mom just couldn't handle him anymore. He'd driven the car to the convenience store a couple of blocks away to buy smokes, and he became confused and couldn't find his way home. That was when the keys were taken away.

But one week before our trip, I got a call. Dad had died. Pneumonia.

My sister-in-law said that all she wanted was to hear him call her "Katy" one more time. At the end, he only spoke in French. French was his first language. Over the years, when I'd ask him to say some words in French, he'd say that he couldn't remember any of it. At the end, that's all he could remember.

I really, really wanted to see him one more time. Surely he'd recognize me. Surely he wouldn't forget his little girl.

Maybe it's better that I didn't have to face that disappointment. Because he wouldn't have known me, either.

Maybe I'd rather remember the things that made my dad special and unique. He liked to whistle. He used Brylcreem in his hair. I used to watch him shave and style his hair in the mirror. He smelled good.

He would latch onto a food he liked, and eat it all the time, until he got sick of it. (I do that). He'd find the corniest things hilarious, like that old commercial for Nut 'n Honey cereal. He'd always find a way to work the phrase, "nuttin', honey" into a conversation.

You could never snap a picture of him without him making some kind of funny face or gesture. That's why those "formal" portraits that he had taken with mom don't even seem like him. Too serious.

He was a good listener, but he didn't give advice unless you asked him to. And when he did give advice, he really put a lot of thought into his answer.

In his retirement years, he fussed over his garden like a cat fusses over its fur.

He was very neat and tidy, except he always had to drink coffee from the same white coffee mug. It was stained brown.

He generally did not like to eat food that was prepared in someone else's kitchen.

It's been seven years since Dad passed away.

Like others who have a loved one afflicted with Alzheimer's, I wonder sometimes. I'm 53; not a spring chicken anymore. One tends to think about things like that.

If it does happen to me, I can't say that I'll speak French, since that would be quite a feat, considering that I never learned French.

So, this post doesn't serve any purpose, really, except for me. It's nice to think about my dad and all the things that made him unique. 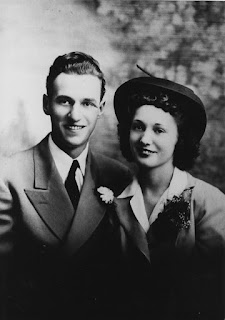 He looks like my son, Matt. A lot. He was nineteen. I guess, considering, he had a good long life. I have his smile.

Maybe all we can hope for is a few years that fly by really fast. I mean, he was nineteen. He was diagnosed at what, seventy? That's a good long life.

Anyway, here's a song I wrote for my dad. I was just a new songwriter when I wrote this, so please excuse the amateurish quality. My dad was a farmer for the first 40 years of his life. This song is about that.