If you come from a small town, that doesn't automatically make you a rube. It's not Mayberry RFD, after all.

I always sort of resent the way people make fun of people from a small town. It's as if "population equals intelligence".

Well, I came from a town of about 50,000 residents, and moved to an area of about a couple of million, and I'll attest to the fact that the intelligence level has only diminished as the population has soared.

Yea, maybe we didn't have a lot of stuff to do in our small town, but what do you do? Do you go out to dinner once in awhile? Well, hey! We could do that, too! Do you go to concerts? Or is it just too much hassle to maneuver through the traffic, pay for parking, fight the traffic on the way home; so much so that you figure it's just not really worth it?

Well, I lived about 6 blocks from our concert venue. I could walk there, if I wanted to. If I chose to drive, the parking was free. There wasn't a lot of entertainment options, so I saw a lot of acts that I wouldn't normally have seen. I can count on one hand the number of concerts I've been to, here in the "metro".

Do you go out to happy hour with your co-workers? Or is it just too far to drive? I drove 3 blocks to get to Paradiso. We all met up there. We had free appetizers, a bunch of laughs, and a short drive home.

How long does it take you to get to work? Do you take the freeway? It took me 10 minutes, maybe 15, if we'd had a snowstorm.

What did you do for fun as a teenager? Did you go to parties? Guess what; we had parties, too!

How's the job market? In my town, even someone like me (a rube with no education) managed to work my way up. I started out as a motel maid. I ended up being a manager of a department with 150 employees.

They were willing to give people a chance, because the talent pool was smaller. The experience and knowledge I gained in that small town enabled me to get a job here in the "big city", albeit for less pay.

How often do you visit friends? Do you choose your friends based on the suburb in which they live? Well, we all lived within 15 miles of one another, so we could intermingle at will. Going to someone's wedding dance didn't require making umpteen arrangements. We just went. It was basically 5 to 10 minutes to get home, after all.

When you're out and about, do you ever run into anyone you know? I could go to Kirkwood Mall at any time of the day or night, and always run into a familiar face.

Where do you shop? Target? Home Depot? Wal-Mart? Guess what! We had those, too!

Do you ever go out for a late-night breakfast, after your night on the town? How much does it cost you? Where do you go? Denny's? Perkins? We had a place called the Drumstick Cafe. It was off the beaten path. You got home-made meals there. I think the pancakes were something like 89 cents. Two people could stuff themselves for less than $5.00. Their hot turkey sandwiches, with mashed potatoes, were real turkey! You know, not that pre-fab sliced stuff, but actual turkey carved from an actual bird.

Do you worry about crime? I could walk around in the dead of night and never have to worry about my personal safety. We had a little neighborhood bar that was about 3 blocks from my house. It had a juke box and sometimes some karaoke stuff going on. We'd sit there and make fun of people, and have a few drinks, then walk home. I didn't worry about the number of drinks I'd had - I wasn't driving.

The Dakota Lounge had live acts. I saw some great bands there. One of them went on to get a major label recording contract. But I knew them first. The Dakota Lounge was a half-mile from my house.

And you know what? Everybody who lives in a small town isn't itching to get out. Get out to what?

Don't get me wrong. I love where I live. I actually have one or two people who I would actually consider "friends". But we don't socialize outside of work. One of them lives in St. Paul, the other one in Richfield. Sorry, it's just too far to drive.

I like my little neighborhood. I live here with my husband and my "kids". I drive to work and I drive home. A couple times a week, we stop at Holiday in the morning to fill the tank, and I get a nice cup of coffee. On the weekends, I sometimes go to Target or to PetSmart. They're close by. I don't go to malls. Too far; not worth the bother.

It's an insulated life, really. I think my world was larger when I lived in a small town. 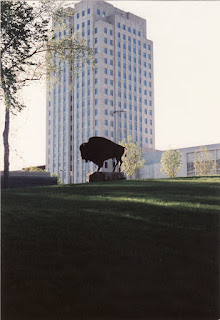 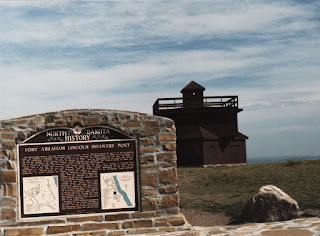 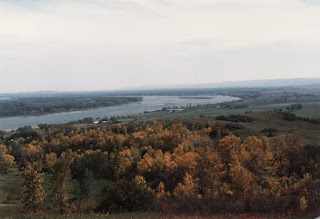