Vote for ME for President!

(A blast from the past, but oh so timely today):

Yes, that's right. After careful consideration, I have decided to run.

But, with the Republican National Convention starting here in my own little neighborhood next week, I'll admit, the patriotic fervor has overwhelmed me.

So, while campaigning will most likely seriously cut into my internet time, and my nap time, I've decided to make the sacrifice. There is a whole sh*t-load of people out there whose concerns aren't being heard. And I'm not talking about healthcare, the environment, blah, blah, blah - that boring stuff.

No, I'm talking about the concerns of regular patriotic Americans. Americans like me, my friends, who just want to go to work (if they have to) and be left alone. Those Americans who don't want to be hit up every other day to contribute to someone's going-away party or to their bridal shower or to some other worthless, meaningless occasion that they invented simply in order to get free gifts.

Americans who want to be free to drink beer and smoke, smoke, smoke their cigarettes, and not have some do-gooder telling them, "You know, you can get cancer from that"; yea, blah blah blah. To those people, I say, "Oh, go inhale your stupid Big Mac and your extra-large order of fries, and have your coronary. In the meantime, I'll just be here puffing away, enjoying life."

These, my friends, are the kinds of people who are unrepresented in this great land of ours.

Here is a news article, announcing my candidacy:

The three-term governess of her own stylish home in the western suburbs of Minnesota, Anderson has long been a leading proponent of four-hour work weeks and free cable TV and free internet for all citizens, except for those who are already making big bucks.

“It’s high time the citizens of this great country of ours have someone who understands them, someone who knows what it’s like to fight the rising costs of Miller Lite 12-packs and cartons of Merit Ultra Light Menthol 100’s,” Anderson pronounced. “Look at me; I used to live in a trailer. Do you think I have money? Think again.”

Anderson said that she has opened her campaign office today in the metro transit station on Cheshire Avenue. “I don’t know if that’s technically legal,” Anderson remarked to a reporter from the Weekly Shopper, “but if it’s not, then it should be. Do I look like I’ve got money to open a campaign headquarters?”

Campaigning under the banner of the Minnesota Loon Party, Anderson has already begun contacting likely voters. “I did a quick canvass of my neighborhood today, after I took my dog, Josie, out to ‘do her business’”, Anderson remarked. “Nobody seemed to be home at any of the houses I visited, but I think I did see some fluttering of drapes. It’s a start.”

Asked about her campaign platform, Anderson readily cited a laundry list of priorities.

“Number one, laundry. I’m sick of doing it. Do you know how boring it is folding pairs of socks into little balls? I think everyone should have free laundry service. Except for those who are already making big bucks. Let their butler do it.

“Next, I would say, free jars of salsa and those Tostito Scoops. It’s a lot easier eating salsa out of the jar when you have those “scoop” things.

Three, I guess I will go with paid holidays three times a month. There’s a lot of famous people who don’t have holidays yet. I think we could come up with a bunch. How about Happy Peter Frampton Day? Celebrate That Guy Who Does The Free Credit Report Dot Com Commercial Day? That’s just to name a few.”

“It wasn’t an easy decision to throw my hat into the ring”, Anderson said. “But if you have beliefs that you feel strongly about, it’s the patriotic thing to do. Plus, I could use the money.”

And here's a little news story about me, to demonstrate the seriousness of my campaign:


So, vote for me. If you're looking for "change" that really makes a difference in your life, look no further. 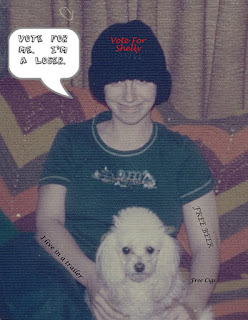