Again, like 1971, there was good and bad to be found at the old Ryman Auditorium in October of 1972.

In some ways, these posts are getting easier, because there are so many repeat winners, and I'm just not gonna fight the futile battle to find videos on YouTube that just aren't there. C'mon country fans! Somebody must have some old obscure videos of some of these folks!

But, on the plus side, we do find some new winners each year, so that makes it interesting (at least to me).

A strange thing happened with the Song of the Year category in 1972. The winner repeated from 1971. Now, I don't know how that's possible exactly. Aren't there cutoff dates for eligibility or something? I don't know what the other nominees were, but they couldn't have been so bad that the voters decided, ah, the hell with it, let's just go with last year's winner. I don't know. But kudos, I guess, to Freddie Hart, because he won again!

SONG OF THE YEAR

Here's the link again, in case you missed it the first time: Easy Lovin'

The INSTRUMENTAL GROUP OF THE YEAR was, again:

(Just a heads-up -- this goes on for a few more years). You know, I liked these guys, but I'm ready to move on already. Aren't you?

INSTRUMENTALIST OF THE YEAR

We have a new winner! Yay! Charlie was a very much in-demand session player in Nashville back in the day. I don't know how much harmonica gets put on country records anymore. Lord knows I don't listen to the radio, so how would I know? It could be rampant.

I am not a big harmonica fan. Hey, did you ever get one of those cheap 25-cent harmonicas at the five and dime when you were a kid? They were just worthless. They played about three notes, and it was hard to find a lot of three-note songs. Three Blind Mice is the only one that comes to mind, and that's really a boring song, and it probably has some sinister hidden meaning, going back to the late 1600's or whenever the hell the song was written. And here they were, marketing the song to kids. I hope kids nowadays aren't forced to listen to that macabre song.

Yes, I do digress sometimes. But I was just bored thinking about Charlie McCoy and his harmonica, although I'm not denigrating his talent at all! He was (is) very talented.

So, let's give a listen to the Orange Blossom Special. And I'll just alert you ahead of time, he will continue to win this award for a few years to come, and I'm not going to post any more harmonica videos in the future. Sorry, Bob Dylan.

So, now we come to Single of the Year. Remember I told you how much I HATE the song, "Honey"? Well, here's another hateful song. Again, I'm sure the woman is very nice, and I would love to have tea with her sometime, if she promised not to sing this song in my presence.

It's a funny thing about songs. Obviously, this was a major, major hit, and thus won the award for Single of the Year. So, a lot of people liked it. And I (generally) like three-quarter time songs, so what's my problem with it? Maybe it's because I left nursery rhymes behind when I was about, oh, five years old. I know (in hindsight) that she probably used those types of words to express her "exuberance" about being in love or something, but that still doesn't excuse the "I'll fix your lunch if you fix mine" line. What kind of Candyland world is this woman living in? I can barely muster the energy to fix my own lunch in the morning. Everybody else is on their own, as far as I'm concerned. So, as I said, she is no doubt a wonderful woman, and it's nothing personal. I just REALLY dislike this song.

SINGLE OF THE YEAR


P.S. I had a bridesmaid's dress in 1974 that looked a lot like the dress she's wearing.

MALE VOCALIST OF THE YEAR

There's not one iota of doubt in my mind that the song I'm posting here won the male vocalist award for Charley in 1972. That doesn't mean I have to like it. Perhaps I'm coming across as an old curmudgeon. I don't mean to. This song is nowhere near as hateful as Donna Fargo's song. It's just that it was done TO DEATH on the radio! And it wasn't that interesting to begin with! I mean, it's just verse - chorus - verse- chorus - chorus. Blah, blah, blah. I think Donna and Charley should get together and compare notes. He's kissin' his angel good morning and she's fixin' lunch for her zippity-do-dah guy. Gag me.

FEMALE VOCALIST OF THE YEAR

It's not often that I get to feature a video that has an introduction by Kermit the Frog, so hey! Unique!

I can never hear or watch a performance of this song without being reminded of the movie, Coal Miner's Daughter. I'm almost surprised to see someone other than Sissy Spacek singing it. I'm kidding, of course. I remember this song. I think I even had the album. In fact, I know I did.

1972 was Loretta's turn, so here's You're Lookin' At Country (backed by the Muppet Show Band):

ALBUM OF THE YEAR

Let Me Tell You About A Song - Merle Haggard

Now, there are no videos available of any songs from this album, but I will tell you, I had this album, and I now have it on CD, and it's worth buying! Merle actually did "tell us about a song" as an intro to each track. It was an early concept album (for country, at least). It's really quite good. I recommend the old Bob Wills song, "Bring It On Down To My House, Honey". I'd post it (not that I would know how to do that), but that would be copyright infringement, and I'm not of a mind to do that.

But here's a link to the CD (combined with the album, "Hag"; another one that I highly recommend):

Hag/Let Me Tell You About A Song 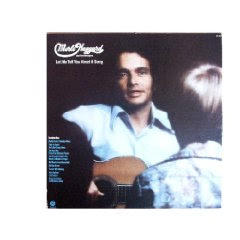 VOCAL DUO OF THE YEAR

Yes, sadly (for them), Porter & Dolly got shut out in 1972 for the vocal duo award. Well, time moves on. Not that it was a new generation or anything. It was basically their peers (or older) who took the mantle.

I'm sure Porter was hoping to win, and he probably spent hours in front of the mirror, getting his blonde bouffant just right for the big awards show. And picking out which upholstered sports coat he was going to wear. And Dolly was probably still in the dressing room when the nominees were announced, combing out one of her many frosted wigs.

Well, you know, these things happen. And Conway and Loretta, while certainly not my favorites as solo artists, did seem to meld quite nicely as a duet. And, if you think about it, they were kind of the anti-Porter-and-Dolly, looks-wise. They were both dark-haired, as opposed to bleached blonde. And they certainly dressed way worse (at least Loretta, with her patchwork quilt dresses). Anyway, I always really liked this one:

VOCAL GROUP OF THE YEAR

I'm not saying that all their songs were stellar. Cuz they really did have a lot of clunkers. That whole "back when I was in high school" bit got old after awhile.

But I even liked the Lester (Roadhog) Moran and his Cadillac Cowboys albums. And, before that, when they were featured players on the Johnny Cash Show. And when they recorded "Flowers On The Wall". The Statlers certainly earned their awards.

This song is from 1970, so a couple of years before they were voted vocal group of the year, but I think this is one of their best, and I'm sure the CMA voters were thinking about this song when they checked off the little box next to the Statlers' name in 1972.

I love Lew's high part at the end.

And now we get to the entertainer of the year category. Well, unlike real life, it really didn't take too long for a woman to win the top award. Let's see, the awards were first given out in 1967; this was 1972. I'm no math genius, but I'll guess that's roughly five years.

I really don't know what kind of entertainer this woman was (is). I did see her around 1964 at Panther Hall, but c'mon! I was, what, nine? I was too fixated on the whole atmosphere of Panther Hall, with the long, white-clothed tables, where people had to sit with a bunch of strangers to eat (interesting concept), and the fact that people were carrying around booze in a brown paper bag, to notice how well or not well the show was going. But I take the CMA voters at their word, and concede that she was (is) a pretty darn good entertainer.

I think, if you write a song like, "You Are My Sunshine", you can just sit back and say, "Okay! My work is done!"

Because who, as a child, didn't sing this song? And this guy wrote it!

We don't see videos of Stephen Foster, because obviously, video wasn't yet invented when ol' Stephen was writing his songs, like Camptown Races or Old Folks At Home. But, like those songs, "You Are My Sunshine" is a standard. One that kids all over the world are forced to sing in elementary school.

So simple, yet so annoyingly catchy. It's not rocket science, folks. You're singing it now in your head, aren't you? See? That's the mark of a standard.