We're countin' 'em down, folks! Gettin' nearer to the finish line (at least my finish line). At a certain point, this whole CMA awards retrospective will need to end for me, not because I've run out of years, but because I will have run out of patience (with country music, that is).

But that time is not now! In 1992, country music was still alive and kickin' (which is also the name of one of my favorite local bands from that time, Alive & Kickin' - wonder whatever happened to them).

First, of course, a bit of background on the year that was 1992.

In perusing the world events of that year, I find that war broke out in Yugoslavia, and there were some other unpronouncable countries in the news, such as Bosnia and Herzegovinia.

Closer to home, Ross Perot announced his candidacy for President of the United States. Watch it here:

In the world of movies, A League Of Their Own was a hit:

In pop music, and delving right into the CMA awards, I am thrilled to include probably the biggest hit of 1992; country or non-country.


Sure, it got sickening. But not "Friends In Low Places" sickening. And dang it, it's catchy and I LIKE it. If you watched CMT back then, like I did, you saw this video scores of times. And what better lyrics than, "you can tell my arms go back into the farm"? What?

The sad news, aside from Billy Ray's mullet, is that he has spawned some sort of freakazoid teen daughter, who has consumed the music business with her questionable "singing skills", but yet has ensured Billy Ray a very comfortable retirement, albeit at the expense of we, the listening public. But hey! Much like the line dancing of yore, we are adaptable! And we aren't actually forced to listen to her! So it's a win-win. I guess.

The MUSICIAN OF THE YEAR was once again Mark O'Connor. Yes, Mark had a good run (for a couple of years), but selfishly, I'm hoping that he doesn't continue to win, because frankly, the number of Mark O'Connor videos is severely limited.

But, for at least this time around, here's one, called, "Bowtie":


Watch more On the Mark videos on AOL Video

MUSIC VIDEO OF THE YEAR went to Alan Jackson (the fifth finger of the hand that was the nineties ~ I guess you have to read my previous posts to make sense of that).

I'm a sucker for those minor chords and, of course for anything relating to Hank Williams, so this song by the tall lanky Georgian is tops in my book.

SONG OF THE YEAR was this one, written by Vince Gill and Max D. Barnes (wonder what the "D" stands for, and why he feels that it's necessary to include it ~ but I'm just riffing because I already included this song in my last retrospective, and I don't really have anything more to say about this song, except that I'm a fan of it!

Here is, Look At Us:

Was this Vince's only award in 1992? No. It wasn't! Vince was also named MALE VOCALIST OF THE YEAR.

I'm ecstatic that I was able to find this beautiful live performance of Vince, singing, "I Still Believe In You":

Finally, FINALLY, I get to include one of my favorite country artists EVER, in the pantheon of CMA award winners.

The VOCAL EVENT OF THE YEAR was won in 1992 by Marty Stuart and Travis Tritt, for "this one", coincidentally called, "This One's Gonna Hurt You (For A Long Long Time)":


Seems that there was a new VOCAL DUO on the scene in 1992; a couple of guys named Ronnie and Kix. Wonder whatever happened to them.

In the great tradition of Billy Ray Cyrus, these two guys cornered the line dancing market in the 1990's. Yes, set foot inside any honky tonk at that time, and one would immediately be accosted by this song (not that that's a BAD thing). One of the greatest country voices, combined with one of the most enthusiastic duet partners, made for one class act; the act they call BROOKS & DUNN.


The VOCAL GROUP OF THE YEAR is one that I can definitely get on board with ~ Diamond Rio!

I actually had the opportunity to see the group in concert at a casino, and as I was eating my dinner, I noticed poor Gene ("mandolin") Johnson just trying to eat his steak dinner in peace, while numerous fans came up to his table to bother him. I thought, how rude. I was sitting at a table right behind him, and I wouldn't have even considered bothering the poor man. All he wanted to do was enjoy his baked potato. Poor guy. But the concert (later) was fantastic! Here's Mirror, Mirror:


It's so nice to see some fresh faces on the awards stage, for a refreshing change. And here's another.


I always liked Mary Chapin. Where did she go?? Oh, here she is. Still singing, still writing. Not incognito, per se; just not getting played on the radio anymore....but then again, who over age 30 is? Well, I, for one, am glad that Mary Chapin got her award in 1992 (and maybe even one in 1993 ~~ time will tell).

The HORIZON AWARD in 1992 was bestowed upon another great female vocalist, Suzy Bogguss. Yes, another "old" (a year younger than me) artist that radio threw away. I think Suzy had the last laugh, though. She took charge of her career, and by the sounds I heard on her website, she still sounds wonderful.

Here's a nice live performance from Suzy, of "Someday Soon":


This all leads us, of course, to the ENTERTAINER OF THE YEAR award.

No offense to Garth (and his hat), but I'm hoping (for my blogging purposes) that Garth doesn't win again for awhile. Because I am having a heck of a time finding Garth videos, and the ones I do find aren't really faves of mine (but that's just me....and my hat).

This single was actually released in 1990, but eh. I do what I can do.

Garth Brooks is/was a great artist, and a heck of a nice guy, and I know that I sound rather blase about him, but he just never was one of my idols. So shoot me.

Luckily for Frances (and through hard work, too, I'm sure), she went on to eventually become president and CEO of BMI. I'm guessing there was a pay raise, too.

Since I have no video of Frances, here's a picture: 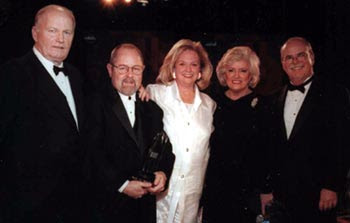 (Frances is second from the right).

It actually took until 1992 for George to get into the Hall of Fame?? The HOF is not known for its promptness.

Well, what's there to say about ol' George that hasn't already been said? Nothin'. So, let's just enjoy some videos, instead, okay? (and I purposely looked for some older performances).

Walk Through This World With Me

The Race Is On

She Thinks I Still Care

A Good Year For The Roses (with Alan Jackson)

He Stopped Loving Her Today

That's a pretty dang good career, Possum. In the interest of brevity (ha!), I left a lot of great ones out.

Congrats, George Jones, for your belated entry into the Country Music Hall of Fame.

So, 1992, in a (really huge) nutshell. We saw the yin and the yang of country music, from "Look At Us" to "Achy Breaky Heart". We saw big hats. We saw some classic singers that we won't ever hear again on the radio. We saw the Possum put most of them to shame.

All in all, a pretty good year.