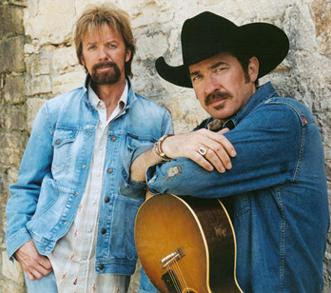 Yes, I know it's old news, but I haven't commented on it yet, so it's new to me!

What I mean is, my, how time flies!

Well, the duo leaped to the stage (or in Ronnie's case, sauntered) with a song called, Brand New Man, but their second single, to me, was far superior.

Here's Down To My Next Broken Heart:


My all-time favorite Brooks & Dunn song will always be this one. Unfortunately, apparently the duo never bothered to make a video of this beautiful song, sung SUPERBLY by Ronnie Dunn. Here's pictures with music for Neon Moon:

In later years, B&D's output became less prolific, but they still could spring some surprises. Here's a Spanish-tinged song, called, My Heart Is Lost To You:

The boys proved they still had some "kix" left in 'em in 2004, when they released this fine piece of songwriting by Kix Brooks, Red Dirt Road:

I saw Brooks & Dunn in concert a few years back. People say that they make a strange pair, but frankly, one without the other would make for a very dull, long night at the arena.

There is no doubt that Ronnie Dunn has one of the finest voices in country music - bar none. But there is also no doubt that Kix Brooks is a great songwriter.

More than than, Ronnie is probably one of the most, shall I say, lackadaisical performers ever to shuffle onto the stage, while Kix is a big ball of energy (and probably has to be, considering).

Time will tell what will become of solo acts Ronnie Dunn and Kix Brooks. They're ready to move on, okay. But I have my doubts.

I leave you with this. Watching this next video, we have to apologize to Billy Ray Cyrus. He didn't SINGLE-HANDEDLY create the line dancing craze. Oh no. If you ever stepped foot inside a honky tonk in the late eighties/early nineties, you had to carefully circumvent the annoying cache of lined-up middle age "cowgirls" who were self-consciously trying to remember all the right steps, so that they wouldn't break the chain, while they danced to:

So long, Brooks & Dunn. Please don't make your farewell tour one of those "cry-fests", like the Judds did.