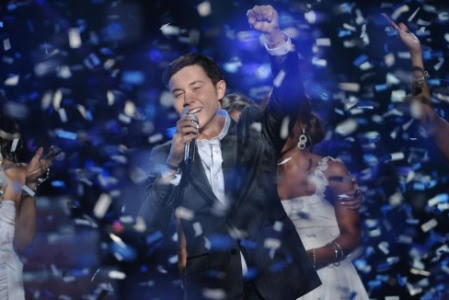 I used to watch American Idol. But after the debacle that was season nine (Lee who?), I decided that was it. Most boring season ever, and that's saying a lot, considering Taylor Hicks! But at least Taylor's season had Chris Daughtry.

So, this year, even with all the hype about the new judges (boring), I gave up on old AI. Sure, I still read about the show on Entertainment Weekly's website, but I really had no idea who anyone was.

About midway through the season, I thought I'd watch one installment, just to see for myself these people that I was reading about. That particular episode featured that little Scotty guy, singing, "I Cross My Heart". I thought he was pretty good, but didn't have a chance in heck of winning.

You see, whenever anyone on TV (or on radio, for that matter) calls an artist "country", they usually mean something like "Taylor Swift country", or "Rascal Flatts country". Not country country. This kid was country country. Who'd buy into that act, in this day and age?

Okay, I'm sure it didn't hurt that the kid is seventeen, and really, it's the teens and tweens that are doing all the voting on AI. And they don't really vote for the music, per se. They vote for whoever is "cute".

Regardless, I'll take that as a win. I think little Scotty is going to bring back something that's sorely missing from country music: COUNTRY MUSIC.

Plus, he's shopping for songs! All you country songwriters out there, dust off those lyrics that everybody told you were too corny; those chord progressions that everybody said were too old-fashioned. Yee-haw! A resurgence of real country music....maybe?

So, all in all, even though I didn't watch this season (always a day late and a dollar short, naturally), I'm thrilled by the outcome. And he's such a nice kid, they should have given him the title for that reason alone.

Now, to veer off topic just a bit, I did watch the American Idol finale. You see, I always like a big show. Like all AI finales, it had its good stuff, and its really bad stuff. This one also had some funny stuff, particularly (for me) the bit about which elimination was the most shocking. I also enjoyed every other thing that Casey Abrams was involved in. This kid has a future in the movies or TV. A natural entertainer.

My very favorite part of the finale, however, was the male contestants doing the following (and yay, Tom Jones!) Oh, for the days when entertainment was entertaining.

Here it is, in two segments, unfortunately (which kind of messes with the flow, but what can you do?)......