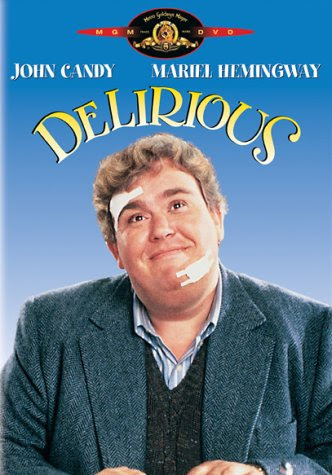 Songwriters are a delirious lot.

(By the way, thanks, John Candy, for the photo. I miss John Candy).

Why are songwriters delirious? Well, don't you have to be, to be a songwriter?

What prompted this post was me again, reading those songwriting forums (I'm a reader and a non-contributor).

On one of the boards, there's a whole big discussion about "expensive demos"; the pros and cons ("cons" being a good descriptive word).

Do Regular Joes really do this? I'm not talking about the successful Nashville songwriters, like the old standbys that are always mentioned: Jeffrey Steele, Craig Wiseman, etc. (like I'm supposed to know and/or care who they are). They can obviously afford to get those "good" demos done, because they're writing hit songs; you know, the ones that you'd hear on the radio, if the thought of turning on the radio didn't make you nauseous.

No, I'm talking about the everyday garden-variety songwriters, who spend so much time on songwriting boards that one wonders when they have the time to actually write a song.

Most of the songs I've taken the time to listen to, on these boards, are so-so at best (as would mine be, if I chose to share them, which I don't).

Who's got that kind of money to spend to get one of the "good", or even "non-good" demos made? I think they all must be wealthy retirees, since they're hanging around songwriting forums about 18 hours a day. So, maybe they do have the money.

I just think it's such a pipe dream.

First of all, the established songwriters have the "in" with the producers or artists or whoever the heck it is that makes decisions.

Why in the world would they even listen to Mr. Wealthy Retiree's song?

A related point: Those internet sites that are advertising "Looking for songs for Kenny Chesney" (or whomever)...what?? I think it's just a scheme. Why does Kenny Chesney's producer or record label (or whoever makes those decisions) need to troll the internet for songs? They've got people breaking down their door to hand them songs.

You know, it's the excitement of reading the opportunity, and thinking, "Hey, wouldn't it be great if I could get my song recorded by Successful Female Country Artist?"

It was only later, when I got my detailed critique, which stated, in its entirety, "not quite what we're looking for", that the realization hit me: Are you an idiot?? Successful Female Country Artist doesn't need my songs.

To be cynically honest, any piece of junk can be made to sound good, if one is willing to spend the money. Just listen to the radio, for pete's sake!

I'm just not into that game. Maybe if I was 20 (or 30) years younger. Maybe then I'd have the drive to write a song just like the ones that are played on the radio; just for that shot of possibly making some dough, and losing my self-respect (oops, did I say that?)

By the by, the consensus on that songwriting board is that, yes, you do need to spend the money. I'll have to check back to see if anyone bothers to mention that you're throwing your money away by doing so.

P.S. If anybody knows of a good songwriting forum, give me a holler. There are two that I view on a semi-regular basis, but they've both got their issues. One is a pat-on-the-back coffee klatch for any number of horrible to semi-horrible songs. The other is some kind of all-men's club, that features all manner of discussions regarding pretty much anything other than music. So, what I'm looking for is a board that is non-juvenile, and interesting.

P.P.S. Why is it that women so rarely become involved in discussions of the music industry, or basically of music in general, on these boards? Their contributions seem to consist of posting up their latest lyrics, and....I guess that's it. Am I the only female who's actually interested in the music biz? I can't believe that's the case. If it is, man, I'm sorely disappointed in my gender. Maybe they're all just too busy going shopping or something.

I leave you with the theme song of this post. As you may know, Prince is notoriously shy about sharing his videos, so here is a fan-generated one. (I like this song!)