Looking for a New Kind of Music 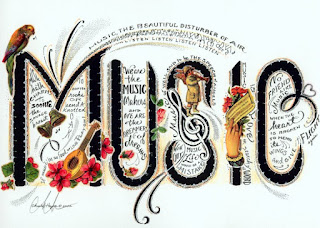 My husband is a CD collector. He has about three record stores he visits on a regular basis, looking for used CD's.

Today, I went with him, just to go with him, basically. I didn't even look at the CD's in the racks. I looked at some posters and some curios that the store had for sale. I glanced at the music biographies on the shelf (although I no longer buy physical books. I am on a mission to clear my life of clutter).

That's part of the reason I'm not interested in browsing the CD's for sale. I really don't want to buy any more physical CD's. My shelves are overflowing with CD's, when, in fact, all the music I want, I've already uploaded to my computer.

I make an exception for approximately four artists: Dwight Yoakam, George Strait, Mark Chesnutt, and Marty Stuart. Why? Well, with George, it's a matter of honor, really. I have every one of his CD's, and I don't want to break the chain. For Marty and Mark, the truth is, they don't sell music like they used to, sadly. I don't know why. Time marches on? Nobody wants good music anymore? Real country music is passe? Therefore, I buy their physical CD's to show that I, at least, still appreciate them.

With Dwight it's just that......well, it's DWIGHT. He possesses a couple of attributes that I subscribe to: GOOD MUSIC, HONEST MUSIC....Oh, and he never disappoints. I never have to weigh the options in the store (and by "store", I mean Amazon.) I never have to turn the CD over in my hand, checking out the names of the tracks, looking for the songwriters credits (most of which will be "Dwight Yoakam" anyway). "Hmmm, will this be worth my money? What if I don't like it? What if I only like two songs?" Those questions never factor in. I WILL like it.

My problem is, after those four artists (and to be frank, George Strait has been falling down on the job for a few years now), where do I go? Some artists are "good", but they can't seem to pick good songs. As for newer artists, well, I really just don't like the sound. I don't mean the singer, I don't mean the songs (okay, I guess I do mean the songs), but what I'm talking about is the sound of the recordings. That manufactured sound that comes out of Nashville these days.

To be frank (and this is not meant to be self-centered at all), I'd prefer to listen to Red River's music (except my own) than this artificially sweetened stuff that's playing on the radio, because at least I know that Red River's stuff is honest.

So, what I am really looking for is a new kind of music.

I've thought about it, and these are my requirements:

You know, they call it "music" for a reason. If it wasn't for music, it would just be dull poetry. Music should make your heart fly, or make your soul mourn. I grew up hearing the barbs about "maudlin country music". The crying steel guitar, and all that. Well, yea, I like a crying steel guitar! And twin fiddles? They get you right in the gut. That's why I just can't relate to the modern music listener. What are they getting out of this stuff? Seriously, I would truly like to know. I find nothing melodic about modern music. Do they just not really like music? Is it just some background noise to keep them from thinking about other things? I don't know, and I never will. I'll just chalk it up to a mystery that I can't solve.

But not that self-pitying crap. I hate that stuff. There's nothing worse than a whiny crybaby. It's not all about you, you know. There's a fine line between coming off as a spoiled brat and singing about something universal. How about singing about life, and the trials and tribulations that we all go through? You know, something relatable. I used to hear, "he's singing my song". I don't really hear that anymore.

No more paint-by-numbers arrangements. Throw in something unexpected. A cello there? Wow, never expected that, but it works! Listen to that guitar riff! So original! Everything, to me, now sounds dirge-like; even the up-tempo numbers. So boringly predictable.

4. Hit me with something I'm not expecting.

Way back, sometime in the nineties, my kids used to tease me every time I would turn this song up on the radio, or punch it in on the CD player. And I'll admit, I enjoyed driving them crazy with this song. Because they hated it. But you know, I really liked it. And the reason I liked it was because of the opening chorus:

Who ever sang a line like that? Nobody. I wasn't expecting it, and therefore, I liked it. It made my senses perk up and say, "Hey! What the heck? This is cool."

So, to sum up, what I'm looking for is an honest, melodic, surprising song.

Is that too much to ask? After all, I can't just listen to Ashokan Farewell exclusively.
at July 16, 2011