If I'm Going to Continue With this Songwriting Thing.... 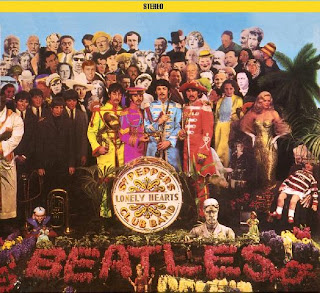 Actually, I just wanted to look at the pretty picture.

Sgt. Pepper is credited with being one of the very first concept albums.

It's also often cited in various polls as the best Beatles album. I disagree. In fact, it wouldn't rank very highly in my own personal poll. For the record, my personal favorites are Help!, Rubber Soul, and Revolver, in that order. Yes, I may be one of the few dorks who thinks that Help! is their best album, but well, that's just me, and that's how I roll.

But I digress from the title of this post, don't I?

If I'm going to continue with this songwriting thing ("thing" being a technical term), I would like to do a concept album (albeit, an album only in my mind, since I do not have the wherewithal to actually record an album by myself).

But let's just pretend that I was capable of recording an album.

If that were true, I'd like to write songs fitting a specific concept.

That, above all, would actually make songwriting interesting to me. Which, in the here and now, it is not.

It would be a challenge. It would be a goal for which I could strive. Goals are good. Without goals, everyone would just be mediocre, wouldn't they? Sort of like the real world (oops).

But since songwriting is not the real world; it's a fantasy world, this whole concept goal would be a good thing. It would keep me entertained. And lord knows, I would be nothing without my personal entertainment.

Help!, by the way, is a concept album. I don't care what anybody says. Maybe they didn't intend for it to be so, but that's how it sounded, at least to me.

So, that is the thought (the concept thing ~ I know I have veered off topic once again) that is currently rolling around in my mind.

Who knows? Not me! Something could come of it. I would be willing to give it a go. I already have the concept formulated; now all I have to do is execute it. That's the easy part (ha!)

If you've managed to read this far into my post, kudos! It's been kind of a personal rumination, but I thank you for following along.

In appreciation for your continued indulgence, I thought I would post some videos of the songs from my favorite concept album, Help!

A few sync problems here...Ringo's tambourine jingles before he even hits it...

You can have your Lady Madonnas and your Hey Judes and your Penny Lanes (although that's a pretty good one). I'll take the one above. 1965. It was a very good year. Apparently. I don't remember much of it, because I was only 10, but I do, absolutely, remember this album. This concept album.

P.S. "Help!" as a movie, was actually pretty silly. But I'm not here to judge movies. At least, not today.