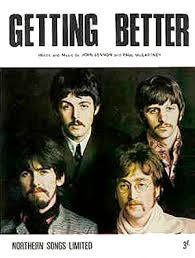 Yes, I am on a roll with the Beatles references lately, aren't I? I don't know why. It just happened to work out that way.

Nevertheless, the subject of improvement has been on my mind a bit.

Have you ever thought, I will never get better at this? (The "this" being anything, really). I know I have. In fact, I think that all the time.

I don't know why I think that, because past experience tells me that if I keep doing something, I will inevitably get better at it.

Unfortunately, that isn't true of everything. Some things, one actually needs to have a natural aptitude for. For example, I could keep doing math problems over and over (until I had to kill myself from utter boredom), and I am skeptical that I would ever get better at math. But maybe I would.

So, maybe it's a combination of natural aptitude and interest. Perhaps one can get better at anything, as long as it is interesting to them.

I think that's it.

I think maybe the brain shuts off when subjects or tasks are dull. In that case, I am a hopelessly lost cause at:

And, I'm sure, many more. But the rest are too boring to think about.

Then, of course, there is the secondary list. That is the one that contains items in which I am not interested, but for which disinterest is not an option.

And many more. (Yes, I am the quintessential homemaker.)

This secondary list is one that cuts me no slack. I have to do those things, so I might as well get better at them. Although how one gets better at folding laundry, I am unsure. Perhaps there are some "folding" videos I could watch on the internet.

If not "better", at least maybe "faster", so I could get them out of the way, and move on to something that is not as dull as dirt.

Maybe because I'm currently in a training mode, I have thought about this topic. I watch people who come to me knowing absolutely nothing, and I see a light bulb begin to illuminate rather quickly. That is gratifying to me because, they probably are not really that interested, and yet, something still starts to brighten for them. (My motto is, just talk and talk incessantly, and something is bound to catch hold, inevitably. If for no other reason than to just be rid of me once and for all).

But in the creative world in which I choose to live, I find that I have improved mightily in a couple or three areas:

1. Music videos (alias, "slideshows", since I have no video camera, and am thus limited).
2. Songwriting (Yes! I still do that from time to time).
3. Singing, to a degree.
4. Photography (although that is kind of a "feel" thing, so I just let that go wherever it wants to take me).

P.S. The thing about photography, I have found, is that you just need to snap away. You're going to end up with a lot of losers (photos, that is; not people), but you might find one or two gems. Take photos from unusual angles, experiment with lighting, don't be afraid to get in close; that kind of thing. Be creative.

Film is cheap (And yes, I do use film. I am the sole person keeping the film manufacturers in business. However, I don't really need or expect any kudos for that. One day, people will thank me. Just like people are now gravitating toward vinyl music. That same crappy format that we endured for decades, when you'd buy an LP or a single,and find that it was hopelessly warped, and you'd get queasy watching it spinning around on the turntable, but yet you endured it, because really, there were no other options. Or the record would skip, just as it was getting to your most favorite part of the song, and you'd have to put a little pressure on the needle, just enough to get past the "bad part", so the song could continue on its merry way. Of course, this disrupted your so-called "relaxing" evening, because you were constantly getting up and down to nurse the stupid stereo needle along its path. And yet...ahhhh, vinyl. They say.)

So, where was I exactly?

So, take heart. If you think you're never going to get better at something, the fact is, you actually will. Unless it's math.

I just finished reading the book, The Three of Us, by Georgette Jones (daughter of Tammy Wynette and George Jones).

The book was interesting (and a fast read), and, as I am wont to do, I today decided to look up YouTube videos relating to the subject.

As a preface, Georgette has, in the final chapter of the book, decided to embark on her own musical career. So, naturally, I was curious as to how Georgette sounds. Does she sound like Tammy? Does she phrase like George?

Well, the deal is this. EVERYBODY can improve.

Here's an early clip of Georgette singing. Quite unremarkable, to be charitable::

Nevertheless, one can improve. Compare that first video to this one:

And this, with her dad:

Notice the difference? I sure do.

So, you see, she improved.

I won't even get into the whole studio enhancement stuff. Sometimes, it's best not to even know about the "magic" that's done in the studio. The fact still remains that Georgette needs to be able to pull this stuff off live, and I'm assuming she does.