One Thing About Cats.... 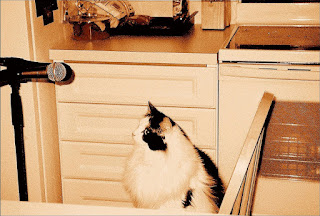 One big difference between dogs and cats is:

Did you ever notice that a cat won't get out of the way for you?

How many times have you heard of someone tripping over their dog? It's rare.

Luckily, my cat, Bob, is both black and white, so I can faintly see him in the dark; if I'm wide awake, that is.

Because a cat won't move out of the way. Tonight, as I was making my way downstairs to the kitchen, with the hall light off, I luckily noticed Bob lying at the top of the stairs. Or else I would have taken a nasty tumble.

Cats see no reason to move.

A cat is more, "What the hell? I was laying here! Excuse you! Can't a guy get any rest at the top of the stairs? Damn, I worked hard all day; coughing up those hairballs. And then I had to take a nap! And then another nap!"

I just don't think cats have ever been fully domesticated. Or else, they've been domesticated against their will. "Oh, yea? Domesticate me?? We'll see, won't we?"

"Let's get this straight: We do things my way around here. I'm not going to come crawling to you, just because you say, 'kitty kitty kitty'. F the 'kitty kitty' stuff. If I want to come see you, I will. And normally, it will be while you're sleeping. Hey, I keep my own hours. That dog of yours has no self-respect. You say, time for bed, and she's all, 'Okay! Whatever you say! I'll go to sleep now! I guess am tired after all!'"

"Little butt-kisser. While she's snoring away on your pillow, I've got stuff to do. I may curl up in the bathroom sink for awhile. Just because I can. I may investigate whatever you've got hidden away in that kitchen of yours. You know, knock some things off the counter; check them out. Get the snoring dog to jump down from the bed, to see what kind of goodies I've made available for her. Basically, get her in trouble. Ahhh, the good life."

"And is it my fault that you didn't get me de-clawed? So, stop bitching about, Ow! That hurts! When I'm showing you a little love, while you're trying to watch the TV news. I'm rather insulted by that!"

"And stop making fun of me, just because I run away whenever that damn doorbell rings. If you can't spot danger, that's your problem! I, at least, have common sense!" That's the kind of thing one learns in the jungle. Or, the kitty farm. Whatever you choose to call it."

"Another thing that really irks me is, if I want to talk to birds, I will! You make out like it's some kind of criminal offense, because I'm sitting on the window ledge, talking to birds. Let's just leave this between the birds and me, shall we? They get it; you don't. Don't concern yourself with things you don't understand."

"In conclusion, my main points of concern are these:

A cat is like a grouchy old man. He wants what he wants, when he wants it. Just give him a bowl of food, and leave him be.

Oh sure, I'm not saying cats aren't talented, when they want to be. Take a look at this:

Just don't ever ask them to play piano for you. They'll do it if and when they're damn good and ready.

It is very funny. I want to read it.
Thanks.