The Thing About Dogs.... 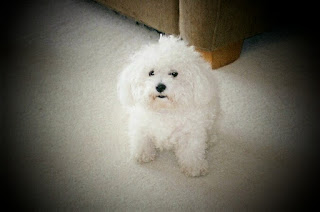 Because dogs will do things that try your patience.

Dogs have an agenda. And that agenda is FOOD. Seriously, I believe that's all they think about. You'd think they were little street urchins; starving and waif-like. You would never know that they eat a five-course meal every evening, and they won't even let you finish your bedtime snack, because those sad eyes are pleading with you. "PLEASE! I'M DYING HERE!"

Every day, as I take Josie for an innocent walk around the neighborhood, I have to be hyper-vigilant, because one never knows what kind of tasty (to her) morsel she might come across, and decide to eat....no questions asked.

I've caught her chomping on lord-knows-what, too late, unfortunately, to pry it out of her mouth. And honestly, I don't even want to know what. My theory has become, if it doesn't kill her within 10 seconds, it must not be that bad.

This whole OCD thing about eating has really gotten out of hand. I can't get out of bed on my day off and flip on the computer to read the latest news, without those beseeching eyes telling me that she's just going to DIE! if she doesn't get food...and NOW!

Is her stomach a bottomless pit? I mean, yes, I have my own issues with food, but I can at least go FIVE MINUTES without eating.

I want to say, hey, fix yourself a cup of coffee and light up a smoke. That'll ease your cravings, at least for a little while.

The other thing about dogs is, their incessant insistence on "guarding".

I'm not saying that's a bad thing, but it just goes to extremes.

You know, I give Josie credit for thinking that she can ward off any dangers; little sixteen-pound doggie that she is. That's real bravado! But I don't necessarily need protection, what with the security system and all.

She's free to relax; take it easy for a bit. Have a nap.

Yes, I am aware that she considers those Big Brown Trucks to be a threat to the neighborhood. But they've actually never done any harm, other than ringing the doorbell, which is akin to Original Sin, in a dog's eyes.

Speaking of which, are you ever innocently watching a sitcom, and someone on the show rings the doorbell? DON'T DO IT, I say! Because this sets off a frenzy in most dogs, culminating in a mad dash down the stairs, frantic barking, which goes on and on; then silence, as she surreptitiously awaits the fool (I pity the fool!) who tries to enter the house uninvited.

But given the option, they will always choose EATING.

If a burglar ever did find his way into our home, all he'd need is a little doggie treat morsel, and the coast would be clear! She'd be his friend for life, and would most likely help him gather up all the booty and pack it neatly into his trunk for him.

UNLESS, of course, there would be some undetectable SMELL somewhere in the vicinity. This will completely throw her off the task of loading ill-gotten contraband into the burglar's car, while the burglar impatiently taps his foot, waiting for the damn dog to STOP SNIFFING!

Sniffing, you see, is serious business for a dog. While you may think that your dog is just being overly fastidious, there is a higher purpose, one which a mere human cannot fathom.

Sniffing gives a dog the lay of the land, if you will. It tells her who's been around, what they were doing there, and what their business is.

Is this someone I want to get to know better? Well, let me smell them and see.

And I need to smell them for a GOOD LONG TIME. This is all scientific stuff. You don't need to bother yourself with it. I know what I'm doing. This is my job. It's technical.

Dogs have an inner life that you will never understand. Sure, you can group it into categories: Eating, Sniffing, and Guarding. But the minutia of their job is really unfathomable.

Just feel safe that your dog is on the job, ever ready.

Ever ready to sniff something, and, if you're really unlucky, to roll in it as well.

Email ThisBlogThis!Share to TwitterShare to FacebookShare to Pinterest
Labels: difference between dogs and cats, dogs, life