Glen Campbell ~ Ghost on the Canvas 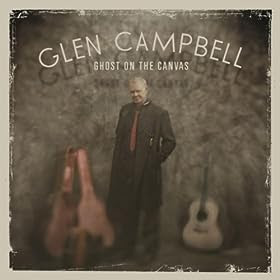 If one remembers back to the late nineteen sixties, the emergence of Glen Campbell as a superstar was not the most welcome news to hard-core country fans.

Most people were listening to Merle and Waylon, and maybe Charley Pride; when along came this syrupy heavily-string-laden stuff, that bore really no resemblance to country music at all. Sort of like today (without the strings).

One can look back now, with rose-colored glasses, and bemoan the loss of this so-called golden age of country music; this year of 1967. Poppycock. There were some great releases, no doubt. But the tide was beginning turn. Ray Price popped up with "Danny Boy". Eddy Arnold was in string heaven, with releases such as, "Misty Blue". Sonny James, who I admit, I never quite got, was still hitting the charts. That creepy song, "Ode to Billy Joe" was huge. I like a song with an obscure meaning as much as the next guy, but was there actually a point to this song? He could have been throwing anything off that bridge. For all I know, it was an Eddy Arnold album. Which would explain a lot (no offense, Eddy, rest your soul).

So, amidst Branded Man, I Don't Wanna Play House, and Pop a Top, along came By The Time I Get To Phoenix. That song sounded dated even when it was current. I know that Jimmy Webb wrote the bible for songwriters, but I absolutely hated that song. And I still do. Maybe the song was okay, but the production.....Maybe if the producer had stuck a beat on the thing, it wouldn't have induced me into a coma.

Glen has always been a consummate musician. He was part of the Wrecking Crew, for God's sake. I don't think it was his fault. I just think that whoever was producing him (and I'm not looking it up) carried too much clout, and Glen carried little to none. I'm guessing the producer cut his teeth on Mantovani albums.

Glen did better with Gentle on My Mind, the song with two thousand verses and no chorus. But I liked it. A John Hartford song. And a John Hartford banjo.

And he had perhaps the best track of his career with Wichita Lineman (yes, Jimmy Webb did better this time around).

And then Glen had some lost years, which is neither here nor there. In 1975 (what is it about years that have "7" in them?), he had a huge hit with Rhinestone Cowboy. You like that one? Really? I realize Larry Weiss (and yea, I did have to look that up) has had a bunch of cuts, and I have had zero, but life isn't really fair, now, is it?

So, I've had a like/hate relationship with Glen Campbell's music for about what......44 years?? What?? No way am I that old!

But when I read that he'd been diagnosed with Alzheimer's, it made me very sad. My dad had Alzheimer's. It's a cruel, heartless disease.

Then, later, I read that he was embarking on one last tour. Good idea? I don't know ~ time will tell, I guess.

Finally, I found that he had recorded an album. His last. "Ghost on the Canvas". I was naturally curious. I clicked on some samples on Amazon, and I really liked what I heard. Really liked.

So, I downloaded the CD today. I actually went out to purchase the CD, but alas. I wasn't about to drive all over town today, so I went to my neighborhood Target store, in the futile hope that they would be carrying it. Ha! I did see some offerings by people named Dierks and Billy (oh, probably a bunch of Billys), and Trace and Chance and Community Chest. However, I didn't pass "GO", since there were no Glen Campbell CD's in the "C" section. (And I'm sure that Trace and Billy(s) have all made stellar CD's, ones that will stand the test of time, if the test of time is approximately three minutes long).

Call me old (fashioned), but when there is a CD I really want, I like to own it in physical form. I'm thinking, believe it or not, that if I can find the CD anywhere, I still might buy it!

Because this is: THE BEST ALBUM OF THE YEAR.

It might be just me, but I always viewed Glen Campbell as sort of flip. When he was strutting onstage, doing Rhinestone Cowboy, I thought, he doesn't really believe in this song. It's a joke to him. (And to us.)

When he was weighted down with heavy strings on those early songs, I thought, well, he's finally got a career going, so he's going to pretend like the songs actually mean something to him.

This album, I will just say it now, made me cry.

There are no pauses between tracks. It's as if Glen had important things to say, and he had to say them in a hurry.

And he wrote or co-wrote the majority of the tracks.

Be forewarned. This is not a CD to play when you're looking for some light, fluffy entertainment.

Glen is not flip.

My favorite track was written by Robert Pollard, called, "Hold On Hope" (and I do know ~ now ~ that this was previously recorded by another artist, but it is so appropriate here):

Dear friend of mine, the weather's fine
Today I saw some ruins of the Roman world's decline
And I climbed all those Spanish steps, you've heard of them no doubt
But Rome has lost its glory, I don't know what it's about

Dear one at home, i just flew in from Rome
And Paris is a postcard all decked in color chrome
And so I climbed the Eiffel Tower and prayed at Notre Dame
But I just can't find the romance and I wonder why I came

I don't know what to say, other than, buy this CD.

I don't know if I will want to cheer....or cry......when this is named album of the year. A little of both, I guess. Deliriously happy, but sad.

Here are some clips of Glen singing, and then talking about Ghost on the Canvas

Hi Red River, Very much enjoyed your comments on Glen Campbell's album. I share your lack of enthusiasm for Glen's brand of country-pop back in the day.

I'm interested in listening to some of your songs when I get the chance..I did that singer-songwriter recording back about a decade ago....Looks like you're doing well with it....take care, tr

Thanks for reading my review...I enjoyed your comments on your blog...lots of fun to read! Jimmy Webb deserves a bit of revisionist critique here and there....that song about the cake and the rain!uhhggg!