More Bad Hits of the Seventies 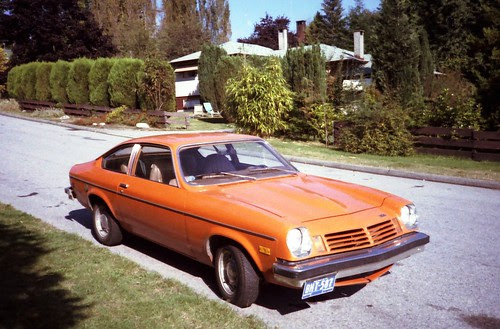 Ahhh, the nineteen seventies. A time of Richard Nixon and Jimmy "The Peanut" Carter.

The time of Ford Pintos that exploded, and, on the somewhat safer side, Chevy Vegas. Not "Vegas", as in "Las Vegas". No, I mean "Chevy Vega". Yes, I had one. I didn't even remember what it looked like, until I found this picture. All I remembered was the orange.

Orange was a HUGE color in the seventies. Orange shag carpets, orange fiberglass draperies. Oh, we had it all. Orange, and GREEN. Those two colors just screamed alchemy.

I think the reason for the orange and green color combo was that the sixties were so BEIGE. Sure, you think of the sixties, and you think "flower power", and paisley mini-skirts and ties (for the really "hip" corporate executive), and Peter Max's psychedelic posters. But in the decorating world, one was not allowed to stray beyond beige.

So, of course, the seventies did a 180, and went with the most outlandish color palette imaginable. And we thought it was chic!

"Did you get a dress for the Christmas party?"

"It's a really saturated orange, with touches of green."

And then, for the guys, not to be outdone, we had the leisure suits. When one wanted to straddle the divide between suits and sleepwear. That crisp polyester.

In order to complete the leisure suit look, a guy, even a "guy's guy" had to venture into Woolworth's and find himself a gold chain. Nothing too ostentatious. No charms or lockets attached, or anything "girly". The girly part was accomplished by his heavily-sprayed and blow-dried coiffe.

Visible chest hair, of course, was mandatory. In fact, guys would get out on that disco floor and compare chest hair coverage. Even those who were bare-chested would glue some faux hair on their torsos, just so they wouldn't be ridiculed by the other boogaloo-ers.

I'm not going to quibble about the fact that Tony just grabbed some random audience members out of the pack and called them "Dawn". Where's Telma Hopkins? I bet she's pissed.

And I don't know exactly what this is, but it's either the worst Christian high school prom ever, or all the guys in attendance are stoned. It's really hard to judge.

But here's Tony (and "Dawn") in his leisure suit, singing "Tie A Yellow Ribbon". And frankly, this song is so monotonous that I'd like to tie a yellow ribbon around his neck, and squeeze hard.

And what better sums up what the seventies were than this song by something called the "Unlimited Orchestra"?

I was trying to figure out where Barry White came in, and then I realized that he's conducting this thing.

Don't tell me that doesn't remind you of this:

Remember this from the seventies? Those organ/muted guitar riffs that start the song?

Sure, I know what you're thinking. You're thinking Swiffer Wet Jet. Well, that's what happens to obscure semi-hit songs. They become the soundtrack for cleaning product commercials in the next century. I'm guessing Player, or whoever wrote that song for Player, isn't crying too many tears.

You know, the Native Americans suffered many atrocities. If you know anything about American history, you are well aware of this.

I don't presume to speak for the Native Americans, but I'm thinking that in the lore of their oral history, they reserve a special place for Paul Revere & The Raiders.

From the Swatch-watch wearing "Paul Revere", to Mark Lindsay's hair, there are so many things wrong with this video. But on the plus side, the drummer seems to be heavily featured, so he's down with that.

I will mention that Freddy Weller is ashamedly part of this group. But he did go on to bigger and better things, thankfully.

I don't know about you, but I really miss the three-cornered hats and the revolutionary war tab-coats. But I suppose progress can't be denied.

I'm sort of a fan of falsetto singing. From Roy Orbison, when he went into his high register, to even the Eagles sometimes.

However, much like I hate Lou Christie, I hate this performance by Leo Sayer. And what, by the way, ever happened to Leo Sayer?

And, I know it's stating the obvious, but I'm thinking all those sexy backup dancers probably didn't even ring a bell with Leo. But at least he felt like dancing. That's the main thing.

In conclusion, there are so many avenues to explore in this world we call "the seventies". It's an alien world. But as much as we try to pretend it never happened, the evidence is here ("YouTube") for all of us to see.

I really, truly, blocked most of it out. I think that's a human defense mechanism.

But I say, embrace it! It can't be denied.

And, musical historian that I am, it is incumbent on me to remind everyone of a time that we would much sooner forget.