The Summer of Love Redux 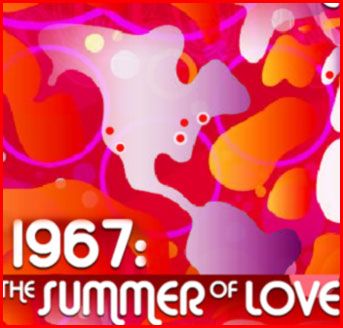 It's rare that one particular year in music can produce so many classic songs. 1967 did that.

I never really gave 1967 a whole lotta thought, in the annals of popular music, but you know, one year tended to waft into another, especially in the sixties, if you get my drift. And by "get my drift", I mean, "trying to sound way hipper than I obviously was, since I was only twelve years old".

That said, I DO remember popular music from those years, especially given that the AM radio was playing all manner of popular music then; not just one tiny isolated genre. How else does one explain the intermingling of Bobby Gentry, the Rolling Stones, and, say, Frank and Nancy Sinatra? We heard it all, and we liked most of it.

I sat in the back seat of our Ford Galaxie, and the it didn't really matter which station the radio was tuned to. All of the stations played everything. And my dad didn't even make one derogatory comment about any of the songs. He actually didn't make any comment, and neither did my mom, so I was left, there in the back seat with my toddler siblings, to make up my own mind about the music.

I vaguely remember walking along, alone, singing that song out loud. Why? Well, it's got everything a mere adolescent would enjoy...the melody was sing-songy. The words were easy to remember, because they tended to repeat a lot. Folk music was meant to be that way. It was perfect for folks to gather at the hootenanny, and, I guess, commune. Hootenanny. You never hear that word anymore. We should bring it back, just because it's fun to say.

A note: I try really hard to find actual performances of the songs from the period in which they were hits. This was the best quality video I could find, but you will note that Stevie is not actually singing in this video. A concept video, perhaps? Or just lazy editing? Don't know.

I also would be ignoring the obvious if I didn't mention that this video completely reminds me of Eddie Murphy doing Stevie Wonder.

Anyway, it's a better song that Georgy Girl, but taste is all relative, I guess.

Fine; so much for original performances. I have failed with this next song, and it really makes me mad, because this is one of my very favorite songs, and I don't even like the Association. To be honest, most of their songs grate on my nerves (especially "Windy" - see #5. And who names their kid "Windy"? I think that's just asking for trouble.)

But I love this song, and the only decent video I could find is from, I think, 1983, but still:

Number twenty-nine is, again, by the Supremes, who, if you ask me, were kind of chart hogs in 1967. And for the most part, their 1967 songs weren't even very good. But that's what happens once you make a name for yourself. Anybody will buy anything.

This is another song that makes me clench my teeth, but that's just me. I mean no disrespect. I like a lot of Supremes songs; just (especially) not this one.

Here they are (in silver lame this time - I appreciate that they at least change up their wardrobe colors) with Reflections:

1967 was the year that Frankie Valli ditched those damn Four Seasons for once and for all. The hell with those guys! I was getting tired of singing falsetto all the time anyway, said imaginary Frankie. That stuff is hard when you're my age!

This is one of those songs that one will always remember. I'm not sure why, but my guess is because of the Bacharach/David-type arrangement. Unfortunately, that also dates it. Takes one back to the days of Dionne Warwick asking how to get to San Jose. But that doesn't make it a bad song. It's actually a "not bad" song.

#31 is by Arthur Conley. Who? Yea, I know. I wonder if Arthur ever did anything besides this one. If not, fine by me. This is a good song. I could look him up, but I've got more songs to get to, and so little time.

Number thirty-two's video is obviously not a 1967 performance. I mean, you know Aaron Neville. You probably thought that all he did was country duets with Linda Ronstadt. Obviously not.

Another voice I love; Aaron Neville. Tell It Like It Is (obviously with help from that guy who was married to Cher, and from Bonnie and her guitar):

If you know the Monkees (and who doesn't?), you know that they never did actual performances. That's because they never actually played on their own songs (well, sure, maybe the maracas). Micky Dolenz will be the first to tell you that.

So, their songs are all "performance pieces", which is another term for "cheesy situation comedy skits" that all the cool kids (and the nerdy kids - raise your hands!) watched on Tuesday nights (was it Tuesdays?) on NBC.

You probably don't know Bobby Vee, unless you're my age. Bobby Vee (nee Bobby Velline) was born in Fargo, North Dakota (my home state!), and he has a storied musical history. (See anything about the Day The Music Died, except of course the actual songs about that, which I hate, hate, hate).

I'm not going to recount Bobby Vee's career here, but I will say, it's nice nowadays that artists are allowed to use their real names, because "Vee" is stupid.

But Robert Velline had some really nice songs. No, not Rubber Ball, but others. I saw him once in person; some kind of bar gig; and he was a really good, professional entertainer. Which I'm sure he still is, by the way.

Number thirty-four on the 1967 charts is Come Back When You Grow Up (and no, there is no video ~ fine. Whatever.)

I hate to end this post on a down note, but I must be true to the charts.

Let me preface this video by saying I really hate those "acting" songs. You know, the overly dramatic renditions; the bad Laurence Olivier auditions. They remind me of smoking jackets and cigarette holders and those Laura Petrie flip hairdo's.

I like "retro" as much as the next person, but this is just a little too strange for even me.

This song has no redeeming virtues, but somebody must have liked it. A lot of people, apparently. Even more than Johnny Rivers and the Turtles? It must have been the geezer vote.

Amazingly, we are through number thirty-five, and we still haven't gotten to some of my favorite songs from 1967. And the ones that are left are way more memorable than some of these others.

It was quite a year, and you'll be surprised at what rounds out the top fifty from the summer of love.
at February 03, 2012