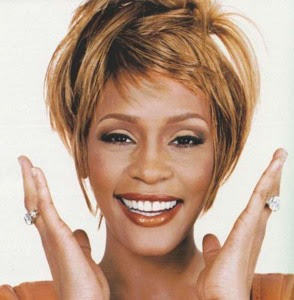 I'm obviously not a famous person, nor will I ever be. I don't think that's necessarily a bad thing.

I've been thinking about it a lot this past week, and kind of getting angry.

It seems that what fame does is destroy fragile souls.

Face it, artists are fragile to begin with. At least most of them. It's that sensitivity that allows them to tap into the feelings, wants, fears of the world at large.

It's a double-edged sword, to quote an over-used cliche.

But even not-so-sensitive people fall prey to the dishonesty that comes with fame.

You know, the hangers-on; the ones who really don't give a damn about you, but they'll say, "Yes, Ma'am", "You bet, Sir", just to keep getting their palms greased. They're no fools.

I read some stories in the past week, where people who interacted with Whitney in her last days said, "Oh, she was FINE! No, there was no strange behavior! Are you kidding? She was great ~ in high spirits; fully in control."

I saw the pictures. If those people think she was "fine", they must live in a nether world that the rest of us simpletons can't seem to view through our naive haze of reality.

Fine. Protect her reputation. It's a little late now, though.

How about one of those morons taking her aside and asking, "Are you okay? Is there anything I can do to help you? I'm worried about you".

But it's not just Whitney. It was Michael. It was Amy. It was Elvis.

They were all "just fine". Okay.

"Are you sure you should be mixing those pills with alcohol, Whitney?" Did anyone ask that?

Elvis had his own "mafia" around him. Hand-picked. "Hey, Big E! TCB! Got another Cadillac you'd like me to take of your hands?" I wonder if they feel really good about themselves.

"So, Mr. Jackson, you want me to smuggle some Propofol out of the hospital and shoot it through your veins? I see absolutely no problem with that!", says Dr. Murray. "By the way, when can I expect my next paycheck?"

"Amy, you are looking GOOD! Have you put on a few pounds? You look so healthy!"

Did any, just ONE, person around these artists ever deign to tell them the truth? I doubt it.

They surrounded themselves with sycophants.

Of course, it's ultimately the responsibility of the person themselves to get it together.

So used to everyone bowing and scraping that they take advantage of it? Expect it?

It seems like Elvis was that way. Seems to me that he banished anyone who would dare speak some truth. How dare they? Don't they know who I am? THEY don't think. I do the thinking around here. And it's all about me. Nobody else. ME. I am the star. I am, in fact, the king of the world! Everyone tells me I am. So, I am.

"All my fans really love me."

Well, here's the thing: unless you're some kind of shallow, celebrity-obsessed cyborg, you do not actually LOVE an artist.

What you love is, the memories they have created for you.

It's really NOT about them; it's about you.

Honestly. Think about the songs that flash in your mind. The ones that, to you, are classics. Why are they classics to you? Because they were the soundtrack of YOUR life. A special time. These songs were the BACKGROUND for your movie.

They flatter themselves too much. If it wasn't them, in particular, it would have been someone else. That's just the way it is.

I do love some of Whitney's songs. They take me back to a time in my life. I remember turning the radio on, waltzing around, cleaning house, singing along off-key. It was a happy time for me. My kids were young; life seemed so open and bright.

I love some of Michael Jackson's songs, and mostly, his performances of them. It was the time of MTV videos. My kids were of an age when they were starting to get into music. I loved watching their interest in music begin to take root.

I admired Amy Winehouse's artistry. I liked that she was kind of a throwback to an earlier time. I remember my husband and I listening to her CD together. I remember the closeness we felt as we shared that time.

I admit, I am a bit lost about Elvis. You see, he was before my time, really. I was always sort of critical of his recordings, because I found them to be over-produced and his voice too bombastic.

Yet, I do remember as a kid, playing the 45 of "Return To Sender" and singing along. Honestly, at that age, I thought he was singing, "Return to Cinda" ~ a variation of Cindy? So, hearing that song takes me back to the upstairs of the farmhouse, and me dropping the needle on the turntable, and pretending I was the one on stage singing. Again, a time in my life.

It was only years later, when I heard some of his Sun recordings, that I began to appreciate Elvis more. In the time that he was around, in my memory bank, in the seventies, I remember seeing footage of middle-aged women throwing their underwear at him, and me wondering, what the hell? He was doing a parody of himself, I thought. "Hunka hunka burnin' love"? You could hear the background singers way more than you could actually hear Elvis.

To me, he was completely delusional. Doing those karate stances. Wearing the big chains and the big sunglasses. Those vacant, drug-addled eyes. I thought he was a joke, but he was the only one who wasn't in on it.

But then, I would hear, "Can't Help Falling In Love", where he actually practiced some modulation, that I thought, well, he really CAN sing.

It's a self-centeredness that, I suppose, is human nature. Maybe I'd like to have a servant, too. But would I? I think it would begin to feel like a sort of prison. Always being hovered over. No time to myself. Losing myself.

I think these guys were lost.

And while I'm on the subject, I'm going to say this: These entertainment magazines, and these tabloids, just love, LOVE, this kind of story. It's one last way to exploit these people. One last way to extract a buck from them. Sure we read this stuff, so maybe we're exploiting them, too. Maybe the whole world just feeds off the sad stories of their lives. It completes the circle. In one flash of time, we dance joyously to their music, and in the next flash, we gossip in hushed tones about their downfall.

It just seems to me that the price of fame is too high.

I thought about this, and I decided that I would end this post with the way they were. The way WE remember them. The soundtrack of OUR lives. Thank you for the memories. Regardless of how it turned out in the end, we won't, can't, forget your music.