A Jolt of Reality? 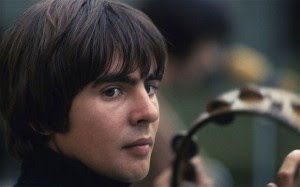 My husband was searching the online guide for shows to record, for us to watch later.  On PBS, there was an upcoming show called, "60's Pop, Rock & Soul", hosted by Davy Jones.  Since we both were mourning the recent loss of a childhood icon, he decided to record the show.

The preview stated that the show would include performances by such luminaries as Davy (of course), Peter Noone, Mitch Ryder, Paul Revere and the Raiders, and many more.  I was sort of excited about it, because I love nothing more than reliving those halcyon days, when rock 'n roll was young, and so was I.

The other night, we clicked it on.

Well, let me tell you, the first thing that jarred me was the audience.  What the heck?  There was a whole slew of old people, bopping away in their seats, looking rather desperate in their quest to be relevant; hip; groovy?  The couple dancing in the aisle, doing the frug, for God's sake, was a dead giveaway.

My first thought was, why are all these old people in the audience?  How can they even know these songs?  Weren't they they ones who were swooning to some group called, the Crewcuts, doing something like "Sha-Boom"?

And sadly, it dawned on me...I'm one of those old people!  When and how did this happen?

I can't really be like that, can I?  Naww.  I can still walk upright.  I am still "up" with the latest entertainment news, although I'm sort of flummoxed by some of the stuff that seems to be really big right now...like, why are people so enamored by vampires?  Is that like Bela Lugosi, who I watched on a nineteen-inch black and white TV when I was young enough to be frightened out of my mind, and afraid to go to bed at night, and my big brother tormented me that the monster was going to stalk me and kill me?  And he laughed about it with his friends, while my pulse was racing at 200 BPM?  Those vampires?

And why is music now so depressing?  I remember pop music being all airy and bouncy.  La la la, walkin' down the street so fancy free....

But I'm still with it.  Right?  I don't actually have grey hair; well, for the most part.

The show reminded me of when my husband and I bought tickets to see the Moody Blues in concert last year.  We got to the theater, and there were all these elderly people, acting strangely animated.  Completely embarrassing themselves in their zeal and apparent devotion to this group.  Sure, I like Tuesday Afternoon, but it wasn't the Beatles, for God's sake.

And speaking of the Beatles, yea (yea yea), when I saw Paul McCartney in concert, I guess I was like one of those aged silver-tressed ladies, for all intents and purposes; swooning, when he sang, "All My Loving", and I kept repeating in my head, "I am seeing a Beatle!"

See, I don't see myself that way.  Old, I mean.  Didn't the sixties happen just the other day?  Seems like it.

But reality bites (as the movie title states ~ although I don't think I actually saw that movie).

As the performers came on stage to do their numbers, I felt bad.

Bad, first of all, because the oblivious people in the audience either didn't know or didn't care that most of these folks were not the original artists!  Call me crazy, but I still have most of my faculties, and I know who was in which band, and don't try to call yourself Jefferson Starship if Grace Slick isn't there, and you've got some twenty-something lead singer doing Grace's vocals, and really?  Did Grace somehow learn to stop time?  And if so, can she share her secret with me?

And don't call yourself Paul Revere and the Raiders if Mark Lindsay isn't there to sing the lead vocals.  That's just BS.  I don't care if eighty-year-old "Paul" is faux-playing the keyboards.

And, pardon me, but the Miracles are not the Miracles without Smokey Robinson.  And Roger McGuinn did a fine job singing, "Mr. Tambourine Man", but the Generation X'ers who were doing background vocals were definitely not the Byrds.

The other, more disturbing aspect of the show was the actual "real" artists themselves.  I think I choose to remember them as they were.  Peter Noone not withstanding, because, if you recall, he was recording hit songs when he was 16 years old, so he still looks rather spry, in comparison to the others.

But the Vogues, for example?  I don't really want to see them limping on stage with their walkers and canes.  I saw the Vogues in concert sometime in the seventies, and they were quite vibrant.

PAUL REVERE AND THE RAIDERS (Oh, and with MARK LINDSAY):


MITCH RYDER AND THE DETROIT WHEELS:

GARY LEWIS & THE PLAYBOYS (in this case, Gary, NOT looking like an 85-year-old version of his dad):

Remember ? MARK AND THE MSYTERIANS? (and really, you don't have to say "? Mark", because "?" is a question mark, so basically, it reads as "Question Mark Mark and the Mysterians"):

Like it or loath it, this is the real Jefferson Starship Airplane, with the real Grace Slick:

I can't help but find this amusing, and I am somewhat surprised that I found a video of this, because basically a group surreptitiously called, "The Kingsmen" could have been anybody, really.  This was a garage band song.  And, I might add, a song that no one really knows the lyrics to.  It's one of those songs that you can just sing, "Louie Lou-I", and then add whatever words you want.  Because nobody will know whether you're singing the actual lyrics or not.  No one knows what the actual words are.  I think it's a mythological song.  I think it has a deeper meaning.  And archeologists will one day find out what it all means, but we'll all be dead by then, so what do we care?

THE VENTURES also appeared on the show.  Or, should I say, "Venture"?  There was one guy, playing guitar (I don't even want to ask what happened to the other Ventures).  But this guy ~ this "Venture" ~ did the Hawaii Five-O song.  Do I remember this?  Ahh, yes.  Hawaii Five-O ranked right up there with Mannix and Medical Center (starring Chad Everett), and they were all, I believe, on CBS.  CBS had a great run, there, in the late nineteen sixties.  I didn't even like the show, Hawaii Five-O.  I think the only thing I liked was, "Book 'em, Danno" and Jack Lord's hair, but I watched the show religiously.  Maybe I watched it for the theme song.

PETER NOONE (without his Hermits) made one more appearance on the show, luckily (for me) doing my very favorite Herman's Hermits song; "There's A Kind of Hush".  I want to say it was 1967 when this song was released.  I do remember sneaking into my brother's room, when he was away, to sing along with this song, as I played it on his portable stereo system.  Ahhh, the good old, sneaky days:

CHAD & JEREMY (Who remembers them?  Raise your hand!)  I think they appeared on an episode of the Dick Van Dyke Show.  It was either them, or Peter & Gordon.  I always get those two confused.  It's that whole "&" thing.  But in actuality, this was the best performance of the PBS Rock 'n Whatever special; "Summer Breeze":

And, of course, THE BYRDS.  On this particular show, it was just Roger McGuinn with some nondescript background singers, but, as you know, David Crosby was part of the Byrds, as was Chris Hillman, who nobody ever gives credit to, but who was the leader of the Desert Rose Band, which, in my parlance, is rather important, because it was a COUNTRY band.

Lastly, of course, there was Davy.  I was sad, watching the opening number of this PBS show, because, you know, Davy is gone (and I wrote a whole long post about my memories of Davy).

Apparently, I am a silver-haired old lady, because Davy Jones had an indescribable impact on my formative years, and, you know, that was approximately 46 years ago (almost a century), but it feels like, literally, yesterday.

But there he was, on that PBS show, doing that side-dancing (I guess you'd call it); sort of a vaudeville-like ~ sixties hybrid dancing.  But we got it.  We thought it was cool.

So, in conclusion, I am apparently now old, and the bands aren't what they used to be.  And Paul Revere should really find a nice retirement village with his wife, and settle in.

And the music of the sixties really was better.