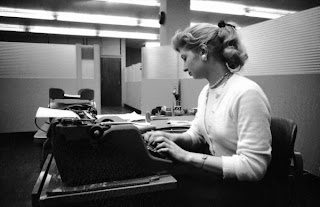 There were times, in my younger years, when I would leave a job because something upset me.  With the wisdom of my years, I don't do that anymore.  Because, if I was going to leave a job every time I got upset, I'd be looking for a new job every week.  Sometimes one just has to deal.

In 1988, I left the hospital that I'd worked at for eight years.  I do remember why.  I had gotten into a verbal disagreement with one of the nurses, because she felt I had given her too many patients, which was possibly true, but what was I supposed to do with them?  Stack them up in the hallway?  Sometimes things got impossibly busy.  That's just the way it was.  But I was upset, because I liked this nurse, and it felt to me like our friendship was now on the rocks, plus I felt rather demeaned, and I thought, who needs this?

So, I went looking for another job.  In the little city in which I lived, jobs weren't a dime a dozen.  The want ads for clerical jobs maybe took up two inches in the local newspaper.  Strike that; one inch.

But one of those ads spelled success for me, and that's how I became a secretary.

Sure, they don't call them secretaries anymore.  But we all know what they are.

I'd always been more of a "clerk", which does have a distinction from a "secretary".  At least, as a clerk, I had a very specific scope of duties, and I didn't have to bring anybody coffee.

I'm not a feminist, but I always bristled at being somebody's slave.  It's a power trip for the boss to make you bring him/her coffee.  "Would you like me to shine your shoes, too?"

My job as a "farm secretary" (yes) did actually sometimes involve bringing my boss coffee, and my boss was a "she".  I mean, seriously, are you that busy, that you can't stand up and walk over to the coffeemaker and pour yourself a cup?  My boss today would be mortified if someone delivered a cup of coffee to her, aside from the fact that she doesn't drink coffee.  But she's more of my generation.  Women who became high-powered executives in 1989 were so heady with the realization, they took advantage of it.  They were probably getting revenge for all the years they had been the ones to bring the coffee.  But that's still no excuse.

My job as a secretary paid $6.00 an hour, and for that princely sum, I got to work sometimes Saturdays and Sundays, during tax season, and trudge to the post office on my own gas, to mail out tax returns.

I also had to learn to use the stupid dictaphone, and my boss was from Oklahoma, so she had a weird hybrid accent, which rendered me completely stumped sometimes, as I was trying to decipher what the hell she was saying on tape.  So, I generally just made up something for the words I couldn't understand.

I had a typewriter, a dictaphone, a telephone, and a straight shot from the front door, so I was a receptionist, too.  Oh, and I had a copy machine.  I stood at that damn copy machine for hours at a time, running off multiple copies of everybody's tax returns - one for the client, one for the files, one for the IRS.  Lather, rinse, repeat.

I won't say I hated the job, but I liked it rather minimally.

We also were, apparently in our tiny department, big on "togetherness".  There was a little waiting area right in front of my desk; you know the type - like you find in the clinic; a loveseat and a table with a lamp and some out-of-date magazines.  Well, at lunch time, all four or five of us (depending on the season) had to sit in that little area and have our lunches together.  That was so sweet!  I am embarrassed to say this, but I actually took up smoking again, just so I could leave the office at lunch time and drive around, aimlessly, to avoid the forced jocularity.

But on the days that I was stuck there, I got to smile and nod as my boss rambled on about her Stephen King obsession, relating every nuance of the latest King novel that she was reading.  Needless to say, I've never read a Stephen King book, because there was no need, once I'd heard the oral recitation.

She, as well, was beaming over the knowledge that her (tiny little) staff loved her, when, in fact, we all hated her.  And we talked about her endlessly when she was out of the office on one of her "travel" days.

Ahhh, travel days.  All the muscles in my body relaxed then.  I could turn up my FM radio, and just do my little chores, and I didn't have to wonder when I'd next hear the muffled Southern drawl from the office nearby, summoning me to come in for whatever whim good old Nancy had on her computer-enhanced brain.

In hindsight, I guess good ol' Nancy was kind of socially awkward, but why was that supposed to be my problem?  I noticed it in her tentative handshakes when greeting clients.  The fumbling for just the right platitudes to mouth.  She tried too hard.  I am a really shy person, but I had no problem talking to the old farmers who stopped in.  I just went with the flow (that's my motto for life, by the way ~ just go with the flow).

The straw that broke the camel's back was Nancy's two-week vacation (to Oklahoma, no doubt).  I busted my ass printing out gloms of data on every tax client that the company had, on my own initiative.  Getting everybody's files all neat and shiny.  Getting all that good data there for future needs.

And when she came back from her exotic Oklahoma vacation, all she said, when someone told her, was, "Well, I should think she would have done that!".

So, when another, better opportunity (a 25-cent increase in salary!) came along, I went for it, and I got it, and that's how I ended up in the insurance biz (22 years now).

When I broke the news to good ol' Nancy, I told her I was leaving because of the better prospects, and she lamented the fact that the company just couldn't afford to pay me more.

I really, really wanted to tell Nancy that I was leaving because I despised her.  And that I despised her because she'd treated me like her lap dog.  Except a lap dog occasionally at least got a bone.

I've never since been a secretary.  I've always been a "specialist", which means, leave me alone and just let me do my job.  Thank you.

I don't envy secretaries.  I hope they have it better now.  And I think they do, especially since they're now called "executive assistants".  I think that name change was just a ploy to get a better pay scale ~ hey, more power to them!

Musically, 1989 was kind of a schizophrenic year for me.  I had one foot in rock and a toe dipping into the waters of country music.  The days when I was allowed to listen to FM radio at work, I listened to Bob Beck on Y93.  Bob Beck was a cool disc jockey.  He was funny.

Bob played this song a lot in 1989.  It's kinda how I would choose to remember my days as a farm records secretary:

I randomly ran across you and enjoyed reading your work memories. :)

Thank you, Deborah! It's fun to think back and remember.