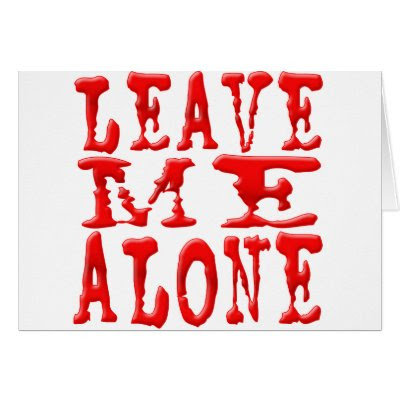 Ever try to get a group of people to do something together?  It's not like herding cats.  It's like herding lamps.  They just sit there.  And some of them are missing their bulbs.

That's what forced togetherness does, though.  It causes people to rebel.  I can sometimes relate to that.

I bet those people who attended PTA meetings just loved, loved breaking off into little groups and planning school carnivals and white elephant sales.  Laura Petrie probably did that, when she wasn't dancing around her living room in capri pants, generally being a pain-in-the-ass show-off to all of Rob's work buddies.

But Laura only had to see those people about once a month; not every day.

The rest of the time, she was mostly home by herself, vacuuming (in her capri pants), squeezing oranges into juice, and shooing away the occasional door-to-door salesman.

And she never got bored.  People today get bored.  That's why they like to whine that nothing exciting ever happens.  But just try taking it upon yourself to create some excitement. And asking them to get involved.  They suddenly avert their eyes, and become silently engrossed in the tasks that they, five minutes ago, were looking for any opportunity to ditch.

You don't even have to be asking for a supreme sacrifice from them.  You aren't asking them to make anything, or shell out money.  You're asking them to basically carry something from their homes; something they were longing to be rid of in the first place; and dump it into a communal dumping spot.  That's it!  Something that would benefit them and others.

"I really should do that; yes."

I call it subliminal rebellion.  People do not want to commit to a "relationship".  Yes, they know you're there; and they're there.  They don't necessarily want to be there, nor do they want to be there with you.  So, if they just pretend that neither of you is there, they can cling to the fantasy of actually being Laura Petrie, at home; alone.  Dancing.  In capri pants.

And they'll pick their own friends, thank you.

Their reasons for giving up are thus:

A)  People ignore their request.
B)  People say they will contribute, but they never do.
C)  People complain about the entire idea.
D)  People whine that it somehow isn't fair...to them, so why do they have to contribute?

E)  Nobody asked for my input.

Those who whine about not getting a chance to offer "input" are those who would never, ever take it upon themselves to do anything.  But they love, LOVE giving input.  I think they used to call it kibitzing:


1. To look on and offer unwanted, usually meddlesome advice to others.
2. To chat; converse.
I've had my own failed experiments with trying to involve people in a common goal.  I still do it sometimes, because I have to, but I expect nothing, really.

Advice, though, to those of you who wonder why we do it, and who are just feeling pestered and annoyed:  All we're trying to do is, alleviate some of the drudgery.

You know, you're not our first pick of people to hang out with, either.  And we don't want to be your best friend; really.

But we're stuck with each other.

I'd really love to just be dancing:

I say "dance". Hmmm, isn't there a song about that? I hope you dance!
People who are not the herders are sometimes afraid to take a position and therefore sit, stuck, unable to move at all in fear of offending someone - or being thought of as less.
One of the few nice things about aging is learning to ignore the fear, and learning to "do it anyway."
Com'n on..... dance!

I totally agree, Marla. I've been on both sides of the aisle, so I can understand that fear. But I love your note about aging, and I'm on board with that. Yup, dance!