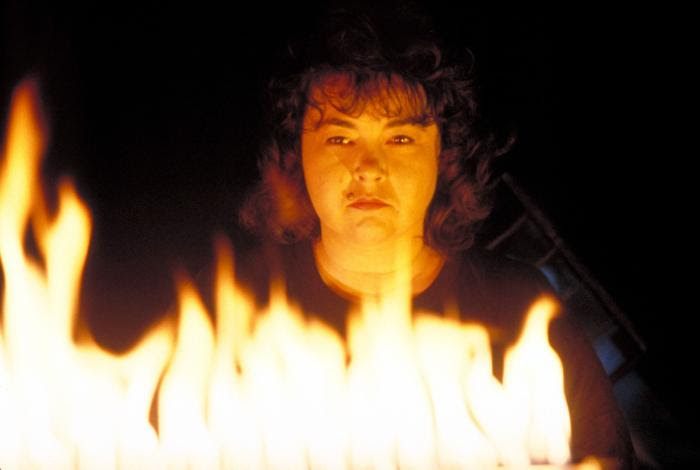 Being the highly successful (and the stats proved it) supervisor that I had become, I was looking forward eagerly to my first performance review.

My unit had kicked everybody's ass, and we had a good time while doing it.  At Christmastime, somebody somewhere in the office had suggested a decorating contest, and one of my people thought it would be fun to wrap our cubicle walls in Christmas wrap, with bows and the whole bit.  It looked pretty.

My first inkling of things to come should have been the rap on my clear glass cubicle wall from the evil assistant formerly assistant manager (now the actual manager), CONNIE, announcing to me that the the branch VP considered our decorations tacky and unprofessional.  (Really, hasn't everybody done that bit by now in every office everywhere in the world?  It's become such a cliche that our little area rejects the idea every time it comes up.)

With the wisdom of hindsight, I realize that the VP never said that; the evil manager, CONNIE, did, and she was too cowardly to claim ownership of her own bitchiness.

Regardless, we had to tear it all down.

The problem was that all the other supervisors, except one (my friend and mentor) didn't bring caramel rolls for their staff.  This one-upsmanship made them feel sad and inferior.

And they apparently complained about it, too.  How it made them look like fools.  Because they were too selfish and self-centered to think about their own people, and how dare I shine a spotlight on that!

But I didn't know all this at the time.  I found out about it at my performance review.

You see, CONNIE (I like to use all caps, to accentuate her own sense of self-importance) was the insecure type who loved (loved!) having people fawn over her.  And there were certainly enough kiss-asses in the office who were eager to do it!  We had our lunchroom, in which all the supes were expected to congregate around Connie every day at twelve noon, and tell her how pretty her hair was, and how, no, she didn't look like she'd gained weight!  Not at all!  And how smart she was; such a dynamic decision-maker!  I, admittedly, have always had a hell of a time faking things.  To my detriment.

Nevertheless, when that fateful September day rolled around, I was oblivious to the blindsiding that was coming.  My review began innocuously enough.  Connie recited my unit's stats, and mumbled something about them.  I had to strain my ears, but I think she gave me props for my unit's achievements.  Although it's all become sort of jumbled in my mind, in light of what was yet to come.

Then, after the formalities were over, Connie leaned back in her chair, behind her obscenely oversized oak desk, and gave me the real what's-what.

"You are trying to make all the other supervisors look bad."

"You're trying to show everybody up."

"You don't stop in and say goodnight to me when you leave at the end of the day."

"If you can't become part of my team, I will replace the team."

This, folks, is what one gets for contributing to the success of a company.

Here's the scoop, kids.  You can be the biggest screw-up on the face of the earth.  You can have absolutely no skills; no intelligence.  You can be semi-literate.  You don't even need to be able to walk upright.  All you need to do is kiss ass.

I didn't kiss ass.  And I was threatened with being fired.  For doing a hell of a good job.

I cried.  I cried during my review.  I didn't want to!  I couldn't control it.

She wouldn't even offer me a Kleenex.

Connie was cold, and she was evil.  But I wasn't stupid.

After a sleepless night, I determined to stop into her stupid office every stupid day at 5:00, and say, "Goodnight, Connie!  Have a nice night!"

I needed that job.

I toned down any sort of motivational perks for my staff (okay, I just kept them on the down-low ~ I still did them).

I praised to the high heavens the stupid, incompetent other supervisors that I had the supreme misfortune of having to work with.

I downplayed my group's superior stats, but my unit knew.  They were sort of my co-conspirators in the whole operation.  They knew how good they were, but they knew they couldn't say how good they were.  Not out loud.

I also did one more thing.  I created my own new mantra:

Karma is a bitch.