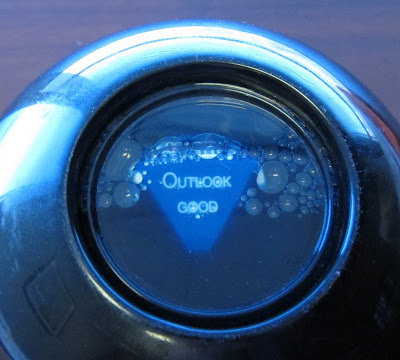 My mom and dad used to host card parties sometimes.  I'm not exactly sure how many times, because all I have to go on are some hazy memories and some black and white photos that I purloined from my mom's photo albums.

I remember that the parties were always held on a Saturday night.  My folks only hung out with people they were related to.  It's not that they were snobs, or clannish.  But those were the people they interacted with on a day-to-day basis.  My dad and his brother were in the farming biz together, so it was only natural that they had a close bond.  Thus my mom and my dad's brother's wife were friends, because what choice was there, really?  No, no.  They actually were friends.  My aunt was sort of an adventurous type, for her weight, which was enormous.  Many a dark moonlit night, she'd throw the car seat as far back as it would go, in order to fit behind the steering wheel of her 1952 black Ford sedan.  And off she'd go, burning up the back-country roads, with my mom on the passenger side, and us waifs sitting in the back.  My mom loved Aunt Barbara's free-spiritedness.

But sometimes, on a Saturday night, my mom and dad would invite everybody over to play cards ("everybody" being, brothers, nieces, nephews, in-laws; but only the cool ones.  The snooty ones were never invited, because they were wet blankets, and who needed them?  They could just sit home on their party lines and gossip about how decadent their relatives were, and how they were disowning them; yes, disowning).

My mom would set up card tables in the living room (or, as I told you before, "front room"; that's what we called it, perhaps because it was in the front of the house.  That seems quite logical, really.)

My mom, my little brother, Jay, and me ~ in the "front room".  I was the ugliest child ever.

Soon, all the guests would arrive and go upstairs to throw their coats on my bed.  Around the time that watching the excitement became just too much for me to handle (i.e., I was sleepy), I would trundle up the stairs and fall asleep beneath the overcoats.

I'm not sure if it was the card games, which consisted of Smear and.....well, that's it.....or the drinks that people enjoyed more.  I do know that we never had pop in our house (yes, we called it "pop") unless it was 7-UP or Squirt (or, as the grownups called it, "mix").  And the only time we ever got to drink pop was when we secretly snatched some "mix" from the fridge when the grownups weren't watching.

At one of those parties, around age 3 to 5, I'm estimating, my parents cajoled me (which didn't take a whole lot of persuasion) to get up in front of the group of guests and do my singing and dancing routine.  I shudder to think about that now.  If my kid did that, I would be eternally embarrassed, which is probably why, to this day, the only advice I ever remember from my mom is, "Don't embarrass me".  But, at the time, my mom and dad were beaming, as if to say, "Look at our little idiot savant!  Isn't she 'special'?"

(And to this day, I try to always keep a low profile.)

Unfortunately, along with the card-playing guests came their children (my cousins).  I say "unfortunately", because I was rather discerning regarding who I chose to spend my time with, at age, oh, five to ten-ish.

My best friend (if I knew what that meant) at the time was Aunt Barbara's daughter, Karen, who I spent a lot of time with; because of the whole proximity thing.  The rest of them, well, I could take them or leave them.  And frankly, I mostly left them....to their own devices.

But, as children do, because they love to pick special allies, Karen and I would wander off on our own, on those nights. 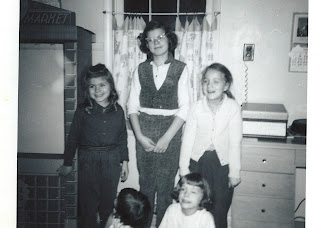 Various cousins & me (Karen is standing on the right; I'm kneeling in front of her).

I, or she, had one of those magic eight-balls.  You remember those!

And we got into the biggest argument that we ever had, over what "outlook good" meant.  She, for some reason, thought "outlook good" actually meant "bad".  I don't know if her interpretation was "overlook" good, or what exactly.  I was thinking the other day that if I could somehow find her on the internet and contact her, I would ask her if she still thinks that "outlook good" means something bad.

I kept arguing with her, telling her that "outlook good" meant "good", but she was so adamant about it that I began to doubt myself.

Funny how the strangest, most inconsequential things stay with you.  Today, if somebody says, "outlook good", I think, oh, Karen said that was bad!

Bottom line, I was not only an idiot savant, I also was way smarter than Karen, even though she was a better singer and she had sky-blue eyes, while mine were a nondescript muddy brownish-green color.

Those card parties, too, hosted a whole ton of smoking.  Everybody smoked.  Well, not my mom.  Most of the women didn't.  But the men would be shuffling those cards with cigarettes dangling out of their mouths, smoke wafting out of their nostrils.  Yea, yea, smoking is bad, but I remember my dad smoking, and it makes me feel closer to him, remembering that.

Of course, my baby brother was asleep in his crib in the adjacent bedroom, but it appears that the prodigious smoking had no lasting ill effects on him, since he, like Karen, has those sky-blue eyes, and a clear complexion.

The next morning, there would be Sunday mass that we were compelled to attend, although my mom was pretty good about herding us out of the church at communion time.  It's not that she was a heretic; she was just practical.  Get out of the parking lot before everybody else exits the church, and we'll be on our way home; home to a roast beef dinner (never really liked roast beef; still don't, but still...)

My big brother sitting at one end of the table; my dad at the other.  My baby brother in his high chair, my mom getting up and down to bring more dishes to the table.  Me, there in the middle (I've always been in the middle).  Ice cream for dessert.

My folks never exhibited any signs of a hangover from those Saturday night card parties.

We obsess too much nowadays about everything being in its place.  Compartmentalize everything.  We don't actually have too much fun.

I thought I would consult the Magic 8-Ball about the meaning of life.