Computer Tip From Me 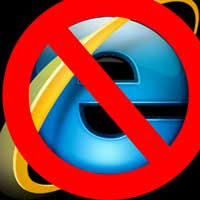 DO NOT use Internet Explorer!

I've been making some cosmetic changes to this blog, so as I was working in one browser, I wanted to take a look to see how things were coming.  So, I opened up IE.  OMG, it is so dreadfully slow!  What the hell is wrong with Microsoft?  They were once on the cutting edge, or maybe they were just the only game in town.  I can't remember which.

Have they just given up completely?

I did recently, by the way, upgrade to the latest version of IE, so there should be no problem in that regard.

As a test, I also tried viewing some of my posts that contain embedded YouTube videos.  As you know, I make prodigious use of music videos here, and I have noticed, on some of my older posts, that the videos have subsequently been removed from YouTube, and thus, I just look like an utter fool, pointing you toward a ghost video.

I checked out one of my newer posts on IE, and thought, really?  They've removed these videos already?  Well, they hadn't.  It was just that Explorer was falsely showing me a blank white square on the page.

I can't speak for other browsers, but I use Firefox.  And don't just take it from me.  Here is a portion of an article I found tonight:

Most people who switch to Firefox notice a significant speed boost right away. Once you get used to pages popping right up you may get frustrated when forced to use Internet Explorer even for short amounts of time.

So, if you're still clinging to the dark ages of Microsoft IE, make the switch!  You will not regret it.