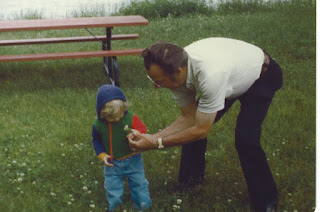 It's hard to have a Father's Day without a father.

If my dad was still alive, he'd be 85 years old. And he'd still be as exasperating and silly as he always was.

The stuff that makes me me, I got mostly from my dad.

One of my earliest memories of my dad is sitting and watching him shave. He had that old-fashioned straight razor, and he'd be looking in the mirror and singing one of the latest tunes he'd heard on the radio. "Catch A Falling Star" was a favorite. I sat there like a star-struck fan, just watching my dad shave.......and sing.

My dad was always singing......or whistling. He was a great whistler.

In my early years, my dad was a farmer. He worked really hard, from before sunup to after sundown. But he'd always drive the tractor into the yard at lunchtime, so I'd be waiting in the yard by the house; waiting for him to drive in. And I'd run out to meet him. He'd scoop me up in his arms and carry me to the kitchen.

My dad had six kids, but in so many ways, I think I am the one most like him.

My dad was the eternal optimist. Even in light of hard evidence to the contrary, he always believed that things would work out okay. Or he just figured that it wasn't worth worrying about. That's me.

He lived for small pleasures. He found endless humor in the absurd. Problem was, if he found something funny, he just wouldn't let it go. And it would leave the rest of us scratching our heads, because we didn't quite "get" what was so funny.

Remember that commercial about the Roach Motel? "Roaches check in, but they don't check out"? For some reason, he just found that to be hilarious. And he'd endlessly quote it. I could postulate that it was because, after many years of farming, my mom and dad went into business by buying a motel, so maybe that was the connection. But I still don't really get why that was so funny.

But we'd all laugh, just because it was funny that he was laughing about it. Humor in the absurd.

By no means was life a bowl of cherries for my dad. First of all, he worked really hard. There wasn't much money in the early days, and my folks got by on credit, until the harvest came in.

So, he really appreciated the small moments. Picnics in the backyard; a can of Grain Belt. A pack of Belairs in his pocket.

And then there was the inherited disease. Alcoholism. It kind of ran rampant in my dad's family, and my dad was not immune.

It didn't really get bad until the late sixties. Leaving the farm and going into business was perhaps a financial boon, but not an emotional one. Left to his own devices (and unfortunately running a bar as part of the motel complex), my dad didn't want to make his patrons feel lonely, so he'd pour himself a tall glass of whatever they were having.

As one can imagine, one thing led to another, and life got bad. Lots of drama; lots of heartache.

Finally, in 1976, my dad owned up. He knew what he had to do, and although he was sort of led, kicking and screaming, he entered treatment for the third time and got his life back.

For the rest of his life, he never took another drink. And life was still good. He still laughed about stupid stuff. He still got tickled by things that the rest of us didn't get.

My mom and dad sold the business and retired at a relatively young age. My dad took up gardening (a flash to the farming years). He complained about the rabbits eating his lettuce.

He'd been in a car accident (with a Model T? or a Model A? One of those models) just before he'd gotten married. His hearing was permanently damaged, so we all dealt with his mishearing, misunderstanding stuff all through the years, but it got progressively worse as time went on. He wore hearing aids, but they didn't help a whole lot.

The thing was, if he misheard something, he'd just make up something else. He'd come up with the most absurd interpretations of what someone had said; one just knew that he was messing with us.

"Richard, do you want more coffee?"

It was like Emily Latella, and just as calculated.

When Alzheimer's settled over him like a soft blanket, he'd still sit in his recliner late at night, but now he'd carry on conversations with his imaginary friend, long after my mom had gone to bed for the night.

We came to visit and stayed overnight in the spare bedroom, and as I lay in bed, I could hear him talking in the living room. I fell asleep that night to the sound of my dad's voice. It felt gentle; soothing. Just like I was a little girl again.

After my dad passed away, I sat in my rocking chair on the weekends and played Ray Price over and over. It made me happy, because I felt that Dad was there with me, and telling me, in his gentle, soothing voice; "It's all right".