He was taking over the biz, and he was lost.  He had to hire people, first of all, and heaven forbid!  How do I do that?  Seriously, Philip?  Well, you've asked the right person!  I've hired one hundred and fifty people, so I kind of have a handle on the whole hiring aspect of your job.  Lucky for you!

Well, first, Philip, you probably want to have a test of some sort.  A "keying test" would be a good starting point.  Because your new department will be all about proficiency and accuracy.  Believe me, Philip, it will be advantageous for you to hire people who possess those attributes, if you actually need me to tell you that.

Oh, hold on a minute, Philip.  I see by my caller ID that Peter is calling.  Can you hold the phone?

What's that you say, Peter?  You need somebody, preferably me, to travel on down to Arlington, Texas to show Philip what's what?  Hey, no problemo!  I've got nothing, really, to do with my time.  I'm just marking off days on my calendar, after all.  Waiting for that September 30th (or "drop dead date") to roll around.

I'll take Coreen with me.  You, Peter, being the young single man that you are, have a hankering for Coreen (although, to be frank, she's too good for you), so I know you'll be all on board with Coreen flying down to TX with me.  Besides, Coreen has worked hard, and she's proven herself, and she deserves a working vacation; you know, before she has to find herself another occupation; thanks to you and your spanking new boss.

So, we'll just jet on down there and help Philip out.

Besides, my sister and her family live in Fort Worth, so I can have a nice family visit, and do a little remedial education for you, all on the company's dime.  Win win!

So, Coreen and I booked our flight to DFW, and once we landed, rented a car and meandered our way over the TX freeways to our La Quinta Suites in Arlington.

We showed up at the Arlington office in the sweltering, perspiring heat, and schooled Philip in the ways of IKFI.

Meanwhile, back in Bismarck, some unfortunate soul, Laurel, no doubt, had to field the daily calls from Pat in Allentown, who, once again, just didn't understand.

Coreen and I sat with Philip in his sparkly new conference room, and explained to him everything that he would need to do to make a go of his new division.  And I sat beside him at his workstation and showed him how to monitor stats, and what to do when his different queues became overloaded with work, and how to disperse the work, and how to determine who could handle it.  Whew!  Crash course in patently obvious supervision.  And they called us rubes.

And then Coreen and I flew home.

Meanwhile, back at the ranch, everything was chugging along as things tended to chug.  Michael, another of my up-and-comers, had fully blossomed, and had gone from a temp employee to someone who was directing others in their daily tasks.  I was proud of Michael.

There at home, however, things were in flux.

Everyone was worried about where they would go from here.  Would they have a job with the company?  Would they need to shine up their resumes and apply for non-existent jobs elsewhere?

Why did they have to take "tests" to be considered for internal positions?  Nobody else had to take a test.  Well, that was the nature of IKFI.  We were always considered the delinquent stepchildren of Acme Insurance Company, and we remained that way still.

Little by little, people starting breaking off from the group.  Laurel got an internal position, so we baked her a cake, and presented her with a "Grease" tee shirt as a going-away gift.  And everybody cried a little.

We did a lot of crying in the months between May and September, as we kept having to say goodbye.  And we ate a lot of cake.

As the end of September loomed upon us, some of the group decided that we needed to have a going-away party. A big blowout.  Let's go out with a bang; not a whimper.

Jokes began to be made about selling off the used office equipment.  We determined that our going-away party would be a "going out of business sale".  And, thus, a party theme was born.

Meanwhile, one warm night in July, my supes and I decided it was time to treat ourselves.  We hired a limo to take us to the local casino, and I worked things out with Peter, since two of my supervisors were in charge of the second shift, and dang!  They wouldn't be able to be at work that night!  Donna, another indispensable member of our team who never got a promotion like she should have, agreed to fill in for the supervisors that night.

We had the limo pull into the Acme parking lot, and there we all piled in, with our bottles of libations and our meager wads of cash for gambling.  And we kept fiddling around with the radio, finding just the right tunes to match our celebratory mood, and we traversed in style the 40 miles to the casino, and toasted each other along the way.  Here's to the girls who kicked ass the last three years.  And you're welcome. 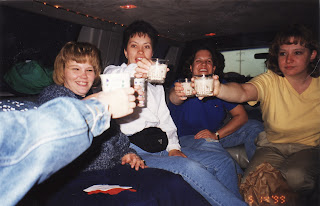 Back in the cold light of day, loose ends still needed to be tied.

Acme was benevolent enough to hire most of our people for internal positions.  Gaby ended up in the mail room, which was a complete slap in the face, but she was grateful to just have a job, so who was I to quibble?

Meanwhile, Peg and I devised a diabolical plan.

Another area of the company had deigned to hire us as supervisors.  And yet, neither of us had any intention of staying.

But we attended their meetings, and pretended to be entranced by their plans and discussions.

We waited until September 15, exactly two weeks before our scheduled transition date, and then, each of us, separately, requested a meeting with the department head.  And that's when we handed him our resignations.

When one is powerless, one does whatever they can to feel a smidgeon of power.

Our party planning was coming along nicely.  Signs had been designed, to festoon the hall in which we would hold our blowout.  We hired a DJ.  For the requisite drunken dancing.

We polled our people on whether they wanted the chicken or the prime rib.   We even designed clever invitations, adhering to our "everything must go" theme.  I sent one to Peter.

I don't know if Peter accepted the invitation because he wanted one last chance to impress Coreen, or if he truly was feeling sentimental about his once-thriving department.  Regardless, he assured me that he would attend.  I put aside my giddy excitement, because I still had lots of things to finish up before our drop-dead date.

Peter managed to do two things before September 30 rolled around.

Frankly, who is going to hire someone as a manager, who knows absolutely nothing about the company, or the corporate culture, and additionally, would need to be trained by someone who had applied for the position, but didn't get it, and thus, that person already hates you, so do you think they're going to give you accurate, comprehensive training?  Would you?

But it was a nice gesture, I guess.

The second little "gift" that Peter gave me, on my very last day, was an email he sent to all interested parties within the company, congratulating Pat in Allentown on being promoted to a manager position within IKFI.

I think, of all the indignities that I had suffered in the last four months, this one cut the deepest.

This hapless moron, who I had patiently tutored over and over and over again, and who still "didn't get it"; this clueless idiot whose daily phone calls made me recoil in horror; this semi-literate rube; was now a manager?  A title that Peter had bemoaned that he couldn't bestow upon me?

Thank you, Peter.  And I will never, ever forgive you.

This, of all indignities, on "blowout day".

But still we proceeded.

We had set up a podium in the meeting hall; I guess to rib people mercilessly.  To call them up to the front of the room and embarrass them.  That was kind of our calling card anyway.

I semi-recall that we presented some kind of gag gift to Peter that night.  Which was appropriate, because seeing him certainly made me gag.

And, to my embarrassment, a few people got up in the middle of the dinner, and gave speeches about me.  It was mortifying, and yet gratifying.  But I didn't cry.

The girls and boys had outdone themselves with the decor.  Dennis deserves the credit, really.  He did pretty much everything. 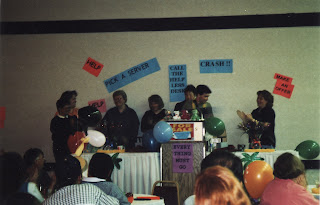 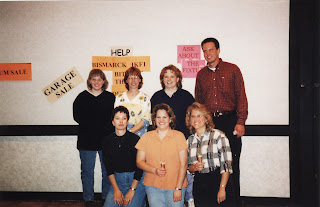 Peter and "us".  Note that I am wearing the same sweater that I wore on the night of our devastating restaurant dismissal.

I will admit, here and now, that I didn't hang around for most of the festivities.  I left.

I later heard through the grapevine that Peter made a huge fool of himself that night with one of our temp employees.  Whatever.  I no longer had to deal with Peter.  This was all past tense for me now.

I'd spent nine and half years (couldn't quite make it to 10!) with Acme Insurance Company.

I didn't even cry the last time I drove out of the parking lot.  My crying had been done four months before.  The one and only time I had allowed myself to cry.