The IKFI unit was an outcast.

We weren't "Claims", after all.  But we shared the same floor as Claims, albeit with our own entrance that no one from the Claims Department deigned to use, because, after all, that would taint them.

There is an inherent snobbery that exists in any office.  A pecking order.  "We're better than....(insert department name here)."

We weren't "smart" like Claims.  We did data entry.  Some of the Claims supervisors even stopped by from time to time to let me know what my division was doing wrong, since they, naturally, were the end users.  I didn't have a problem with that; I did have a problem with the way the feedback was conveyed.  The condescension.

So, even though I had been a top Claims supervisor before my promotion, I was no longer part of the clique.

So, IKFI just went its own way.

We kept growing, and growing rapidly.  We had to take over more office footage, because we were running out of room to seat everyone.  We still had that mix of permanent employees and temps, but by this point, it was understood that a temp position was an audition, really, for permanent placement.  A top performer was guaranteed the opportunity to be hired by the company, and that word had gotten around.

Our first Halloween rolled around, and we, naturally, were delighted to participate in the festivities.

You see, at our office, a tradition had been born back in the first year of our existence.  I don't know exactly how it started, but I do know that I was part of its inception.

We dressed up, as a unit, generally, in some type of theme.  That sounds innocuous enough, but what began as a simple dress-up contest with silly prizes, quickly snowballed into an all-out competition.  Quickly, after that, it was not good enough to simply dress up.  A group had to put on a "skit" of some sort; really wow the crowd...and especially the judges. 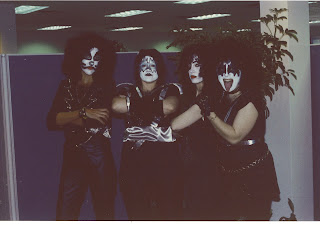 And progressed to this: 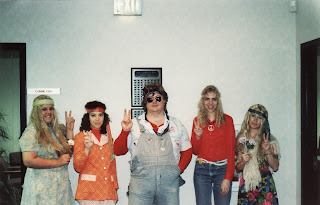 And on and on.

Since the IKFI people were considered morons and imbeciles, we decided to do a "Hee Haw" theme.  It was wonderful.  We had a lady dressed up as Minnie Pearl, with the price tag hanging from her flowered hat.  We had all manner of rubes, especially me; we had a woman in her flannel nightgown and nightcap, ironing at her ironing board.  We even had a cow. 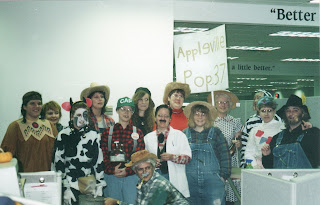 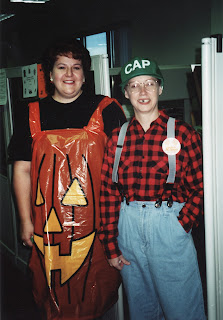 My mentor, Carlene, and me (I looked lovely!)

Oh, we were all lovely hayseeds.

Unfortunately, we were encroaching, it seems, upon a time-honored tradition; and when we won grand prize, well, that just capped it.

It was not our fault that the Claims units were lame.  They were timid.  We were not.  We had no reputation to uphold.  We didn't care.

As time passed, and things started to snowball, I was given the green light to hire additional supervisors.  We split into three units!  And then we hired a second shift!  Two more supervisors!  All total, by the end, we had over 150 people in IKFI.....from three to one hundred and fifty.  In about a year and a half.

The girl who was to become my "main supervisor", Laurel, had started out as an examiner in one of my Claims units.  We found that we shared the same birthday, so that became a natural bond, a starting point for our relationship.  When the opportunity arose to hire another supervisor, Laurel applied, and I took her immediately.  Laurel was one of those people whom you feel like you've known all your life, even if you've only known her for a minute.  She had that special touch.

Laurel became situated in a glass-walled supervisor cubicle halfway across the room from me.  We could look out and wave to each other, but other communication required direct face-to-face interaction, or a phone call.

By this time, Phil had been "uploaded" to a more responsible position in Fresno, California, proving that it's not what you know; it's who you know.  His replacement was Brenda, who'd been moved upstairs from the Customer Service Department.  Brenda, in essence, shared manager responsibilities with the lovely (to herself) blonde-haired Linda, who was persnickety and decorum-obsessed.  Both Linda and Brenda elevated their secretary, Lisa, to the highest level on the office pedestal.  Lisa was, for all intents and purposes, third in line of ascension to the Acme throne; well above us mere supervisors.

Some supervisors dealt with that insult by cultivating Lisa's friendship.  Laurel and I, on the other hand, dealt with it by being snarky at every turn.

One day, Brenda sent out a loving email to all the supervisors, informing us that Lisa had been blessed with additional responsibilities.  The email told of how indespensable Lisa was; what a vital wheel of the organization she had proven to be.

TIP:  If you are going to make snarky remarks about an email sent by, ostensibly your boss, be sure to hit "forward", and not "reply".

I don't remember exactly what I said, but it wasn't nice.  My intention was to forward my comments to Laurel, across the way; but I, as you have gathered by now, hit "reply" instead. 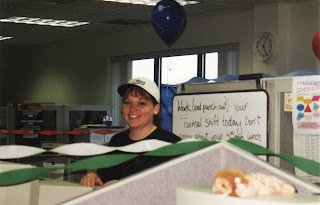 I can say without hesitation that we had fun.  And yet, we never shirked our work.  We posted great stats; both quality and production.  I believe it was because our people liked their jobs.

Who else had Elvis show up for my supe, Peg's, birthday?  Nobody, of course.  And, if anyone had even thought of it, would they think to corral an actual employee to play Elvis?  No.  They would have hired one of those impersonators.  And that would have stripped the occasion of all the fun (thanks, Rob!) 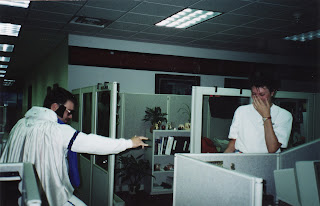 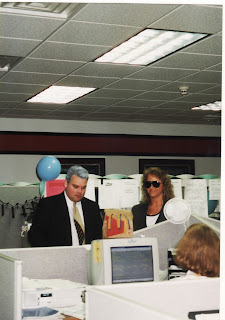 Shortly after the "hat days", the baton was passed, back there in Philly, to a new manager; a new overseer of the IKFI Department.

A new, young up-and-comer.  Out to prove himself, with our division as the catalyst.

His name was Peter.