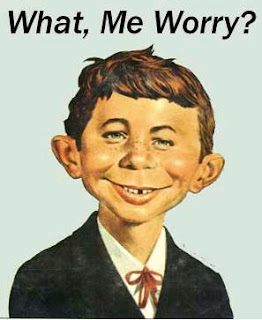 As you know, this blog is schizophrenic.  Not in the literal sense (as far as I know).  However, I do tend to veer from fun to sort of fun to sometimes semi-serious.

I leave the philosophizing to other people, because I'm not very good at it.  I don't know if I even have a philosophy, but if I had to choose one, I'd probably go with:  How bad could it be?

I use that philosophy in all sorts of circumstances.  Financial.  Procrastinationally (made that up).  Health-wise.  I'm either an eternal optimist or an eternal fool.

Which makes this post rather ironic, because, you see, I have been worrying a lot lately.  And I find that worries are like M&M's.  You can't just stop at one.

The financial state of....well, pretty much everyone...is not good.  And it's hit us directly.  Luckily, I have free things I can do for recreation (like this).

However, I still tend to worry (at least lately).  For example, why is it that one never experiences health-related issues until one no longer has good insurance (no offense to my company!  It's just that, when one's income is cut in half, having a high deductible is not helpful).  We've had minor issues, for sure, but each of us has had to make trips to the doctor, and in one instance, to urgent care, and we have to pay all these bills somehow.  Sure hope they don't mind installment payments!

I worry about my job.  However, I will either stop worrying or really start worrying around about the end of June.

BREAKING NEWS:  The private sector is "doing fine", according to the President.

I worry about the state of our country.  I find myself wishing we had someone who could make us feel better; more secure, but that President turned over the reigns about 24 years ago, and I'm pretty sure (okay, I know) he's not coming back.

I worry that I am fat.  Well, I am.  Not fat, per se.  But overly ripe.  I have a big event coming up in early fall, and I don't want to embarrass myself with my fatness, but I am really struggling with willpower.  I did great (well, good) the first two months, and then I used the excuse that it was my birthday, which apparently dragged on for a good couple of weeks, and now I'm trying to get back on the horse, and it's difficult.

In conjunction with this event, I have to spend money to buy fancy clothes and accessories.  I can't afford that.  Still have my Visa card, though, so there you go.

So, today, as I was taking Josie for a walk, the thought popped into my brain that I need to take a moratorium from worrying.  At least for a little while.

It's a nice, albeit a bit too hot, early summer day.  I took half a day off from work.  It's Friday.  Why should I use this time to worry about stuff?

I had to take a run to my local Walgreens this afternoon, to buy bathroom cups and a bottle of calcium (both really interesting things too shop for),  so I bought myself a bottle of nail polish.  Five dollars.  It's pretty.  I like it.  I painted my toes.  That five-dollar purchase made me happy.  I'm a cheap date.

I don't really listen to music much anymore, but I might do that tonight.  It's free.  Because I paid for it already.  Unlike my cable.

The little things do matter.  They alleviate the worry.  Sharing a laugh with a friend over something inane.  Creating something, even if it's just a blog post.  Buying a five-dollar bottle of nail polish.  Eating one of those 100-calorie Special K Crisps.  You'd be surprised how good they taste.  Sure, they're not Lays potato chips, but still.

So, I've decided that I am taking the weekend off.  Here's hoping your weekend, too, is worry-free.