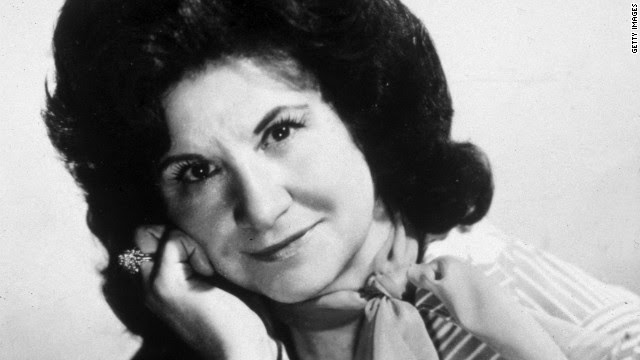 It's hard, now, to imagine a country music world without female singers, but there was a time.  1952, to be exact.

To say that Kitty Wells opened doors for women singers is an understatement.  Without Kitty, there would be no Loretta, no Tammy, no Dolly, no Shania; certainly no Carrie or Taylor.

Apparently, in the world of country music, in 1952, women weren't only to be seen and not heard, they weren't even supposed to be seen!

Kitty only recorded her signature song in order to earn the $125.00 that the recording session paid.  She was a wife and a mom, and was looking forward to getting off the road, and staying home.

If only she'd known.


How many girl singers have covered that song?  Which ones haven't?

This is my favorite cover.  Why?   Well, there are four legends on this recording (sorry, no video to be found):

Tonight, I thought I'd let a couple who have followed in her footsteps pay their own tributes to Kitty:


Rest in peace, Kitty.  What an admirable life.