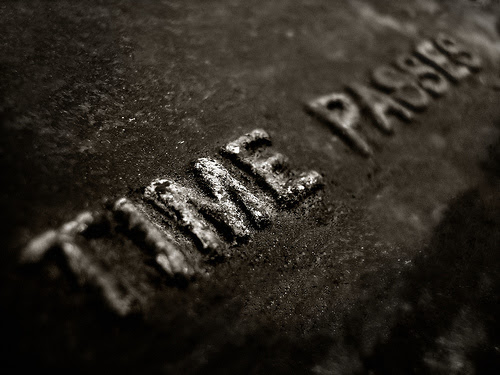 I left Acme Insurance Company at the end of September, 1999.....by my choice.

It's important that I say that....my choice.  They may have wished I would leave, but they never told me to leave.  The powers-that-be offered to make accommodations for me.  They were willing to "slot me in" to a job; willing to brush the dust off a neglected desk in a dark corner of the room.   I would be welcome to sit in on their planning sessions.  And speak only when spoken to.

I guess I should have been grateful.  They could have kicked me out the door.  My department no longer existed, at least, not there.

Maybe it was hubris on my part, but I sensed that they were being forced to accept me.  As if they felt I had little to nothing to offer, but they didn't want it on their conscience that another Acme employee was now standing in line at the unemployment office.

And the truth is, I didn't want to stay.  In that respect, they and I were simpatico.  When that cold wind blew in on a desolate day in May, I knew that it was time to move on.  All that remained for me, those last four months, was to sweep out the ashes, and make sure everything was in pristine order when I at last flicked off the light on September 30.

My life had changed, too, in more important ways.  My marriage was over.  My youngest son was moving away to college.  I had no marriage, an empty nest, and a job offer that made me queasy with dread.

It was time to go.

The new man in my life couldn't understand why I had to wait until that very last day.   If I hadn't been responsible for all those people, maybe I wouldn't have stayed.  But I was responsible.  It was a matter of honor.  I wasn't going to leave them, bail out on them.  We all needed to see it through together, to the end.

And then I loaded up the moving truck and I drove away, to a new life, in a new state.

I obviously needed to find work, so I searched my new hometown newspaper, and I applied for some secretarial positions.  I had always hated, hated being a secretary, but I didn't really know what else I was good for.

An early job interview seemed to go well, until the very end, when I stood up to shake hands with the boss.  I said something like, "It was nice meeting you, Bob", and I saw him flinch.  I had apparently made the faux pas of calling the man by his first name.  I knew then that I would not get a callback, and I didn't.  I did not actually want the job, but it still puzzles me why the guy was so offended at being addressed by his first name.  Did all the employees there have to address him as Mister?  That's just a bit too eerie for me.  He wasn't from an older generation; he was probably younger than me.  This is probably not a guy anyone would want to work for.  No wonder there was a job opening.

After about a month, I landed a job interview at an insurance company.  Much more relevant!  The building was about six blocks from where I lived, so it all seemed too good to be true.  I interviewed in a small alcove adjacent to the brightly-lit, plant-festooned lobby.  It seemed like a neat place!  And I got the job!

When I showed up for work on the following Monday, I found that the only area of the entire building that was modern, up-to-date, was the lobby itself.  I was shepherded into my new work space, which consisted of a dark, drab office with three broken-down, dusty desks, a telephone, and a green-tinged CRT.  No computer; just a CRT.  And I also was given a calculator and a pen.

The hallways were littered with boxes of files, each file representing a lost and alone client, who hoped that one day some kind soul might find them and treat them with a little loving care.  Alas, client files were consistently lost and unaccounted for.  Possibly due to the eighteenth century "filing system" that the company employed.

I was given the list of company rules that first day.  Number one, if I needed any type of office supply, I would need to requisition the supervisor, who would deliberate, and make a determination as to whether I really needed a new pen.  If she answered in the affirmative, she would then rifle through her chain of keys to find the one that would unlock the super-secret supply closet.   And, thus, I would get my new pen!

Number two, I needed to punch out for my ten-minute break.  Now, I'm not an attorney, but I think that is actually illegal.  I do believe, at least in my state, that employees are entitled to two fifteen-minute paid breaks per eight hours worked.

No wonder the people with whom I came in contact at the Superlative Insurance Company all seemed to be the dregs of the earth.  Many of them didn't seem to even bother to bathe or to change clothes more than once a week.  Who else would put up with this nonsense?

I worked at SIC for approximately one month.  That entire month, I sat and stared at my green CRT screen (I had received absolutely no training for my so-called job).  I sometimes punched random numbers into my calculator.  I scribbled some gibberish onto a legal pad.  I was going insane.

The only saving grace for me was the want ads.  I applied for any and every insurance opening that i could find.

When the call came to be interviewed for a claims position at an actual, real insurance company, I was jubilant.   The interview went well, and, in fact, the HR person called me only two hours later to offer me the job.  I took it!

I then called SIC and said, sorry, I'm not coming back.  This was the one and only time in my life that I did not extend the courtesy of giving a two-week notice.  They actually called me back a couple of times, begging me to reconsider.  And I'm thinking, if I am so valuable, and I haven't done one single thing for the full month I worked there, how bad do the other employees have to be?

I have a wonderful job now.  It's been 13 years, and I couldn't be happier.  And the boss I have now, believe it or not, worked at Acme Insurance Company in my hometown back in 1990, the same year I started there.  We worked in different departments, but I had met her, and I was flabbergasted at the way life circles around.

Well, time and miles can play havoc with friendships.  I haven't spoken to my "main supervisor", Laurel, in many years.  We tried to stay in touch, but it just didn't take.

My compadre, Peg, who began as my assistant, and ended up as a comrade in arms ~ we still email maybe once a year.  It's difficult to maintain a relationship, when one never sees the other.  Life passes by.

I'm friends with a few fellow veterans on Facebook........my assistant, Kristen, who never got the promotion she deserved.  She's married now, and lives in Denver.  She's a new mom.  Carissa, who was goofy and fun (and a bit immature then) is married, too, and has a one-year-old.  She's a Montessori teacher.  Kelly, who was the most nervous interviewee I ever met in my life.....Laurel and I debated and debated about whether to hire her, and we ultimately went with someone else, who didn't work out.  So, I called Kelly back, after a month or so, and offered her the job.  She turned out to be sublime!  Lesson learned.  Kelly was our cheerleader in the Grease extravaganza.

Dennis, who always had my back, and who videotaped all our stupid adventures, and who was the main planner for the IKFI picnic and for the "going out of business" party, and was a real sport about dancing in the Grease skit, is a Facebook friend.  He doesn't work for Acme.  Props for that!

Gaby, my first official and unofficial employee, is my friend, too.  She, of course, doesn't realize the impact she made on the IKFI department, from the start, but she was indispensable.

And my mentor, Carlene.  She still works for Acme, after all these years!  Carlene never posts on Facebook, but we reconnected there, and we've had a couple of laughs about the whole "trunk" episode.  Some events can never be forgotten.

Well, I did Google them.

Peter apparently lives in Denver now, and I take it, no longer works for Acme.  I actually, way back when I first joined Facebook, sent him a friend request, and he ignored it.  I don't even know why I wanted to be his friend, except maybe I was ready to let bygones be bygones.  He either had absolutely no idea who I was, or did know who I was, and wasn't interested in rekindling a time that both of us would be better off forgetting.  I have no hurt feelings over that.

Phil, if Google is up-to-date, still lives in Fresno, although, apparently, he has moved on from Acme, and is now a manager of some sort with a different insurance company.  I bet the employees there get real tired of hearing him boast about how much better things are, since he took over.

Dave, the guy who saw something in me, is on Linkedin, and is tagged as an "investment adviser".   Guess he left Acme, too.  Life is probably a lot simpler now.

The lovely Linda, who was always a persnickety pain in the ass, still works for Acme!  She has the title of head of Claim Cost Management and Quality Improvement.  I guess somebody finally realized that she had no business managing anybody, and they tucked her away somewhere far, far away from actual people, where she can punch numbers into her calculator all the live-long day, and smile to herself in the mirror, giving an imperceptible nod to the wonders of her glorious self.

I don't know if Brenda (who I pulled a "Shelly" on) still works for Acme.  Her Facebook page lists no employer.  If she was smart, and I know she was, she high-tailed it out of that hell-hole, and now lives an actual life.  I hope so.  She was always fair and decent with me.  And she forgave my indiscretions.

The evil boss, Connie, the woman who threatened my livelihood, has absolutely no web presence.  I'm puzzled by that.  I would assume she has friends, right?  Or, at the very least, family.  Almost everybody joins Facebook.  I would hope that she is not still suffering from abject humiliation, after all this time.  And is thus keeping a low profile.  We, as human beings, learn and we grow.  Heck, I'd even "friend" her, if she was there, on FB.  Probably more out of curiosity that anything, but, too, I guess I wouldn't mind having a dialogue with her.

What seems really crappy one day, or one year, eventually fades from our consciousness.  And we're left with only the good times.  Even those I struggle to remember.

Oh, and the data entry thing?  I hear they've since outsourced it all to India.  I wonder what the equivalent to "Grease" is there.......