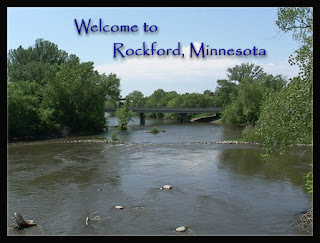 Don't get me wrong; we loved the town, but hated the commute.

I don't know exactly what possessed us to buy a house in Rockford, which was 25 miles from my workplace, and even further from my husband's.  On a winding two-lane blacktop.  I think it was the lure of the quiet.

We looked at the house, and it was fine.  It needed work!  But overall it was a nice simple house.

But it wasn't the house.  It was the ambience.  The Crow River was but a few footsteps outside our front door.  And leading to the Crow was a huge, mostly deserted city park.  We'd walk across a couple of quiet street corners, and up the hill to the park and down the graveled trail to the river.  I don't know if we ever crossed paths with one single person on those walks. 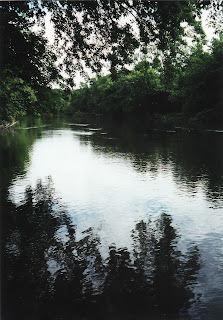 The Crow was a pretty, meandering river, most of the time.  But during the spring that we lived in Rockford, it became angry and effusive. It overtook the second major throughway out of town, and we'd walk up to the edge of it and marvel at its insistence. 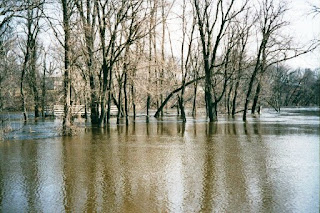 Rockford had 3,484 inhabitants when we lived there.  That's a nice, small town.  It didn't offer a whole lot in terms of amenities.  It had an A and W Root Beer store.  Remember those?  It had a couple of convenience stores on the outskirts.  It had a mostly empty shopping mall, in which some brave soul decided to open a book store while we lived there in town.  Sadly, the guy had only a few books and no customers.  We walked in one day, and perused the shelves, and pretended to be really interested in his offerings, but alas, we walked out without making a purchase.  I always felt really bad for that guy.  His book store didn't last long.

The little mall did have what I guess one would call a "general store".  Sort of like a Ben Franklin, only locally owned.  I love stores like that!  One can find the neatest curios in those stores; nothing that could be found anywhere else.  One-of-a-kinds.  I bought all manner of knick knacks there.

Just down the street from us was Virgin's Furniture (and, oddly, video rental store).  Again, Virgin's had unique furniture pieces that could not be found elsewhere.  I bought my mauve gliding rocker at Virgin's (pronounced Vir-GEENS; embarrassingly not, "VIR-gins", like we mistakenly thought).  We also bought other furniture pieces there, and we, sadly, only still have a couple of those.  We'd also rent our Friday night VHS movies at the store.  And then we'd drive over to the locally-owned convenience store and buy Subway sandwiches at the counter way in the back.

Every Tuesday night, we'd visit the local library, which was tiny!  It was just a hop and a skip from our house.  I kinda liked that it was tiny.  Too many choices can leave one feeling confused and frustrated.  At Rockford's library, we took what we could find, and returning our checkouts was a breeze.  No hassle.  A short walk down the street, and voila!

One late Friday night, we took a tentative walk through the Rockford cemetery, which, again, was but two blocks from our home.  It was mystical; eerie. 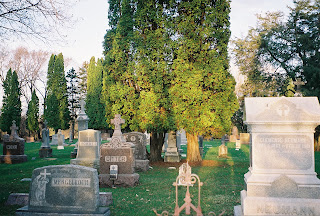 In daylight, I took endless pictures of the town's landmarks.   There was a small-town bar, which reminded me so much of my Uncle Howard's place from long ago.  I think this one was called the Red Vest.  We went there once.  Ordered a beer; bellied up to the bar; and that was the first and last time we ever saw the inside of the place. 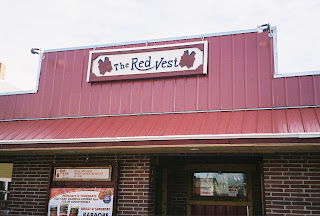 We walked our dog, Henry, down underneath the stone bridge to the river, sat down on a log, and proceeded to be attacked by killer bees.  Neither of us (not to mention Henry) had ever been stung by a bee in all our years of living, but we found out that evening that we could live through it!  The vicious bee attack didn't kill us!

A glorious wonder of nature existed there; south, and across the railroad tracks and up about three miles; it was called Lake Rebecca.  One of the prettiest lakes I've seen in all my life.  And it was just there; alone; seemingly isolated, undiscovered.  Not really, though.  It was popular; in fact, hugely popular.  It was just that we had never chanced to ride our bicycles there at a time when picnic-ers and mommies with floatation-equipped babies happened to drop by.

And speaking of bicycling....my husband seemingly had the good bike.  I had the crappy one.  We'd bought our bikes at a garage sale, and apparently I drew the short straw.  He'd be riding so far ahead of me that I would lose him if he happened to finesse a curve in the road.  He made me think I was a weakling; a shirker.  Those rides to Lake Rebecca would have been so much more enjoyable to me if I'd had something that would have actually propelled me forward.  I actually had to stop at times; alight from the evil two-wheeler and walk around a bit until I re-found my breath.

One of the neat things about living in a small town is that one can walk the streets and explore.  There were always interesting new things for us to discover. 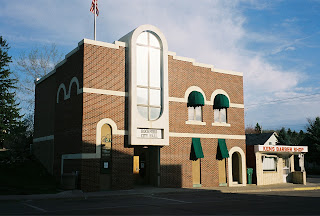 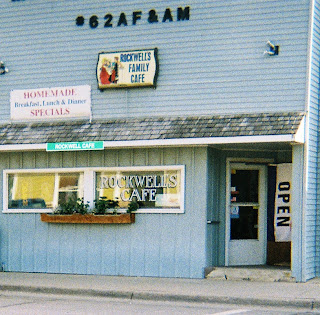 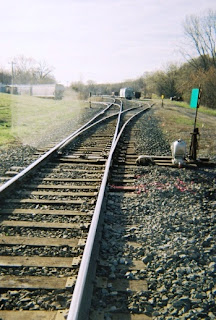 We could likewise drive the country roads and experience a bit of forgotten Americana. 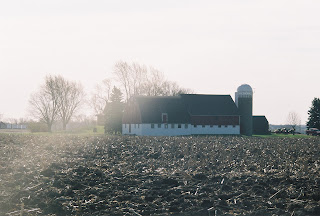 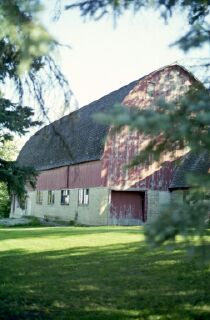 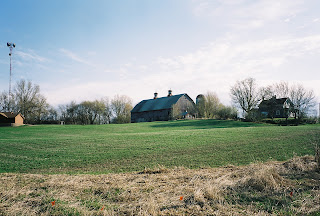 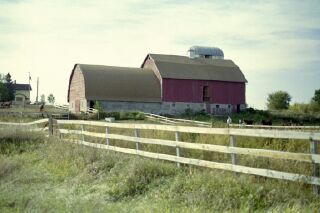 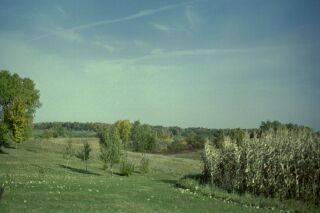 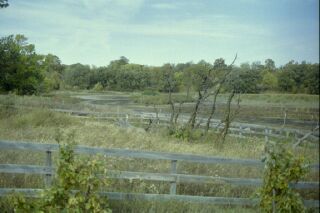 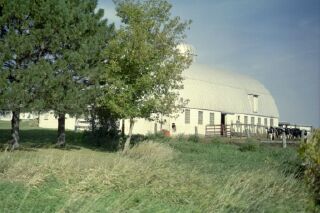 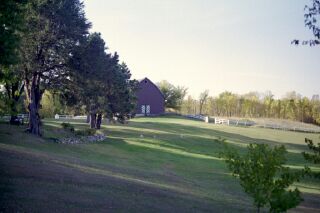 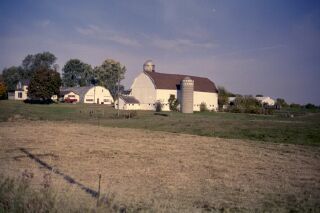 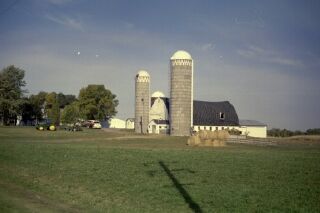 We were somewhat curious about a bar along the main street in town; one that apparently attracted bikers from far and wide.  Some Saturdays, there would be Harleys parked extremely neatly, one by one, in a polite formation, along the block in front of that place.  Again, we walked in one time.  I ordered a Diet Coke.  I think I also used the pay phone.  And then we left.  We just really wanted to see what all the fuss was about.

We switched our banking to the Bank of Rockford.  That seemed only reasonable.  We wanted to attain that small town spirit, after all.  The Bank of Rockford was but two blocks down a deserted street from our home.

Everything was close.  Really close.  We loved it, but we came to detest it.

We loved the atmosphere.  Hated the small-town-mindedness.  The obtrusiveness, and yet the possessiveness.   The only shop keeper who ever made us feel welcome was the Pakistani owner of the convenience store.  I guess he knew what it felt like to be an outsider, too.

My husband had never experienced a small town.  I had.  I knew what existed below the surface.

For FAWM 2008, I wrote a tongue-in-cheek song called, Leaving Rockford.  Here are the lyrics:

If you read an ad for a nice
Two-bedroom number
And you think it sounds really
Sweet and unencumbered
Please buy it, I need the money
To move on

I also wrote another song about Rockford, although I purposely obscured the details.  It's called "Rundown Town":

So, I have kind of a love-hate relationship with the town, obviously.  But I wouldn't, for the world, change the fact that we lived there, we loved it; we sometimes hated it.

And I will never regret it or forget it.