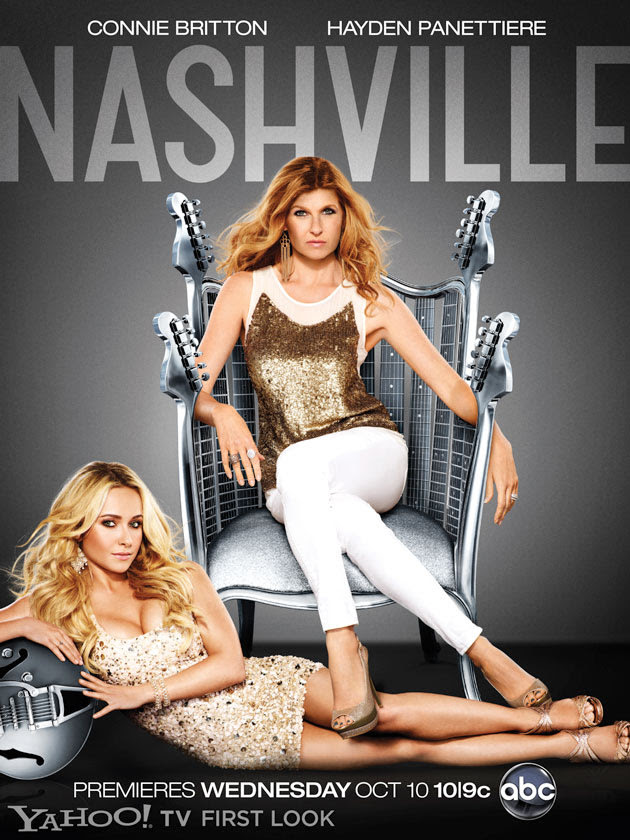 I generally deplore night-time soaps, which is, face it, what almost all so-called "television dramas" are nowadays.

It's not so-much that the shows are poorly-written and trite (well, that's a big part of it), but I don't like to commit myself to watching every episode.  TV should be fun and relaxing; not something to cross off one's to-do list.

That said, I thought I would give Nashville a whirl.  It got glowing reviews on Entertainment Weekly's site (that political hack-rag), and the show is ostensibly about a topic I am semi-interested in.

I will say that the premiere was compelling.  It kept my interest for the entire hour, unlike other shows I've been sucked into trying, which I ended up deleting from my DVR queue after 10 or 15 minutes of utter boredom.

About the show:  It's patently obvious that Hayden Panettiere's character, Juliette Barnes, is modeled after Taylor Swift; not in the "slut" aspect (hopefully!), but in the auto-tuned crappy pop singer vein.  A running dialogue throughout the episode made clear that Juliette's brand of styrofoam music is leading country down the path to ruin, but hey!  That's where the money is!  So....

Connie Britton's Rana is, I'm assuming, a fine-lined used-to-be flavor of the week Faith Hill.  Because Rana is certainly no Martina or even Reba.  Rana bemoans Juliette's "adolescent crap", as she watches her inappropriately-dressed-for-the-Grand-Ol-Opry performance.  Yet, what did we hear emanating from Rana's tonsils just a few moments before, up on that stage?  Maybe not adolescent, but certainly "crap".  (The musical director, and I'm talking to you, T Bone Burnett, needs to come up with better songs.)

Rana professes to adore Rose Colored Glasses, in a radio interview, and she no doubt does, but the 1990's gestation from whence she launched her career was more about "Breathe" than "Stand By Your Man".

Much of the premiere was devoted to a minor storyline involving Rana's diabolical JR-dad, played by Powers Booth, who I love (see "Hatfields and McCoys"), but who I detest in this incarnation.  It's not Powers' fault that his Lamar is a caricature; that's how the part was written.  But the whole backroom political wheeling and dealing just detracts from what the focus of the show should be - the music industry.

The most preposterous scene in the premier involved Deacon's niece, Scarlett, and her little notebook of poems, which her shy admirer, Gunnar, magically turned into "songs".  He, in fact, exclaimed to her, "These aren't poems!  These are songs!"  Malarkey (as Joe Biden would say).  Trust me, poems are not songs.  First of all, a poem generally does not have a chorus....or a bridge.  But ah, this is really fantasy land, so we'll call them "songs".

Rana's producer, Watty White (ick of a name - Watty?), played by JD Souther, who is no slouch when it comes to music (!) is, to me, the most believable character in the show.  He acts like a real producer would; no over-the-top exclamations; just serious; thoughtful.  Watty is in the Bluebird audience, when (magically!) there is time to kill, since nobody had signed up to perform (okay......come on.....).  Thus, Gunnar coaxes Scarlett to join him up on the stage to perform one of the "song-poems".   Scarlett tells the crowd that she's never sung into a "real microphone" before; yet, she gives lie to that deceit when she immediately transforms into a sultry jazzy Lena Horne before our eyes.  Kudos, though, to Sam Palladio and Clare Bowen for, without a doubt, the best song and best performance of the lot.  I don't know what the name of that song is, but I think I might have to look it up.  And wow, that Sam sure has a big vocal range!  Song isn't country, though, but good is good.  That's all I ask in my music nowadays.

It could be interesting to see where this show goes.  I hope they tone down the evil Daddy stuff, and go with their strengths - commentary on the "business" of country music.

Nashville is far from realistic, but it's TV, after all.

I give the premiere a solid B.