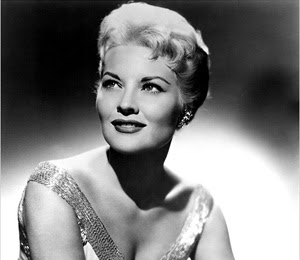 My dad liked Patti Page's records.  I wasn't actually a part of this world yet when Patti dominated the record charts, so I can't claim to have much acquaintance with her (music).

Reading about her life, though, I was struck by some fascinating bits of trivia.  Her real name wasn't Patti Page.  She was named after the Page Milk Company, when she became its new girl singer!

The music business in the fifth decade of the twentieth century looks rather alien from my 60-year-later vantage point. A singer having to assume the name of the company who sponsors her?

I guess it could be worse.

Patti Page was born Clara Ann Fowler, which, to me, is a completely acceptable name.  Regardless, she was a huge talent, and whatever it took to get that voice out to the world, so be it.  And she was really pretty!  One would not look at the picture above and associate that with a song like "How Much Is That Doggie In The Window?"  Apparently, Patti was an enigma.  Or, she just had industry guys telling her what she had to record.

Patti was also among the first to record her own four-part harmony (for financial reasons).  I had always assumed (wrongly!) that Les Paul and Mary Ford developed that practice.  I stand corrected.

I, of course, heard the Tennessee Waltz many times.  Even though it was first a hit in 1950, the recording has never really left the stage, even after 63 years.  Interestingly, Tennessee Waltz was supposed to be a throwaway.  It was the B Side to a novelty tune called Boogie Woogie Santa Claus.  Ever heard of that?  Of course not.  Record guys aren't necessarily all that bright, apparently.

As a kid, I, of course, was familiar with the doggie song.  What kid of the 1950's wasn't?  The song always made me laugh, because it was so kitschy.  I might have been a little kid, but I still had good musical taste.  That song, though, is an ear worm.  Just my mention of it has caused it to roll around inside your head, hasn't it?  I also thought the dog barking was a neat flourish....ha

So, before we all go completely crazy, needing to get that song out of our brain, here it is:

Hearing Patti Page sing reminds me of my dad.  It was his time, and he loved music, even the sort of music that was forced upon music lovers three score and three years ago.

I still think Tennessee Waltz is a hell of a song, though.

Email ThisBlogThis!Share to TwitterShare to FacebookShare to Pinterest
Labels: goodbyes, how much is that doggie, patti page, tennessee waltz