A Little Reminiscing About Nineties Country 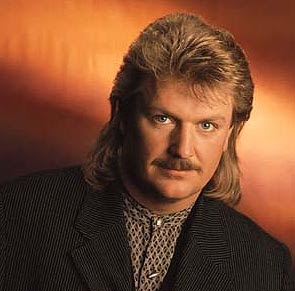 Maybe it was the place I lived, and the time I lived there, but it seemed like everywhere in my home town; at work, out with friends, hanging out with relatives; everybody listened to country.

I remember we did some kind of stupid team building exercise in my workplace once; in which we had everyone fill out a survey; and subsequently, everyone had to mingle about to try to find people whose answers matched the ones on the card in their hand.  I guess it was Employee Bingo.

One of the questions I offered, as we supervisors were wasting time devising this little game, was, What's Your Favorite Song?

Out of the one hundred or so people completing the survey, perhaps one or two listed a non-country song as their favorite.  And the people responding weren't senior citizens or even demented people (well, generally).  They were for the most part younger than me.

That's not how it is now.  Today, if I ever have an opportunity to listen to music at work, I feel like I'm a teenager again; hiding the fact that the songs wafting through my ear buds are country songs.  (I don't actually hide it anymore.  I'm frankly too old to care what people think of my taste in music.)

I miss the old times; perhaps the camaraderie; maybe simply the superiority of the music.

Today, being a Friday, and thus blissfully more laid back, I surfed on over to my Amazon cloud and set my playlist to "shuffle".  It's fun to be surprised by the next song; which is never actually a song that one would choose from the list.

And I heard Joe Diffie.  Remember him?  What do you mean, no?

This guy is a hell of a singer.  I mean, a singer.  Not a vocal stylist, a la guys whose names start with a K(enny) or a T(im) ~ you know; the guys from which measly little sounds manage to squeak out of their pie holes, helped along with generous doses of auto tune..Guys who sing from their throats; and not from their diaphragms, which is why they squeak.

Joe Diffie was pretty big in the nineties.  Sure, he recorded some mediocre stuff.  Whenever he strayed from his strengths (ballads) into territory best covered by the Billy Ray Cyrus types, he mostly failed (at least with me).  Any clown could do those songs.  But when he let it all hang out, wow!

Sometimes you didn't even know what the song was about, but you knew it was sad, because he sang it so sad; it hit you in the gut.

I generally don't like novelty songs, but this one is so sweet.  And it's not really a novelty; rather, just catchy.  I used to go to the Fourth of July parade with my dad and a bunch of my family; and one year, as the farm implements passed by (my dad loved those); a John Deere float appeared, with this song blaring out of the speakers (I can't believe Joe never made a music video of this song).  You know, this record allowed all of us to rejoice in our rural roots, and stop being so embarrassed by them. People today would kill to live on a farm (although, I must disclose that my dad hated John Deeres and loved his IH's):

Joe could honky tonk with the best of 'em, too.  Pull somebody (anybody) out on the dance floor in the nineteen nineties, and you could wear yourself out steppin' to this song:


Joe's star started to twinkle out toward the end of the decade (oh sure, he's still performing!)  The times, though, were changing, and not for the better.

Yet, he had this song in 1999 that still hit number six on the charts; and listening to it, sitting on the floor next to my CD player in the basement, made me gulp back tears.  He just sang it so damn sad!  My youngest son would saunter through the room to head upstairs and out the door, and give me a pitying look; same as the time I was playing Alan Jackson's Christmas CD, and he asked me if this was "the saddest Christmas ever".  He didn't get country music. Sometimes we just want to be sad!

This is "A Night To Remember":

I guess some artists have their time; and when that time is over, well, everybody moves on.  There's other guys like Joe; guys (and girls) who were red hot in their day.  They were good; and they didn't change.  Sure, they got older, which is some sort of crime, you know.  No, the music changed.   Music became disposable; it became a "package".

Now, guys sing about pickups a lot.  But the pickups they drive are those sleek four-by-fours; not the beat-up farm trucks that actually haul things in their beds.

They don't sing about John Deere tractors.  The biggest tractors these guys drive are lawn tractors, whenever they feel like "getting back to nature" and giving their grounds crew the day off.

All I'm saying is, don't forget the good stuff.  You can like the stuff of today.  Just don't forget.  You know, George Jones only died a couple of weeks ago.