Entertainment Weekly recently decided it would become the purveyor of the top one hundred everything: movies, music, books, a bunch of other stuff that I haven't yet turned the page to find.

That's a slippery slope! And inherently fraught with miscues. Who's to say that their "experts" are any more expert than you or I? Just perusing their music list confirmed my worst suspicions. The only country artists they seem to know exist are Johnny Cash and Dolly Parton.

So, as a counterpoint to EW, I decided to offer my own list. And it won't even cost you $19.95 for a three-month subscription. You can have all of it for free! (donations, I probably should mention, are accepted).

My modus operandi is a bit different, however. I decided I would pick somebody and cite my favorite thing that person has done.

So, let's talk about George Strait.

I have a weird...compulsion...I guess you would call it. I determined long ago that I would own every album George Strait ever released. I kept to that promise until I realized, belatedly, that George had issued a new release in May. And the fact of the matter is, I didn't even care. Let's be frank. George's albums stopped being good about, oh, ten years ago or so. I think he forgot what country music is. Forgetfulness is a hazard for people George's age; and mine.

To be fair, I just now surfed over to Amazon and sampled every track on George's new album. Yup. Boring. Bad. Forgettable. I'm shelving (ha ha) my George Strait music collection for now.

There was a time, however, when ol' George could be counted on, when few other artists could, to satisfy us music lovers' craving for something tasty.

I tried really hard to narrow his best albums down to one, but I couldn't do it. I have two favorites. 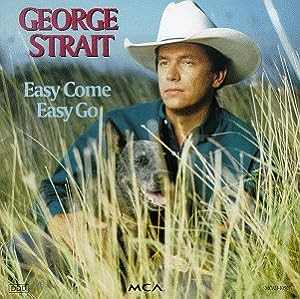 You can buy it and/or listen to samples here

This album is one on which George sings country music. Scoff if you will, but have you listened to him lately?

I looked for videos for some of the songs on the album, but naturally, he didn't bother to make any. Luckily, though, somebody thought enough of some of these songs to put 'em up there on YouTube, regardless.

Here is one of my favorites:


I love that song!

Here's another one, written by Jim Lauderdale:


I remember when Faron Young released the single of this next song. I love Faron Young, and I obviously love George Strait, so this is a win-win for me:


There are a bunch of other great tracks on Easy Come Easy Go, but I don't want this post to be two miles long, so listen to them/buy them, if you like country music (emphasis on "country"). 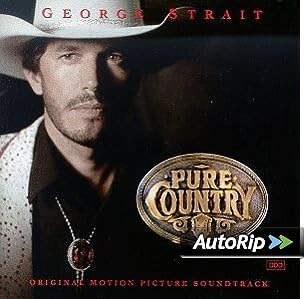 Buy and/or listen to samples here

Did you see that movie - Pure Country? It was pretty cringe-worthy.  I avoided seeing it for as long as I could, and then somebody gave me the VHS version as a gift.

Somebody, somewhere, talked George into "acting". I don't think he thought it was a good idea, and he was absolutely correct. But sometimes one just has to try stuff.

I also avoided the soundtrack for a long while; the reason being that I figured George for a "pure" artist; not one who would be influenced by a slab of songs thrown together to illustrate the so-called "plot" of a movie. Maybe I had too many flashbacks of watching Elvis in his "Blue Something or Other" movies.

Thing is, though, this album is good!

My friend Peg, and I, used to sing along with this song; over-acting it out; being fools who thought they were clever. The fact is, though, this is a hell of a song.


I don't know what numbskull thought this next song went with this video, but it's kind of jarring, because the action is much too fast for the song, but, alas, this was the best I could find. This is another "what the hell; how good is this songwriter?" song written by Jim Lauderdale:

George knows how to cry a song:

Dang, I think I might have narrowed my favorite George Strait CD down to one.

Too late. You are now stuck with two great ones.

Shoot, if I still had a working VCR, I just might be tempted to watch "Pure Country" again.