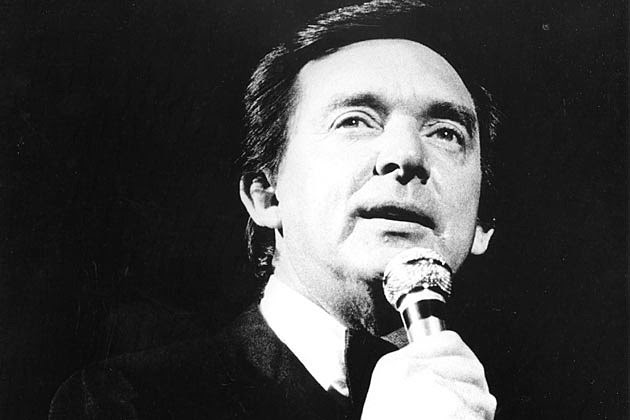 If Ray Price wasn't the first country voice I ever heard, I can confidently say he was the second.

When I was a little, little kid, my parents owned exactly two record albums - Together Again/My Heart Skips a Beat by Buck Owens and Burning Memories by Ray Price. I had a little record player but I rarely had money to buy 45's, so I etched grooves in those two albums. I think, even today, I could reel off the track listings, in order, from Burning Memories.

On the album, released in 1965, Ray was beginning to teeter between his signature twin fiddle sound and the tinkling piano keys and sweet strings. The tracks were still clearly country, but it was evident then that Ray's sound was evolving. I wonder if the individual tracks were recorded several months apart, such was the dichotomy.

One of the best country songs ever was included on that album - Here Comes My Baby, written by Dottie West (track two, in case you're keeping score):


Being a little kid, I wasn't familiar with Ray's earlier work, but eventually I began to hear it on oldies hours and on reruns of syndicated country music TV shows. The twin fiddles were in rare form back then. For example, this song (extra points for the Nudie suit):


Time, of course, marched on, and I became a sullen teenager, slamming the bedroom door behind me to spin my Monkees 45's. Out of the blue one day, my mom came out of her bedroom holding an eight-by-ten glossy of Ray Price, swooning about how "handsome" he was. Handsome? That old guy? He must have been, I don't know, forty? Ray Price was the only entertainer my mom ever had a crush on, at least as far as I know.

By that time, Ray had shrugged off the twin fiddles completely and had adopted the countrypolitan sound. I wasn't a fan. Although I had one foot in tween pop and the other foot planted in country music, I still liked my country to sound country. I never actually voiced it, but I felt a bit betrayed by Ray. Now he was some guy wearing a smoking jacket, sitting in his den, sipping a martini. Frank Sinatra-lite.

But then I heard this song, which, I think, was the B side of one of Ray's current hits. I never admitted to anyone that I liked it, but it was pretty groovy.

Thanks to Willie Nelson:


Naturally, everybody knows Ray's biggest hit. It rolled around in the year 1970, written by some unknown Nashville hanger-on named Kris. Wonder if that guy ever wrote any other hit songs.


By the 1980's, Ray had either moved on or lost his record deal with Columbia, and he was considered too old for the "hip" country market, which, when you think about it, is an oxymoron. Country music was never hip. He and Willie did record a duet album of country standards, a lot of them old Bob Wills songs, and I bought it and I still have it...somewhere. Here's a taste:


Seeing as how Ray was "washed up" by the early 1980's, it's unimaginable that he kept going for another thirty-odd years, but that's exactly what he did.

Here's what Merle Haggard had to say about Ray Price:

"He was probably the first outlaw," Haggard said. "I think Willie (Nelson) will agree. He was out there fighting for what he believed and doing it his way, and being criticized and all that. I remember when he laid the guitar down and started hiring violin players and all that, and everybody thought he was crazy. Crazy like a fox. He knew what he was doing."

My mom and dad saw Ray and his Cherokee Cowboys in concert at Panther Hall in Fort Worth, Texas. I don't think I was there. I wish I was. I can never hear a Ray Price recording without thinking about my mom and dad. They're forever intertwined.

When I found out that my dad had died, I was living far away. A couple of nights before we set out to travel to my dad's funeral, I sat in the rocker in my bedroom and played this song over and over, and I cried:


I'm feeling pretty melancholy knowing that Ray Price has passed away, but I feel sort of happy, too. I think he's putting on a concert right about now, and my mom is in the front row, swooning, and my dad is beside her, singing along.