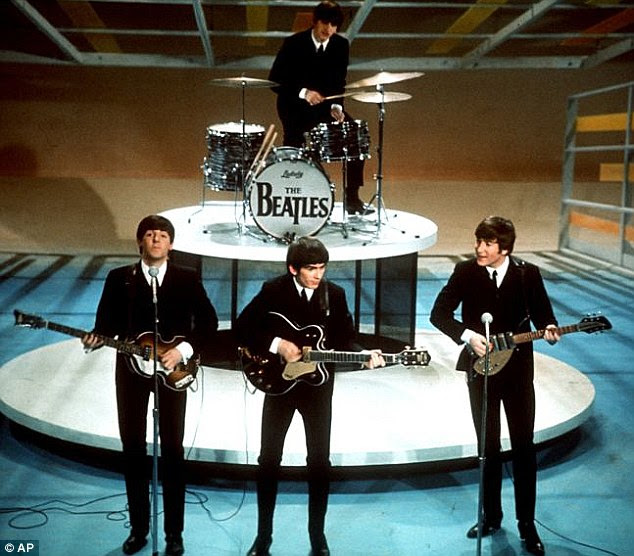 I was a farm kid riding Bus Number Seven to school every day. The Beatles didn't know about me, or care, but I sure knew about them. My repertoire of music up 'til then consisted of my older sisters' Elvis Presley records and Eddie Cochran's Summertime Blues. Those tunes were all well and good, but kind of outdated for the hip early nineteen sixties. Elvis and Eddie were my sisters' music, not mine. I'd only grabbed hold of them because what else was there, really? Connie Francis?

The Beatles, though, they were mine. My sisters didn't get it; my parents sure didn't. I stood on the sidewalk across from Valley Elementary, delaying my walk to Wednesday catechism, and had a heart-to-heart talk with Debbie Lealos about these four British guys who were making music like nothing either of us had ever heard before. And talking about the cute one - Paul.

Cuteness was very important to a fourth-grader. Cuteness held a cache that colored our ten-year-old critique of The Beatles' music.After all, John was married. Thus, our chances of marrying John were nil. Ringo was odd-looking; George was too skinny.

Yes, it was Paul who all the girls were determined to marry - determined to become Mrs. Paul McCartney. It could happen. Paul would see us for the cool girls we were. He'd sweep us off our feet. To hell with Jane Asher.I waited and watched for Paul on that three-block walk to Sacred Heart Cathedral, but he never once whizzed by in his Aston-Martin, or whatever the English cars were called.

I never gave up, though. I spent the entirety of my hard-earned allowance money at Poplar's Music Store buying Beatles singles. The 45's were orange and yellow and I bought every single one, and I even played the B sides.

I was obsessed. And The Beatles were mine.

If you don't know this about me by now, I am a music snob. I admit it. I am a snob.I don't know what half-baked acts anyone holds up from the nineteen nineties as being timeless. Mariah Carey? C'mon.

I watched a talk show the other day, where one guy argued that The Beatles were heaven-sent, and the other four imbeciles on the show started throwing out names like Aerosmith and the Oak Ridge Boys, for God's sake. Really? What universe do these people exist in? People can be so ignorant.

Trust me, if it wasn't for The Beatles, Steven Tyler would still be howling in a garage somewhere, and the Oak Ridge Boys would be garnering a dedicated following in Baptist churches all across the south.  And I like the Oak Ridge Boys.

For anyone who is too young to know, here it is: The Beatles changed music forever.

Here's their very first Ed Sullivan appearance (and I was there - well, in front of my TV, I mean):


I'm not going to enumerate all the great Beatles songs through the years, because I don't have time to search them all out on YouTube, but trust me on this. If you're planning to be shipwrecked on a desert island somewhere and you can only grab one artist's records on your way to the boat dock, grab The Beatles.

Steven Tyler and Joe Bonsall can just wave at you from the shore.