Nashville ~ On The Record 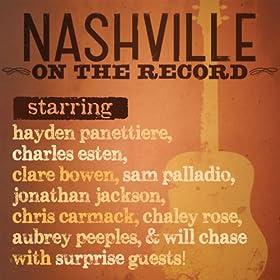 Here's what I like: Nashville (the TV show) - the music. The soap opera aspect of the show simply frustrates me. If you watch Nashville, you've probably noticed the disconnect. It's as if the writers forgot what they wrote only one episode before.

Take, for example, this week's saga. Deacon sidles up to Teddy at Rayna's concert and asks him to ruminate on his (their) daughter's birth. Now, mind you,only an installment or two before, Deacon had punched Teddy's lights out because Teddy and Deacon's "girlfriend" had engaged in a rendezvous in said girlfriend's SUV. Well, I guess, a few days later, all has been forgiven, because now Teddy is more than happy to wax nostalgic about their (shared) kid's entree into the world.

And everybody? Stop telling me how Deacon and Rayna really "belong together". I don't give a damn. I like the character of Deacon, but I'm sick to death of him latching onto the crumbs that soulless woman sprinkles across every middle-aged male country singer's county line. I'll accept that Connie Britton is a good actress - everybody keeps telling me she is - so all I am left to conclude is that she is supposed to come across as a heartless bitch.

Don't even get me started on Juliette and Avery. He's a decent guy, and she's just ripped his existence to shreds for no logical reason, especially seeing as how she "loves" him.

Scarlett? What can I say? Every viewer hates her - do the writers get that? The writers keep trying to get us to sympathize with her, but they are apparently staring blindly at some shiny object, while we're all left to hurl heavy objects at our TV screen. Scarlett's whiny and a self-imposed victim. Good singer, though.

Sign me up for Team Gunnar. Sure, he hasn't had much of a storyline lately. They all assumed he was too boring, so instead they tried to pump up Will and whatever-his-fake wife's-name-is story. But Gunnar is at least a songwriter and normal.

Nobody puts Gunnar in a corner. We all kinda like the "normal" people.

Which leads me to the original point of this post - THE MUSIC. Did you catch the Ryman episode? The one with the actors actually performing songs from the series?

Annoyingly, I've had some of those damn songs stuck in my head for a couple of weeks now - because they're really good songs. That, however, doesn't negate the irritation of having them swirling around in my brain.

So, taking the advice of some "expert", I've decided to banish those earworms by featuring some of those songs here.

And who better to start with than Gunnar?


This, however, is the song that has been bedeviling me. Stupid perfect song. Perfectly written. Perfect chorus, perfect verse, perfect transition. Damn.

I need to rid myself of this song - because it's too damn perfect:


Trust me - just buy this live album. Help me out here. Maybe if you listen to it enough times, I will finally be rid of it.

I can't take much more of this excruciating, sublime madness.