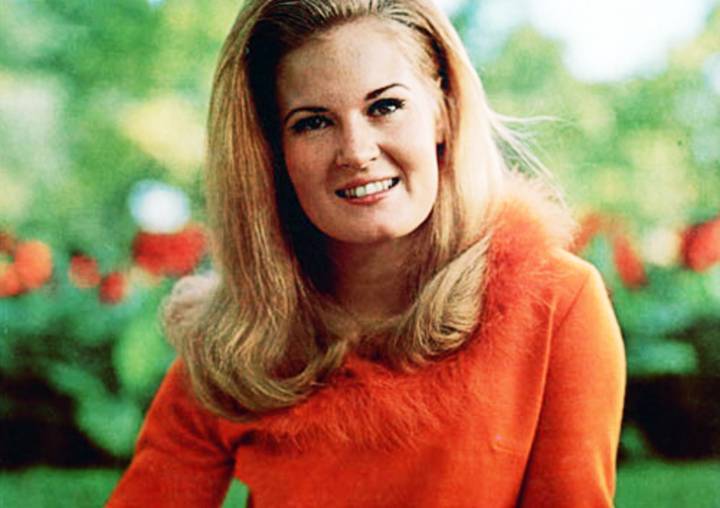 “I am a huge fan of Lynn’s,” Reba McEntire said. “She was always so nice to me. She did so much for the females in country music. Always continuing to pave the road for those to follow."

In the country music world of the sixties, there were essentially two tiers of female artists. The top tier consisted of Loretta Lynn and Tammy Wynette, who got all the press, good and bad. The second tier, and the chart gobblers, were Connie Smith and Lynn Anderson. I'm not saying Connie and Lynn had more top ten hits than Tammy and Loretta, but I'm also not saying they didn't. Look it up.

In my research today, I came across a site where a guy listed his thirty-six favorite female artists from the nineteen sixties, and he didn't even include Lynn Anderson! Number one, I didn't even know there were thirty-six female artists during that decade (well thirty-seven, ahem), and number two, the dude is either a hater or a dweeb. He even listed Jeannie C. Riley, and she only had one hit!

But that's sort of the story of Lynn's career. It seemed to me at the time that she didn't garner respect from the Nashville establishment - of course, they hated Buck Owens, too, because like Lynn he was from, of all places, California! And don't even get them started on Bakersfield's Merle Haggard, although they pretty much couldn't ignore him after awhile (snicker). Connie Smith was always placed on a pedestal, as she still is, and rightfully so. I love Connie Smith. It didn't hurt, though, that she had the backing of Bill Anderson, a songwriting and Nashville god. Meanwhile, Lynn just kept racking up the hits.

People remember Lynn Anderson, if they remember her at all, from her nineteen seventies hits. I prefer the tracks from her Chart Records days, before she moved on to bigger, shinier Columbia Records. Chart Records was an independent label that had the good taste to sign artists who were languishing without a deal, for no apparent reason other than that some of them were from California. LaWanda Lindsey, whom you've no doubt never heard of, had her first hits on Chart Records, before, like Lynn, moving on; in LaWanda's case to Capitol. Look her up sometime. Needless to say, I was a big Chart Records aficionado.

Lynn was born in Grand Forks, North Dakota (like me) to songwriting parents, Liz and Casey Anderson. Liz wrote "(My Friends Are Gonna Be) Strangers" for Merle Haggard. He liked the song so much he named his band after it. Liz also wrote "I'm A Lonesome Fugitive" for Merle. As a kid, Lynn's family moved to California (gasp!) and Lynn later became a featured vocalist on the Lawrence Welk Show (Lawrence, like me, was from...well, you get the gist.) As an aside, my mom always claimed she was a cousin, a few times removed, of Lynn's. I never did obtain definitive proof, so it may be a wishful fable.  Oh, and my last name, too, is Anderson. Whoo! Eerie! (kidding).

There was never a time that the Lawrence Welk Show wasn't thought of as cheesy. I certainly considered it so. But Mom and Dad loved it. Again, it was the sixties, so there were three major broadcast channels. Therefore I am willing to cut Mom and Dad some slack. But honestly, where was a young California girl to go to launch a singing career? She wasn't seasoned enough to join Buck's stable (oh, that doesn't sound good - I mean, stable of artists). So, network exposure? Why not? She was the only good thing about the show, except maybe for that ragtime piano player, who fascinated me as a kid. Yea, I took accordion lessons, too; no doubt my dad's decision was influenced by that damn show. Thanks, Dad. If I remember, when I wasn't snoring into my floor pillow, Lynn only got to do one number per week, but it was the highlight of that snooze-fest. And Lawrence seemed to like her.

This show was where Lynn introduced some of her first hits.

Wow, she looks like a little kid here! I was such a dork, I learned all the words to this song.

Okay, one more. Both of these songs were covers, but what the heck? (I never learned how to do this, by the way.)

Yes, she is lip-syncing both of these, but maybe Lawrence didn't have a steel guitar player. Also, I guess a drum kit isn't the only thing that has a "high hat". But it was the conservative sixties - conservative in some corners, including my parents' living room.

Soon Lynn moved on to bigger things like Hee Haw? I guess you had to be there.


Liz Anderson wrote this song, along with many of Lynn's early hits.

Naturally, all the songs I love have no live performance videos. Lynn was at her best on ballads. She had the voice of an angel.

When Lynn married Glenn Sutton and moved to Columbia Records, somebody (I'm not pointing fingers) picked out for her some inferior material.

It didn't start out too badly:

At least this track had a banjo (when banjos weren't de rigueur, like they are now, to prove that country artists are actually country - doesn't really work).

She even dusted off an old Johnnie Ray torch song from the fifties (yea, I don't know how I know that, either):

I can't blame Glenn Sutton for Lynn's omnipresent hit from 1970. She picked that one out all by herself. Written by Joe South to be sung by a man, Lynn was enamored by it and insisted on recording it during a session which had fifteen minutes left and no more songs to record. I didn't like the song then; I don't like it now. But that's just me. It's...monotonous? And imagine hearing it fifty times a day on the radio. One would get sick of a song real fast, even one they initially liked.

Nevertheless, this recording cemented Lynn's career. So, who am I to quibble?

Some of the Lynn Anderson albums I own?

(It really doesn't look this goth in person.) I most likely own more.

I am a Lynn Anderson geek. I love Patsy, I love Tammy, I love Connie Smith; but I never felt the personal connection with them that I did with Lynn. Time (decades?) goes by and we get distracted by life. I hadn't listened to a Lynn Anderson track in years. And then I read that she'd died. She was only sixty-seven; far too young. Lynn had some hard knocks along the way; I'm not interested in rehashing those.

A lot of artists don't get their due. I don't know why that is. I don't believe Lynn got hers. She only drew attention when she became a pop star. Everybody missed the beautiful country recordings that came before. Well, not everybody.

Memories come tied with raffia - often pretty, sometimes rough to the touch.  This news is rough, but the music is so pretty.