Book Review: "Reckless: My Life As A Pretender" 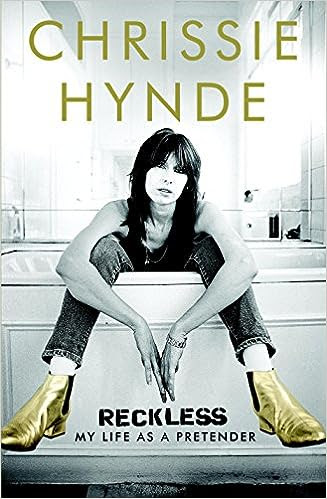 In the interest of full disclosure, I haven't quite gotten to the end of Chrissie Hynde's book. I'll admit, I'm struggling. It started off great -- Chrissie is from the same generation as me, so I could relate to her early experiences, up to a point.

You know me -- I'm a country gal. The only reason I'm shaking hands with The Pretenders at all is because my husband kept goading me into listening to them. What sealed the deal was his insistence that a certain song of theirs defined our relationship:


That was my introduction to The Pretenders.

As a known dolt, I realized I'd heard The Pretenders before, but my brain didn't register who exactly they were or why I would, in my teeny country brain, care. But then we went to see them in concert. It was a bit surrealistic -- I was more a Dwight Yoakam torn-jeans screaming hillbilly, but I was open to new experiences. I remember Chrissie coaxed comedian Sarah Bernhardt up on the stage for some unfathomable reason, and Sarah said something that flat-lined - an abnormal blip in my cerebrum, but I overlooked it because my husband was a fan of The Pretenders, so I was keen to go along. I figured HE got it and that I was sorely out of touch.

But I liked Chrissie because she was balls-out. She was a rocker - a FEMALE rocker - which is an other-worldly anomaly.  Chrissy fascinated me.


But, alas, her autobiography is so timid that it deflated any notions I had about her. I mean, this gal is as insecure as me! And that's saying a lot -- of bad things. It's not that I can't relate. I blame myself for basically everything I've ever done or haven't done. But I wanted more -- more girly bombast. Chrissie is so self-effacing, she's opaque. The entire book is about the "others" in her life -- sort of how I would write my autobiography -- tucking myself inside a pocket and letting Dad or Phil Bedore (my former boss/nemesis) or George Strait speak for me.

And the drugs....I'm no hypocrite; I have my own drugs, like, or DEFINITELY LIKE nicotine...and beer. Is sleep a drug? If so, add that to my ledger.

But it seems like Chrissie would pop or smoke anything, pulsing plasma be damned; just to get a high. I'm no prude, seriously. But I've always had a bent towards not dying -- call me crazy. The "not dying" thing kept me from doing sundry things that would have me writing this (on a cloud) from heaven or some form of hell.

Label me "not on board". If smoking or swallowing something is all that life is, in between functioning as a bad waitress, that really downgrades the impact that Chrissie has had as a punk, or a rebel, or as just a "rhythm guitar player" (like she chooses to identify herself).

I understand self-loathing. You know me -- I'm a failed everything. But Chrissie should have stood up and embraced who she was. That's what I wanted out of this book.

Instead I got a bunch of stories about other people, in which she was an observer.