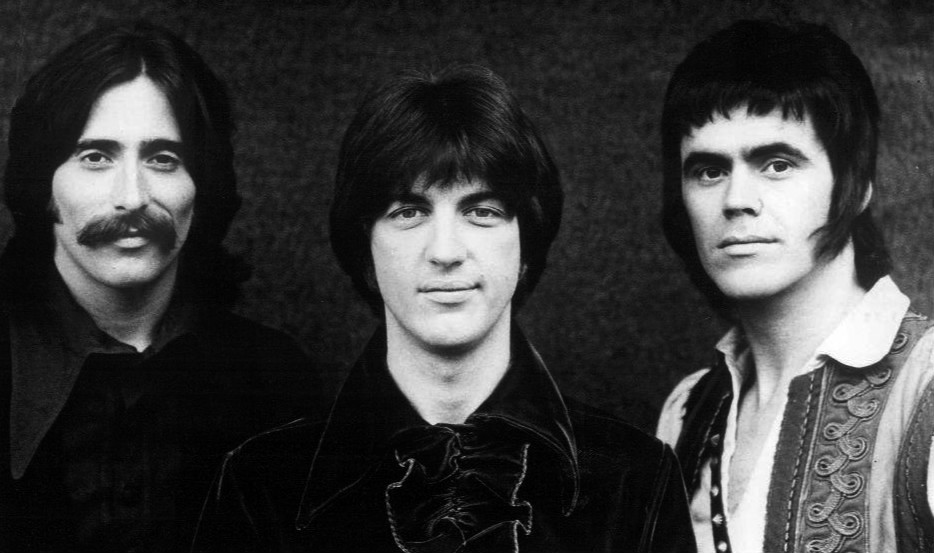 By the time Three Dog Night came along, I had slipped the cusp of rock music. But one was never disconnected from pop culture in the late sixties/early seventies, because variety shows still existed and we only had three channels, so the latest sensation was impossible to miss. And music was everywhere, whether one wanted it to be or not. Music was playing on somebody's transistor radio on my school bus. Bands performed on the Tonight Show, in the last few minutes, when I was supposed to be asleep, but I threw caution to the wind and stayed up late, lying on my side with my little portable black and white TV on the table next to me, Mom's rules be damned.

So of course I heard Three Dog Night, but I was a mite confused as to who exactly was Three Dog Night and who was Blood Sweat and Tears. I quickly understood that BS&T were a pseudo-rock group, whereas Three Dog Night were the real deal. (There was a lot of that pseudo stuff in the sixties - people jumping on the bandwagon, looking for that number one single on the rock charts, when they should have been performing in a jazz club or doing old standards in front of a big band. That always irked me about the "rock" of the late sixties. The door was open and anyone could come in, and the old people liked the whole Up Up And Away vibe, because it wasn't threatening. But it wasn't rock. At least country smacked you in the face with its authenticity and didn't give a damn whether you liked it or not.)

But I had to hand it to Three Dog Night. They didn't write their own songs, but they were good at picking them. They chose from Randy Newman and Hoyt Axton and Harry Nilsson and the other guys who were pounding the pavement, trying to convince anybody to record their compositions and make enough money to go on to do the soundtrack for Midnight Cowboy.But as any songwriting loser (such as I) will tell you, it's just a song unless you got somebody awesome singing it. Three Dog Night was pretty awesome.

Cory Wells died this week. The band was supposed to be playing a show a couple of miles from where I live, but the performance was postponed due to the "illness" of one of the band members. My husband saw Three Dog Night in concert once and he said it was one of the best shows he'd ever seen. I never got to see them, and now I won't. GO SEE PEOPLE WHEN YOU HAVE THE CHANCE. The chance doesn't last forever. I once wrote a blog post about artists I wish I'd seen live. I've decided that I won't have any more "wishes". If I have the opportunity to see somebody special, I'm going. Shoot, people, time is running out!

Self-absorbed teenager that I was, I didn't realize that Three Dog Night had three lead singers. It never crossed my mind that one song sounded different from the other. If the DJ said, "Three Dog Night", I thought, okay, it's hard to imprint that sound on my brain, but that's just because I'm an idiot. Never once crossed my mind.

But Cory Wells was a good singer, now that I understand which songs he fronted.

And this Randy Newman song:


In hindsight, of course, I can certainly hear the diverse voices of TDN. Like this:


One has to understand the times to grasp the utter hate I had for this next song. I'm not begrudging the band for this monster hit; I'm just saying it sucks. And it especially sucks after hearing it nine thousand times. The song was everywhere - radio ad nauseum, TV, any juke joint (okay, diner - I was a kid) one would step inside, Grocery store, Woolworth's. I maintain Hoyt Axton wrote it as a joke. I could be wrong; the times were rife with "substances". But here's the thing about this song: it's monotonous. It's not good. Three Dog Night gave it their all, and bless them, they scored a number one that refused to detach itself from the charts. But the song scarred many of us. It marked the end of pseudo-pop. It drove some of us into the arms of Merle Haggard and even George Jones.

There's a special place in hell for this song, but kudos, Hoyt Axton! My memory is long, and I don't forget.


(I'm sure it would be fun in person, though. Everybody knows the words.)

Another era ends. The era of late sixties/early seventies pop or rock or whatever we called it. (We just called it rock, FYI.)

And Cory Wells, you were a great singer. I wish I'd seen you in person. Thanks for leading us through some pretty bad times in music by lifting us up and giving us something good to grasp onto.