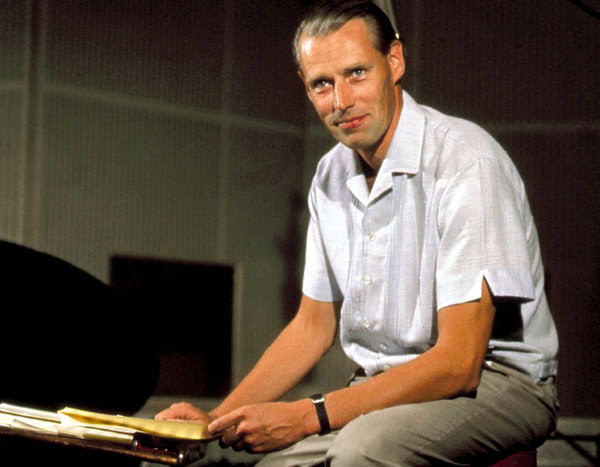 The Beatles weren't exactly a garage band. We've all read the stories of how they cemented their musical bona fides in Hamburg, Germany; a grueling two year span in which they succeeded in dumping their pretty boy non-musician, Stu Sutcliffe, crowning Paul McCartney the official pretty boy of the band; and sneaking into the recording studio while Pete Best was out buying drumsticks, and slipping in a sub, Ringo Starr; thus relegating poor Pete to the crypt of history.

So, no, they weren't a garage band. They had something, but it was still a run-of-the-mill something. Then they got signed to Parlophone Records, or Capitol Records, as we Yankees know it. My brother basically introduced me to the Beatles' albums. No, he didn't introduce me to the Beatles -- my AM radio station did that. I heard "I Want To Hold Your Hand" and "She Loves You" on KRAD, tinning through the speaker of my tiny transistor radio, and I thought, well! That's new and different!

But albums? What nine-year-old could afford to buy albums? I could barely swing a 45 every couple of months. My brother, though, he had them all. I think it was called The Beatles' Second Album, which in hindsight, is not a catchy title, but it was the early sixties, so marketing was rather slap-dash; that I became in awe of the group. I thought, wow, "Roll Over Beethoven" and "Please Mister Postman" were really cool original songs. I had many miles to travel before I would become a musical encyclopedia. Years and embarrassment have since set me on the straight and narrow.

A Hard Day's Night was the next one. I didn't like the cover, but wow, it featured some really great songs.

And it was apparently a movie, too! Who knew? Not me. I didn't go to movies. My mom took me to see Mary Poppins. That I remember. Unfortunately, I wasn't old enough to be independent, so I never saw A Hard Day's Night until well into my twenties...or thirties.


Famous for its feedback:


The reason I particularly remember these last two is because they were the A and B sides of one of the few single records I owned.

People point and jeer at me because my very favorite Beatles album of all time is "Help!" I don't care. It is, and I stand by that. By the by, "Help!" was also a movie! I knew that at the time because I was older by then. Old enough to go see the movie with my very best friend. My ten-year-old review? It wasn't as bad as Elvis movies, but it wasn't all that great, either. Nevertheless, the album still holds up. It had a continuity to it. Maybe the Beatles didn't intend for it to have one, but in my whole ten years of musical experience, I'd never before heard an album with continuity, and I didn't even know what the word "continuity" meant.

My favorite (of all time) Beatles song? From that album! Here it is (sorry, no performance video to be found, but still):


"Help!" also featured this song, and a lot of people think it's one of the greats. Eh, don't care. I wasn't into rock and roll to be lulled by a viola, but you be the judge:

Then came Rubber Soul. Well, could it get any better? Rubber Soul was the peak of my Beatles mania.

These two songs were recorded for the Rubber Soul album, but weren't included. Why am I including them? Because they were, once again, the A and B sides of most likely the second 45 I ever bought:

The Beatles - Day Tripper by bebepanda


I fell in love with my husband over these two songs. They were the "A" and "B" sides of one of my paltry collection of 45's. (Sorry for the double video post, but I didn't realize the second one was an instrumental track only, and I can't figure out how to delete it.)

Little kids digest music differently from adults. Hello? Yes, it's true. Kids can't quite fathom what the words mean. Sure, they ponder them, but they usually get the meaning all wrong. What do kids know? Really, for a ten-year-old, lyrics are just placeholders. The Beatles could have sung, "la la la" (which they actually did on some songs) and it wouldn't have mattered to me.

Sure, I pondered what the words meant, but I couldn't decipher them. A real Nowhere Man was like the grouchy octogenarian who yelled at my best friend and me when we strolled past his house, minding our own business; not, mind you, even touching one toe to his freakily cultivated lawn. Just a real pain in the ass; hassling little kids.

I also didn't understand why some girl told John to sleep in the bathtub, but sure enough, no more than a year later, I, too, tried sleeping in the tub. Then I understood why John sounded so maudlin when he was hiding his love away. Bathtubs are supremely uncomfortable for sleeping in! The only thing I knew about that song at the time was that John was apparently trying to imitate Bob Dylan, who I only knew because (again) of my brother.

Additionally, I instantly knew that I didn't like the song, "Michelle", because that was my name and that was simply embarrassing. Sure, the Beach Boys were fine singing about Rhonda, but leave me out of it!

The most enduring song from Rubber Soul was one to which I never gave a second thought, at my young age. I liked a good beat! I liked "You Won't See Me" -- still do (speaking of "la la la's").

It took me a bit of growing up to appreciate this one:


Revolver came next. It wasn't as good as Rubber Soul. In hindsight, it did have some great songs, but at the time (I'll go with age eleven), the only track I really liked was:

Trust me, however -- "I'm Only Sleeping" is great. No performance video, unless one counts Beatles cover bands -- which I don't.

The Beatles were strange, in that, some of their best later songs weren't album tracks; such as "Penny Lane". Maybe somebody at Capitol could tell me why these, including "Revolution" weren't deemed good enough to be included on albums, but come on! A round yellow and orange disk didn't quite do them justice!

By the time Sgt. Pepper came along, I had moved along. I was in the eighth grade and I bought the album for my brother for his birthday. I wasn't, myself, interested in owning it, and I never did. My brother was nice enough to tell me it was "okay". Some people claim it's the best Beatles album ever. I couldn't tell you. Then came the White Album, which my husband swears is the Beatles' best. Don't know.

My Beatles education ended with Revolver. And with some single releases that came soon after.

So, what does all this have to do with George Martin? What doesn't it? As I said at the beginning, the Beatles were a good band, like a lot of good bands. The Dave Clark Five was a good band. What did the Beatles have that the DC5 and Herman's Hermits didn't have? They had Sir George Martin taking a little seedling and turning it into a fully sprouted redwood. John and Paul could've written Please Please Me's until the cows came home; but George Martin challenged them to climb higher. And they did. This producer gouged out the innate wondrousness these two guys didn't even know they possessed.

That is a legacy.