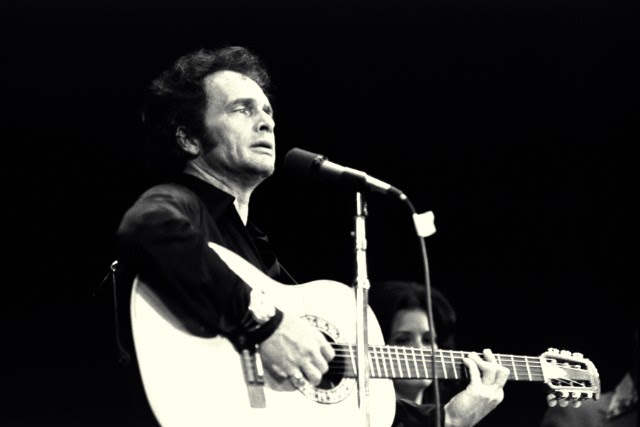 In my quest to find Merle Haggard videos, the fact is, there is what there is. I've been lucky so far, but YouTube unfortunately doesn't contain every song in the word. Wouldn't that be great, though? They should work on that.

Merle had a lot of great songs that didn't find their way to video. I'm not ignoring them; I just can't find them.

But let's continue down the road, shall we?

Imagine my surprise as a kid just learning to play chords on a guitar to find that this next song only contains two chords. I'd had it drummed into me that every country song (this was the sixties, mind you) had three chords. Three. Three was the requirement. Callouses hadn't yet formed on my fingers as I played along with Merle's records, so this discovery was a revelation! I could play this song easily, and it would barely hurt!

Seriously, The Bottle Let Me Down was deceptively simple. Simplicity was Merle's magic, and no one could conjure it like he could. I like this video a lot, because it features the original Strangers. Much like the Buckaroos, the Strangers were stars in their own right. Merle never hesitated to give credit where it was due.


It was around 1968 that the country music industry finally, probably reluctantly, sat up and took notice. There was a club in country music in those days -- the "Nashville Club". They liked things the way they liked them. They liked silky strings and the Anita Kerr Singers. "Keep it soft!" they exclaimed. "What's with this Bakersfield shi stuff? Those loud guitars hurt our ears!" But the charts didn't lie. Not that Chet was about to adopt this rabble-rousing style, but people, he supposed, wanted what they wanted. And they wanted something like this:


"Mama Tried", of course, was the song with which I embarrassed myself in front of Merle. In my defense, I was a giggly (barely) teenager, and Alice and I logically assumed at the time that Merle would be impressed by us playing his record on my battery-powered turntable outside, feet away from his motel room. In hindsight, I think he just wanted to be left alone. He was right to not acknowledge us -- that would have just encouraged us.

I wonder if part of why people love Merle is that his songs are so accessible. When I stuck my guitar away in the closet, I didn't pick it up again for...hmm...twenty-five years? I had a living to make and babies to raise. When I did pick it up after all that time, I had two go-to songs. This was one of them:


If Merle had never written another song, this one would be a career. I wonder if he knew it at the time. He never released it as a single, weirdly. I didn't realize that until I read about it. It was the B side to The Legend Of Bonnie And Clyde. I also read that it failed to chart. I don't get it. If it was never released as a single (an A side), how does everyone know it? Yet everyone does. It's almost impossible for me to choose a favorite Merle Haggard song, but if I was forced to, "Today I Started Loving You Again" would be it.

I remember the 1970 CMA's. I'm sure I was bouncing in my chair watching the telecast, because Merle took home everything except female vocalist of the year. This next song probably put him over the top. I talked about it a bit in my last post, and I'm ambivalent about it. Honestly, the song was rather mundane; not, in my opinion, Merle's best effort. But it struck a chord with fans. Part of my ambivalence, too, no doubt, is that I heard it on the radio constantly. Everyone's got a song like that. They liked it the first time they heard it, and the tenth time. By the one thousandth time, they were ready to grab a claw hammer and smash their radio to smithereens. Okie From Muskogee wasn't that song for me - Rose Garden was -- but familiarity breeds...well, you know.


I was always a libertarian. I didn't care what other people smoked. I didn't know about that stuff anyway. I didn't even start smoking regular cigarettes until I was sixteen. I didn't wave Old Glory down by the courthouse, because I wasn't a freak, plus I didn't even know where the courthouse was, frankly. The song seemed jingoistic. And Merle didn't believe that stuff anyway (read his autobiography). Nevertheless, the song forced people to take notice of him. I'm sad, though, if this was someone's first exposure to Merle, because that means they missed a lot of great music.

The next year, Merle continued his roll. Now he was mad -- fightin' mad. The best part, for me, of The Fightin' Side Of Me was the live album Merle recorded in Philadelphia. I wore the grooves off that album. I could probably, even today, quote some of Merle's lines from that recording. That was the album on which Merle impersonated Marty Robbins, Buck Owens, and Johnny Cash. Oh, and Hank Snow. By then I was wondering if there was anything Merle couldn't do. Too, Bonnie Owens had a prominent role. She doesn't get any credit from anyone, but Merle would have given her credit. The harmonies on his songs from the sixties and early seventies? Thank Bonnie Owens. She was his sound and his sounding board. She co-wrote Today I Started Loving You Again. Maybe personally things didn't ultimately work out for Bonnie and Merle, but harmonically, they were perfect.


Merle was always cantankerous. That never left him, throughout the following forty years of his life. I like that. He had opinions. This song seems more honest than Okie. And from a songwriter's perspective, it's a better song.

The hour is late, and I can't do justice to many more songs. I'll save that for next time. However, I've got one more. I mentioned my two go-to songs of Merle's. This is the other. Like "Today", this song was never released as a single. This flummoxes me. Then how did I know it so well?

I am not a good singer -- not a natural singer. I love harmony singing. If I could be granted a wish, well, I guess I would wish for unlimited money, but after that, I would wish for the ability to sing harmony. This song, though, made it so easy. Any dolt (meaning me) could do it. Not just two-part, but three-part harmony. All praise to the songwriter for that. Again, listen to the simplicity. Maybe that's what makes it so good.


It's a big job just gettin' by with nine kids and a wife, but that's a song for another day....