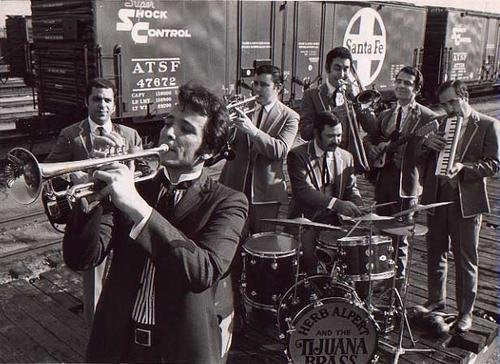 The years 1966/1967 were transitional ones in the music industry. By 1968 one would never hear a song on the radio that wasn't "sanctioned" by the keepers of the groovy rock and roll flame. In 1966, still though, one could hear songs that didn't exactly fit the mold. That's probably why people of my generation have more eclectic musical tastes, whereas the current generation of radio listeners don't stray from their worthless pile of crap (oh sorry, editorializing again). It's why I can appreciate Frank Sinatra and the Glenn Miller Orchestra, in addition to Dwight Yoakam and the Beau Brummels (look it up).

So, while a wide swath of the year-end chart was filled with rock (or more correctly, pop) songs, a few strays managed to wander in.

And here they are:

This instrumental was recorded by a group called the T-Bones. Instrumentals were also a dying breed by this time. The last big instrumental hit I remember was in 1968, when the Ventures recorded the theme song for Hawaii Five-O.  Nevertheless, this is called "No Matter What Shape":


The main reason this track sticks with me is because it was also used in an Alka-Seltzer commercial. Yes, TV to a child of the sixties was like God speaking from heaven (sadly but truly).


Remember Andy Williams? Yea, I don't much, either. He did a lot of Christmas specials and he introduced the Osmonds to a national viewing audience, but I never watched his show. Sorry, I did have to draw the line somewhere. I did like "Moon River", though. My main beef with Andy is that he recorded possibly the worst Christmas song of all time. Christmas songs are supposed to be pretty. This one was jazzy, and not in a good way. The sound system at my previous workplace used to play it at least five times a day, and I had to be restrained from smashing multiple computers. I deigned to never learn the name of the song and I hope I never have to hear it again.

Be that as it may, Andy had a hit with this next song in 1966. I'm tempted to say my seventh grade choir had to learn it - I could be wrong. We learned a lot of really bad, bad songs.


I always loved Herb Alpert and the Tijuana Brass. So sue me. Herb had a great gig going for a few years, playing with his brass-mates. I bet he rolled in zillions (maybe not quite that many) dollars playing his trumpet. Later, unfortunately, someone convinced him he could sing, and he did "This Guy's In Love With You". Really painful. He redeemed himself, however, by forming A&M records with some guy whose name started with an "M"...Hold on....Jerry Moss. A&M Records is most famous for recording the Carpenters, and sadly, the Captain and Tennille. But let's get back to the Brass:


How can that song not make you want to get up and do a mean syrtos, kalamatianos, pyrrhichios, hasapiko or sirtaki? (No clue, really, but thanks, Wikipedia!)

This next song isn't "quirky", but rather, "good". It was more of a surprise, because Bobby Darin was that finger-snapping guy who did "Mack The Knife". Yet here was a new Bobby Darin. Sadly, Bobby died young. But he left us with this:


Shockingly, a country song also made the Hot 100 in 1966. I would embed it here, but the only performance video is unembeddable (please tell me why).  Suffice it to say that "Almost Persuaded" by David Houston was apparently huge in not only country corners but on the mainstream charts as well. I attribute that to the piano riff, which will live in the memories of old folks like me forever. If you are interested in learning about David Houston (who also, like Bobby Darin, died far too young) and why this song was a hit, click here.

Nancy Sinatra tried hard to be a singer. She recorded a bunch of songs with Lee Hazlewood; songs that weren't bad. She wasn't a natural singer, but how many of us really are? Not me! And she managed to score a hit that will linger forever in campy history. I think I did a karaoke version of this once. I'm sure I was drinking....

Are ya ready, boots? Start walkin'!


If a little kid can be jaded, I was soooo jaded about a Petula Clark song in 1964. I remember shopping with my mom ~ there weren't shopping malls then ~ you had to trundle out into the snow and enter the department store through a frosty glass door ~ and every display shelf where I lingered, I heard, When you're alone and life is making you lonely, you can always go..............downtown.

Okay! Dang! I got it! Geez, I just want to go home! Stop torturing me!

So, I may have a bit of a misplaced dislike for Petula. But she was actually a really good singer and it's time to get over it. So here's Petula's hit from 1966:

I admit, I always found Lou Christie to be..okay, creepy. A good falsetto I can appreciate. Heck, Frankie Valli made a living from it. Maybe it was the songs. The weird thing is, he recorded a song that I love love love, that I only found by watching the movie, "Rain Man". I've probably already featured "Beyond The Blue Horizon" once or twice or more in this blog. I don't get why Lou didn't do more songs like that. But let's go with the 1966 hit that I guess made him some good dough:

Sam the Sham was a good moniker for someone whose real name was Domingo Samudio. Again, I was a kid, so I didn't know that sham meant "phony". He wore a turban, so I thought "sham" was some kind of royal title. Every frat house movie ever made puts more jingle into Domingo's pocket, because "Woolly Bully" is the ultimate party song. But that hit came before 1966. I bought this next single and I don't even know why, because I don't really care for it. Again, I apologize for the bad, out of sync video, but it's all I can find:

Okay, this (this!) was the number one song of 1966. I'm very patriotic but I'm also a music lover. It's a delicate balance. If you grew up around my time, all you heard was Viet Nam, Viet Nam. My big brother enlisted in the National Guard so he wouldn't have to go to Viet Nam.

Da Nang, Saigon. The Ho Chi Minh Trail. It wasn't a Robin Williams movie. It was all a mistake, a blunder. Thousands of our finest men got killed for nothing. Nothing. And it was a reality that thundered in our ears, day by day by day.

I became pen pals through one of those back-of-the-magazine ads, with a soldier who was deployed to Viet Nam. I was barely a teenager, and had no right to even pretend to understand what those guys were enduring. I hope he came home okay.

Sergeant Barry Sadler, who I don't know anything about but would like to learn, somehow, perhaps through serendipity, recorded this song. In 1966 everybody hated everybody ~ the hippies hated the old-timers and John Wayne sure as hell hated Jane Fonda. Everybody basically did.

As a music lover, I cringe at this song. As a patriot, I'm going to cut it some slack:

I didn't mean to get all heavy on a topic that was supposed to be fun. 1966 is a snapshot. It was what it was and we can nestle in its bubble and listen to the Monkees, or we can appreciate it for its jagged existence.

On the happy side, I appear to have missed some fine hits from 1966, so I just might do an addendum.

Just to get out of this funk.